Swimming and galavanting a Brew Hut. Featuring Some Work, too.

As a frequent user of huts and trails, it’s always rewarding to contribute a little maintenance. Somehow I still hadn’t made it to Brew Hut after a couple years of VOC membership, so a work hike organized by our huts coordinator Lianne McRadu provided a great opportunity for a purposeful visit to Brew. The trip coincided with Christian Veenstra’s tempting re-peat attempt at the Ungulates Traverse after last week’s Zum Peak Fiasco, but having still not figured out a good way for me to be present in two places at once, I stuck to my commitments with the workhike and left the Ungulates for a later finish.

The objectives were pretty straightforward: a new coat of paint for the floor, a new stove-pipe to replace the corroded old one, some stove maintenance and the very jolly task of emptying the contents of Brew’s “water closet”. Lianne, Roland and Sarah Chay were already up at the hut applying the first coat of paint when Martin Matej, Camila Posada, Isabel Verse, Shane Duan and I were leaving Vancouver on Saturday morning to meet them. We found a pile of gear to haul up on top of Roland’s jeep, at the trailhead. Figuring I wouldn’t have many opportunities to hike with a stovepipe, I volunteering to strap it to my pack. Secretly, I was hoping to encounter a bear on the trail and was imagining his funny reaction at seeing a weird elongate creature bobbing along. Martin, only up for the day, bravely hauled up a guitar he so kindly donated to the Brew Hut, making his day pack a rather bulky affair. Other items were distributed amongst the five of us and we set off on the trail. 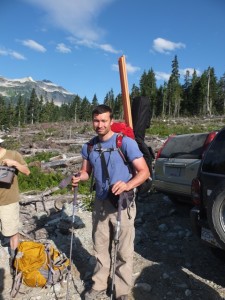 Martin, with his extra heavy day-pack loaded with items to bring to the hut.

A little while later we arrived at Brew Lake, where the cool clear waters proved irresistible. We splashed in the lake with delight, swimming across the lake and joking about the hard “work” were were doing on this work hike. 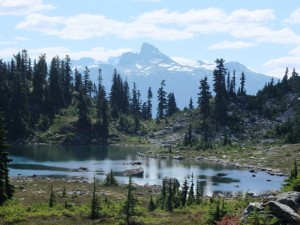 Brew Lake and its lovely swimming waters under the Black Tusk

After a very refreshing dip we finally pushed on to the hut where Roland, Lianne and Sarah were lounging about, waiting for the paint to dry. I relished the view from the hut. With its great views to so many peaks surrounding the Sea-to-Sky, it gives a fantastic vantage point of many familiar areas. Apparently Brew is notorious for winter whiteouts, so I’ll remember the view next time I’m up there and can’t see further than my toes. 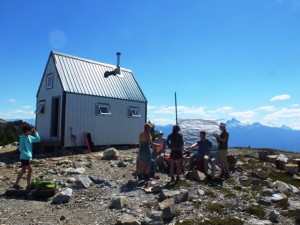 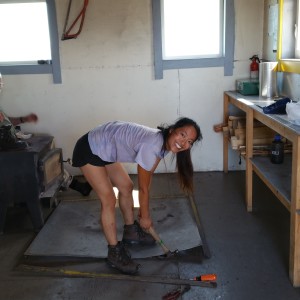 With so many helping hands, we split up working on the little jobs on the to-do list. Now you’re maybe curious about what emptying the contents of an outhouse. Or maybe not … In any case, no need to give elaborate descriptions here lest I ruin the suspense which may draw you to be curious and volunteer to do the job next. Fortunately a good breeze kept the worst of the odours at bay. The only detail necessary to mention here is that cleaning out the w.c. was a good opportunity to confirm that throwing plastic trash down the hole is a pretty stupid thing to do as it makes the job for whoever has to deal with it a bit annoying.

With another coat of paint and the new stovepipe installed in our beloved abode, there was time enough for some galavanting in the hills around the hut. Kevin Woo showed up about that time, having arrived on his own from the city. He joined a group of us that quickly tagged Mt. Brew, which I have to say is equally worthwhile as a bushy summit as the inspiring ascent of Zum Peak last week. Back at the hut, Lianne, Isabel and I decided to go for a long hike out to Hops and Keg Peaks, while the day-trippers made their way back down to the car. Around the same time, a large party of 13 Squamish locals celebrating a birthday showed up. They were very appreciative of our efforts on hut maintenance, and for such a large group of partiers, were actually pretty quiet! 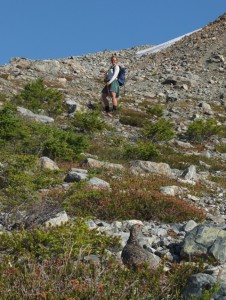 Isabel looks down at a grouse hen. See if you can spot it. Her three chicks are nearby (not visible).

Upon returning to the hut, a lot of us “swam” in the little puddle of remaining snowmelt below the hut. Very refreshing! Suitably clean for a civilized dinner, we ate some grub, played some cards and sang some songs, confirming that a hut is a better place when a guitar is available. Thanks Martin! 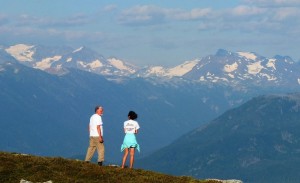 We tucked in under a cloudless, moonless night. After an early wake-up, we ate, finished the last coat of paint and packed out. Stopping of course for another swim at Brew Lake. Lianne passed me some brush-clippers, which brought me much entertainment as I bobbed down the trail doing my part at keeping our ascent route from devil’s club and alder invasion.

All things told, this was a very fun weekend. Lots of swimming, amazing views and enjoyable mellow hiking. It was rewarding to contribute a bit to the hut, and great company made the whole affair a very fun weekend! Thanks for everyone’s efforts!