It was pitch black when my alarm went off, way too early. That’s the way every good VOC trip starts, but in the moment it didn’t make it any better after only getting 2 hours of sleep. A special pre-trip breakfast of mac and cheese was eaten, and then my roommate Claire and I geared up and waited for our driver Matteo’s text.

Loading the car, picking up Mitch, casual chatting, and meeting up at a Pemberton Coffee shop with the rest of the group were all a blur as most of the car ride was spent sleeping. Interspaced with it were periods of waking to gorgeous scenery of red diffused light and blue snowy shadows over mountains, and Matteo’s energetic house music pumping in the background.

Upon arrival at the trailhead however, the cold air and snow was more than enough to drive off any sleepiness. I quickly learned how to receive and send signals from my avalanche beacon, and wear my skins and skis. Everyone was ready, and the morning light was getting stronger as we started up the logging road, with Sandra and Spencer sweeping with an attempt to find a lost card wallet. Due to a gear mix up, Claire didn’t have poles and used mine while I practiced working on my balance. Katie helped us learn how to use skis and lengthen our stride, while we kept a comfortable pace during the gradual climb, stopping for breaks and to regroup somewhat frequently. Katie expertly dealt with a painful blister on Claire’s heal around noon, but it was still giving her pain in her too-small ski boots. Lunch was eaten with rapture, and potato chips, chocolate, and shortbread cookies were traded with cheerful smiles. We continued on the road for a while longer, crossing the stone bridge, but the front group (Nick, Stuart, Christoph, Katie, Matteo, Jake, Tim, and Mitch) and back group (Spencer, Sandra, and Claire) grew further and further apart. Somewhere along the way Nick gave me one of his poles, making creek crossings a lot easier. It was on the trailhead after the log bridge that Stuart said he would hang back to wait for Spencer’s group. Wanting Claire’s company the rest of the way, I told Stuart I would slowly continue through the meadow and wait for them to catch up.

I spent a lot of time examining the large feather-like ice crystals (hoaring crytals according to Katie) on the snow’s surface, avoiding the frequent piles of elk poop, crossing creeks, and admiring the view of the mountains and cloud layers at the mouth of the valley. The meadow was a tangle of roots and shrubs with the occasional boulder, and it was a challenge with my clumsy ski feet (aka I feared for my eyes and fell, a lot). After a few hours the sun was sinking quickly and I began to get nervous at the forest’s edge – I was sure that Spencer, Sandra, Claire and Stuart would have caught up. I didn’t want to continue sitting and get cold, but I also didn’t want to backtrack through the meadow in the dusk alone, and accidentally twist something. And the hut was a beautiful goal.

Since I had done the switchbacks before, I didn’t see a problem with doing them now. I had my pack and emergency gear on my back, and I could take snack breaks as needed. But let me just say, that hiking up in early November, and skinning up in late November in the dark are two very different games. Although I thought I could get up a little after dark, I completely lost track of time as I made me way through the snow. After some frustrating attempts to skin on steeper sections with rocks, I took off my skis and used them like poles for stability. Only then did I appreciate the arm strength I assume most back country skiers have. The stars came out, and everything was peaceful until the rustling started. I’m still pretty sure it was my coat hood but…harsh headlamp light can make any woods look a little sinister as soon as you begin to imagine hungry bears. Realizing my thoughts were ridiculous, I tried to imagine the Berenstain Bears, and other cute forest animals. Even more ridiculous.

Beginning to feel exhausted, my pace slowed a lot, and upon some lightheadedness I stopped to eat the rest of my cookies. Continuing plodding, I suddenly heard a vaguely tribal, high-pitched cry. A headlamp appeared in the dark several meters up, and I yelled out a response with relief – another human! Nick practically blasted down the trail, bringing updates on the fast group, a flurry of advice and encouragement, and took my skis from my sore arms. About 200 vertical meters to go! With new energy, we continued up and I got some coaching on proper technique on skin-able sections. We discussed where the other group was – how far had they gotten by now? Is there a chance they had turned back? And was there a way to send them a message? I was really worried for Claire. Christoph appeared a little later, and soon I felt wind on my face. We were almost there! I saw the light of the hut in the distance, and the whole sky was revealed in minutes, the entire expanse of the milky way stretching out and sparkling as clear and crisp and as ever. I couldn’t stop looking up. We skied our way across the lake, feeling a little like runners on a treadmill…the hut wasn’t getting farther away was it?

Finally reaching the door, I unlocked my bindings in record time and practically inhaled the hot rice and sausage Katie had saved for me, neglecting my own packed dinner and stove. Intending only to warm up in my sleeping bag before going back down to socialize, I was shaken awake several hours later. Claire and Stuart had arrived! I was so relieved, I almost couldn’t believe it. But where were Spencer and Sandra? Feeling a little like an emotional mother, I hugged Claire as we prepared a bag and mat for her next to mine, before falling back to sleep shortly after.

The next time I woke up it was 4am, and I rolled over and lazily finger-waved at the sleeping bag next to me – the drowsy individual looked a little confused before I realized it wasn’t Claire…awkward. The now clearly bearded person smiled though, so all good. A few more hours were spent dosing until people began to rise and make breakfast. I stepped outside to collect water and the beauty of the day hit me – the sky was a perfectly endless blue and the detail of the snow, trees, and mountains were that of a National Geographic magazine. As a group readied to leave for some runs on cabin hill, Sandra, Claire, and I struggled to put on our frozen felted ski boots. Mitch joined us because his skins weren’t working well, and together we all formed the lead party and left the hut.

The trip down was one of skinning, falling, and walking, mostly with several repeats in that order. Sandra injured her knee in a face-first fall just after the lake, and took some Advil. Later in the meadow, Mitch had a particularly fabulous fall into a tree well and took a while to half pull, half crawl out with some team effort. After a few hours, we were met by the late group and crossed the log bridge to the road. It was beginning to get dark, and Claire’s feet were quietly killing her. My skins kept falling off, and a few kind people helped me scrape the ice off of them as we continued to cross the never-ending creeks. It was difficult to maintain a steady pace together, so I gave my headlamp to Claire and urged her to lead. We continued and I occasionally stopped to look at the stars, until a fast group behind us caught up and took Claire’s pack. Alone again, we made steady pace downhill, but now I was sure we were the sweeping group.

A headlamp appeared in the distance and Stuart was suddenly there, encouraging us to take off our skins and teaching us how to use our ski edges. In a stroke of genius, he pulled out his phone and turned on its flashlight, giving me his headlamp. Now we could all see! This made skiing at least 40% easier. Who would have thought.

Learning how to snowplow with a pack on was a whole adventure on it’s own. I was unconsciously leaning forward to try and balance better, but it only helped me pick up speed and make more impressive butt slides into the trees lining the trail. I got my face washed and smelled like Christmas, which was actually a nice change. After Stuart gave me more tips on distributing weight and making S curves, the snowplow got easier and Claire and I both fell less often. And then we hit the uphill section of the logging road. After learning to sidestep up, it was a short section of steep trail secretly sabotaged with rocks. My snowplow got more strained and jolting with every rock, but then Spencer showed up to check on us, and the trail leveled out. We were almost to the car, and the trees far ahead glowed faintly with their lights. The last few stretches to the parking lot were adrenaline filled, and we arrived to hear tales of sparks flying off of people’s skis, and news that Claire’s alcohol had been well-deservedly enjoyed by those that had helped carry her pack. Everyone was high on post-trip thrill, and happily chatted. We tried to convey our gratitude to everyone for helping us newbies survive, and were surprised to be met with such enthusiastic encouragement yet again. Goodbyes were said as people piled into the warm vehicles. Matteo expertly navigated on the snowy roads down, and somehow stayed awake enough to keep us all safe on the drive back, while Mitch ordered pizzas of an unintelligible price via phone (it was either $17.00 or $70.00, but somehow none of us really cared). Spencer, Sandra, Stuart, Nick, and our car group stuffed our faces at Boston Pizza in Squamish before splitting ways again. As we drove back into the city, I knew it was one of the most memorable (bordering on crazy) VOC trips I had been on yet – and I couldn’t wait for more.

~ A huge thank you to every single person on this the trip. Spencer, Stuart, Nick, Katie, Christoph, Matteo, Mitch, Tim, Jake, Claire, and Sandra; your advice, aid, and encouragement were immeasurable, and immensely appreciated. You guys are what made this trip possible for me, and I learned so much while feeling respect in the moments I felt it wasn’t deserved. I hope to see you on future excursions! In the meantime, happy adventuring. 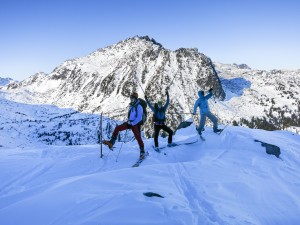 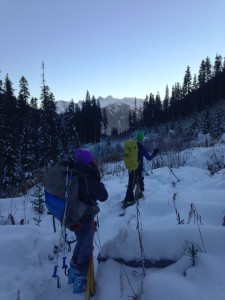 Claire and Mitch on the way down

9 Responses to The ‘Beginner’ Phelix VOCyssey