A week previously, after a long geographically enforced hiatus, I organised a beginner friendly ski trip to Zoa. 14 people came out encompassing most every stage in the broad progression that is “Beginner” for a VOC ski trip, as well as some more experienced heads looking for an easy day in the mountains. Fun was had by all (organiser very much included) and buoyed by this success I tried to think of somewhere to organise another such trip the following weekend. I settled on Mt. Rohr. It was somewhere new for me and descriptions made it sound a bit more challenging than Zoa but not too much.

In the end we were a group of 5. Natalie, Flo, and Alberto who had all joined me to Zoa as well as Lena for whom it would be her first backcountry ski trip (though she was already a very capable downhill skier). The combination of our small manageable group size, the relatively high skiing ability for a beginner friendly trip, and the apparently low difficulty level of the objective filled me with confidence which I happily shared with the others. There was even some discussion of going up and down Mt. Rohr in day one (instead of over two days as originally planned) and making a second trip in the area on Sunday…

We decided against the more ambitious plans and instead went for a relatively civilised Vancouver leaving time of half seven (7:30), and we started skinning up from the trailhead just after eleven. It was hot and there wasn’t a cloud in the sky. We wondered if spring had been cancelled this year, we instead have skipped straight to summer. Probably we would reach our proposed camp site in 2-3 hours and we’d ski a few laps before having a relaxed evening enjoying the more than 4 litres of wine we were collectively carrying (with Flo bearing the weight of 3 of those litres himself).

We followed the Wendy Thomson hut trail without incident looking out for a trail heading out into the trees to the right after about 2 km. We eventually came to a fork with a sign left for the hut and right for Mt. Rohr. Perfect! We headed up into the trees and it quickly became apparent that while we were not the first skiers to go this way it was not exactly a well-trodden highway either. The skinning became increasingly difficult in the crusty conditions between pretty tight trees and at some point the struggling seemed counterproductive. By this point we were following a general direction rather than anything that could be described as a trail. Had we been following the summer route? Was there a nice highway of a winter route somewhere nearby? After some half-hearted attempts and the odd false dawn trying to find the easy route we opted to bootpack straight up for 20 minutes until the gradient leveled out again. This undoubtedly saved us some time and swearing to the mountain gods and we stopped for lunch. 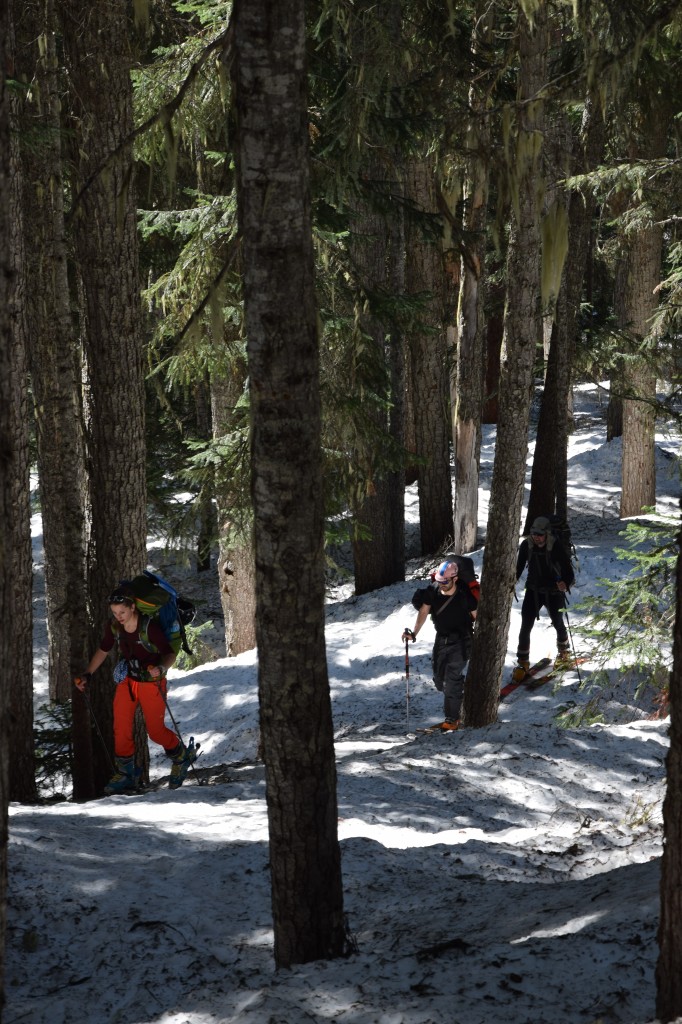 Skinning through the crusty trees before it really got interesting…

The gradient was leveling out markedly at this point so we figured we must be nearing the first lake. From there it should be only a short, trouble free jaunt to our camp spot and relaxing evening. Satisfied both with our efforts and progress we indulged in a long lunch break, maybe an hour?

Feeling refreshed we got going again and quickly found that we were traversing a little ways above a clearing, briefly thinking that must be Rohr Lake. Then realising it was a bit small, we were on the wrong side of it and it had some trees growing in it. Probably not the lake then… Must have a ways yet to go. I bet the highway of a winter route flows into that clearing, at least the way back down tomorrow should be easier… After crossing an avalanche chute one by one we came to a second steep and open slope which we had to ascend.

We started to ascend the slope one by one but somewhat lost our discipline for this approach after a while, in part due to encouragement from two descending snowshoers returning from the peak. The combination of the slopes steepness, its slushiness in the sun and crustiness in the shade of the trees made the going tough. This was especially true for Lena who was learning how to skin for the first time. This was not exactly Red Heather material! When she was approaching half way up the slope her skis slipped from under her and she slowly slid down the slope. And slid some more. And kept going. Her cries of “make it stop!” would later become a running gag for the trip but at the time we watched on powerless to help and wondering if she ever would stop. When she eventually did come to a halt it was three switchbacks lower than where she started. Despairingly looking back up at all the hard earned elevation lost she managed a wry chuckle at herself, I guess it beat the alternatives. It probably took about an hour but we all eventually made it up the slope, Lena’s baptism of fire being most keenly felt in her legs. 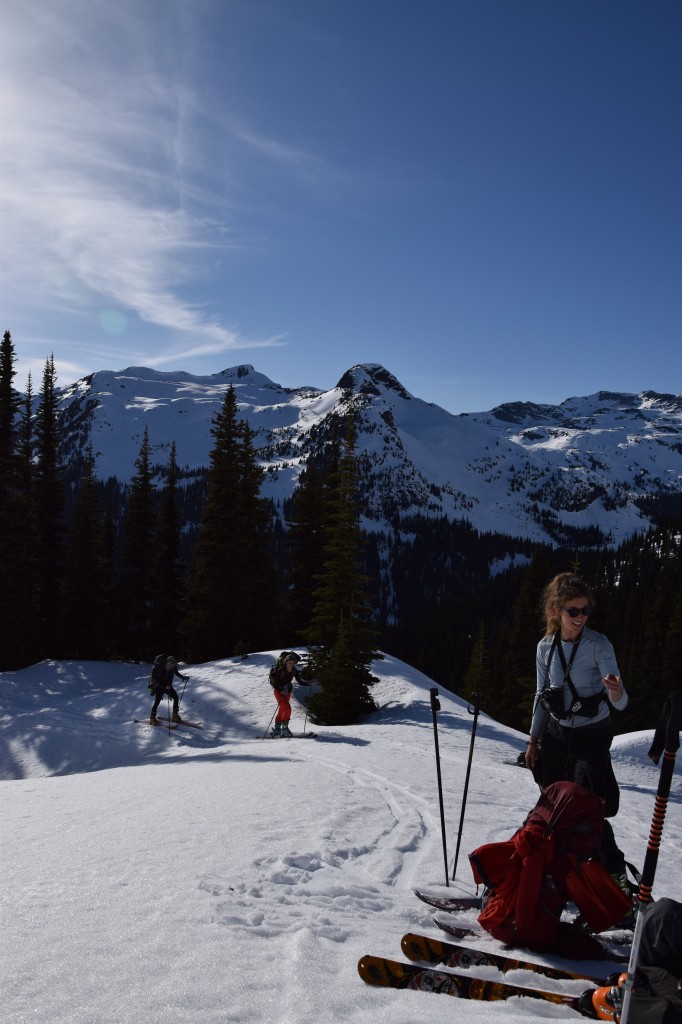 After another recuperating half-hour break we then finally enjoyed the promised easy, trouble free jaunt to our camp spot on top of a small bump just before the second lake. It was after 7 now and the sun was beginning to set. 2-3 hours, what a laugh! Clearly we hadn’t burned enough energy though because before we set camp we thought we should enjoy a short run down this hill that would become our new home in the twilight.

Camp set, kitchen dug (although Flo’s experimental roof come windshield abandoned. Us chemists do not make good engineers it seems) we started to make dinner under the stars. And what stars. And what a view! We certainly had an epic camp spot. We got through about 3 litres of the wine and had all the soup, noodles, dried veg (freshly picked from Natalie’s garden!) and chorizo we could manage. Clearly we are good company because it was after midnight before we realised it was getting chilly, and late, and that we should probably off to bed. 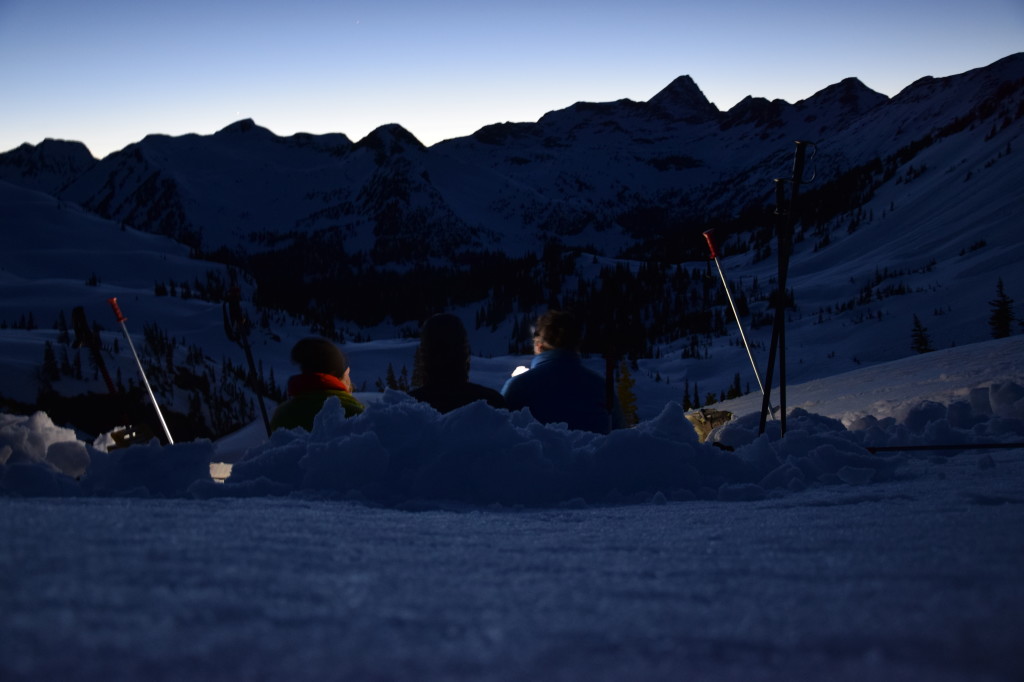 Getting dinner going in our kitchen with a view, Mt. Marriott in the distance

We rose at 7 (Alberto maybe 7:30…) and feasted on Alberto’s pre-mixed porridge mix. We had decided the night before that we didn’t want to set off too early so as to avoid skinning in the iciest conditions. From our camp we had a good view of Rohr and possible route options. We could see the obvious route taken by the snowshoers the previous day but, while this looked easily manageable and is presumably the standard ascension route, we ruled it out very quickly because it would involve traveling through a corridor encircled by huge cornices for probably at least an hour and a half. Instead we had chosen a route that would bypass the cornices between some rock/cliff bands although I was far from confident that when we got there we’d all want to skin above said cliffs in the hard crusty conditions. Still, can’t hurt to go look.

In the end we packed up camp, leaving all that we didn’t need with us in the kitchen, and set off around 9. We travelled no more than a couple hundred meters when it became obvious that a third route, up a gully to the left completely bypassed all cornices and offered easy access to a ridge on Rohr’s north side that could take us to the summit. 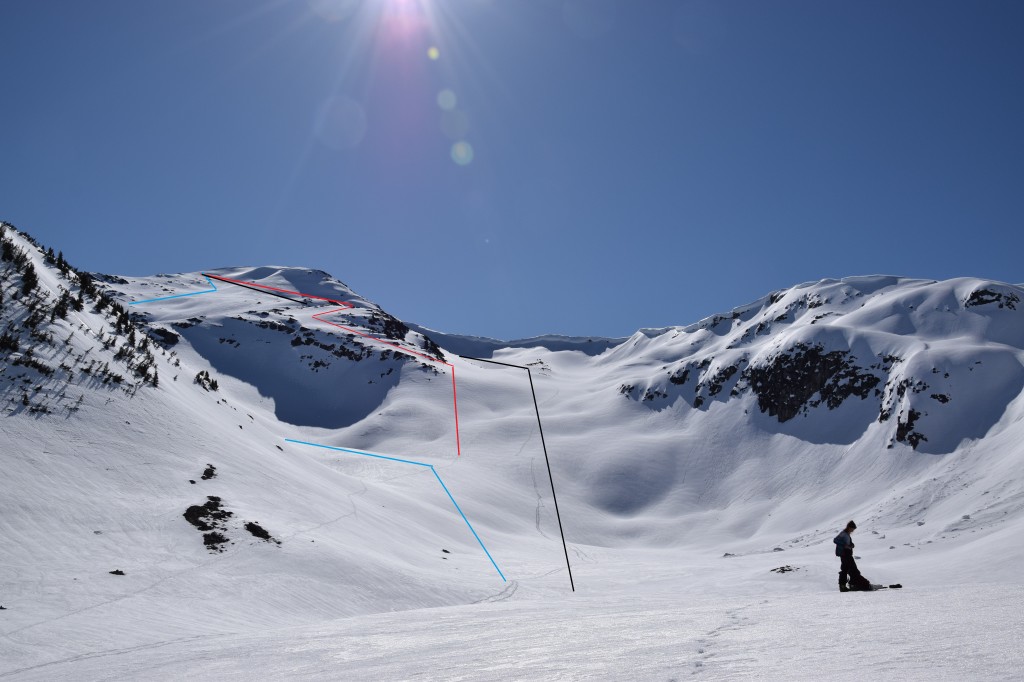 The conditions were still hard underfoot but we reached the ridge without trouble. The west side of the ridge felt exposed and was itself corniced in places but the ridge was suitably wide that we climbed it without much difficulty. From the top of the ridge the next step would have been to traverse further round Rohr’s north side before heading up a relatively mild slope into a higher bowl and onto the summit. In softer snow this would have felt rather trivial but the potential fall in these still hard packed conditions made the short traverse seem more daunting. In the end we collectively decided that the top of the ridge could be our summit for the day, we had fantastic views all around including Matier and Joffre poking out beyond Rohr ridge. We enjoyed the sun and had another long lunch.

Our summit and lunching spot. So close!

Skiing back down the ridge line was still rather jittery due to the hard snow but passed without incident. However, as soon as we turned east and skied down towards the lake we were treated to the most perfect of corn snow. A fantastic run down was had by all. At the bottom we all quickly decided that we should make the time for another run on this perfect snow. 20 minutes or so took us back to the ridge line and the second run was just as good as the first. Alberto and Flo continued along the ridge back to our lunch site to retrieve Alberto’s water bottle. Upon reaching our lunch spot, after some slight confusion, Alberto found his water bottle. In his backpack!

We all regrouped at our camp spot to repack our backpacks and were quickly upon the steep slope that caused us trouble on the way up. It really is pretty steep. Had I been told on my first ski trips that I needed to ski down it I would not have been amused. That being said, after side slipping the very top section we each managed to get in some legitimate turns on more nice snow, despite the heavy backpacks, and were soon at the bottom.

We crossed the short clearing and began looking for a nice obvious highway style route down through the trees. If such a thing exists it was beyond our wit to find it. Apart from one short steep step though our travel through the trees was fairly straight forward, tracking just to the right of the creek, a

nd we were soon upon the Wendy Thomson hut trail, considerably nearer the hut than where we had left it on the way up. I would recommend anyone wanting to reach Mt. Rohr in the winter to ignore the sign for Rohr, follow the hut trail until it flattens out and opens up, and then head up east through the trees.

We side slipped and survival skied our way along the trail and returned to the car for 6 o’clock, still in the glorious sunshine we had enjoyed all weekend. My sincerest thanks to everyone who came on this trip for the great company, valued input making decisions, and for displaying all the determination, self-deprecation and humour that I had warned that this trip might require. Thankfully, by the end no one was yelling “make it stop”! 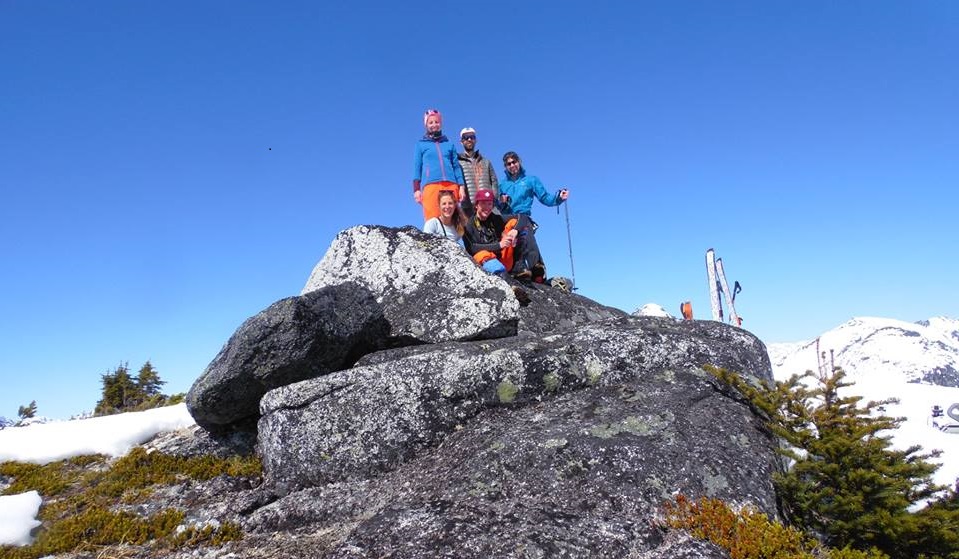 The gang, happy with our achievements.

As for Rohr, Lena has proven on her first ever backcountry ski trip that it is indeed somewhat “beginner friendly” but I’d say you need the right beginners. Earlier in the season with nicer snow this would be an absolutely perfect trip for a group of advanced beginners, the “inter-ginners”, those who have got the skiing bit sort of down but aren’t yet at the confidence and fluency levels of those “Intermediate friendly” folks. If you’re tough and can downhill ski you can make it work. If every successful ski turn still feels like an achievement then probably Rohr is not for you, YET!