I was unlucky enough to be one of 2.5 people awake in the Modo van on the drive back from Zoa, so I got tasked with writing the trip report…

Having decided relatively late in the season that I actually wanted to try to become a competent skier, I had one successful Red Heather trip and one largely unsuccessful Steep Creek trip to my name when Ross posted the beginner friendly trip to Zoa. Having been moderately encouraged and then thoroughly discouraged on my two previous trips (I’m ashamed to say that I selected ‘I don’t think it’s for me’ on Christian Veenstra’s telemark poll), I somehow decided to give skiing one more chance (or really, to give myself one more chance at skiing). 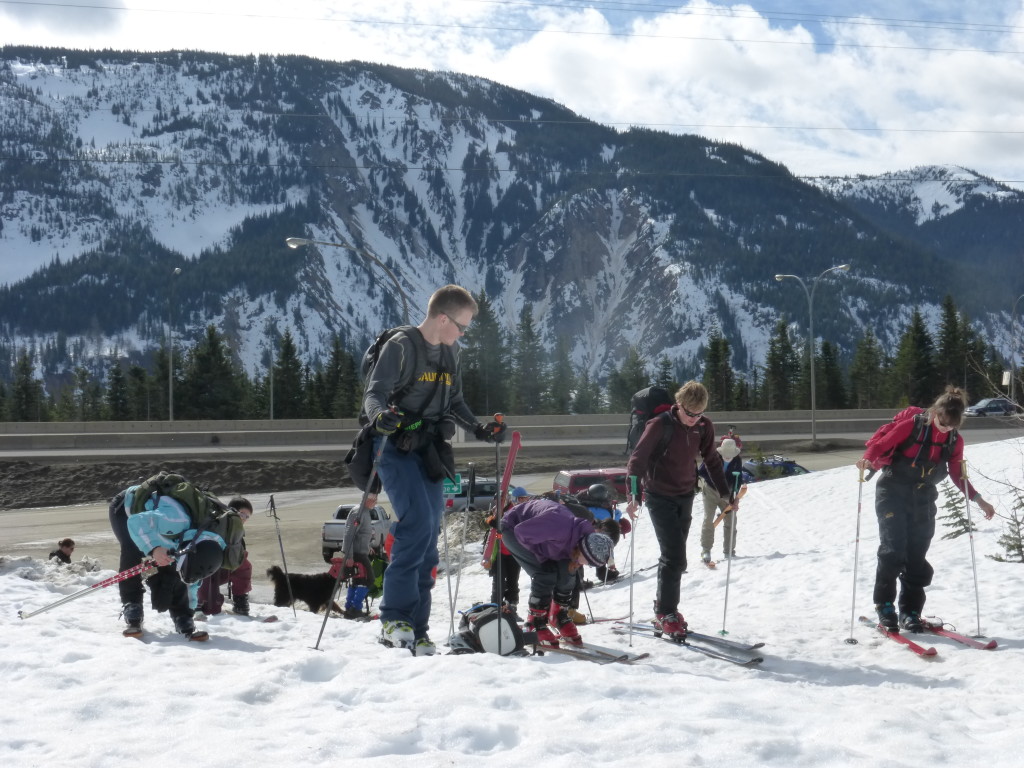 Skinning up from the road. Photo by Alberto Contreras.

Three cars made the trip up to the Coquihalla and although it was slightly chilly sitting around for morning faff, it was a beautiful sunny day pretty much the whole rest of the day. We were able to skin straight from the parking lot and moved steadily up along the logging road, stopping to make sure the group stuck together. We struggled up the steep open slope behind some snowshoers, with enough time for reflection for me to question how on earth I was going to do that in reverse (I learned later – by side stepping for a solid 15 minutes). 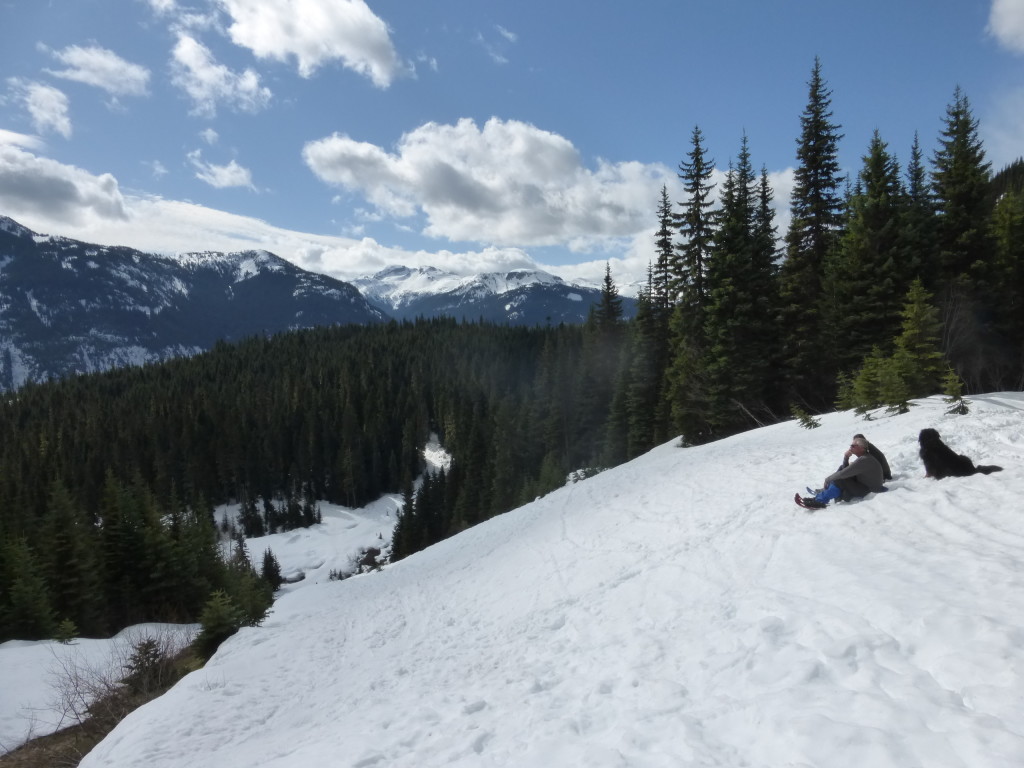 I still struggle to comprehend how I made it down. Photo by Alberto Contreras.

Soon we turned left into the trees following a couple of non-VOC skiers just ahead of us, who advised us not to follow the trail markers but to keep going a bit longer on the logging road before making the turn – it turned out to be a pretty good route, not overly steep through the trees. 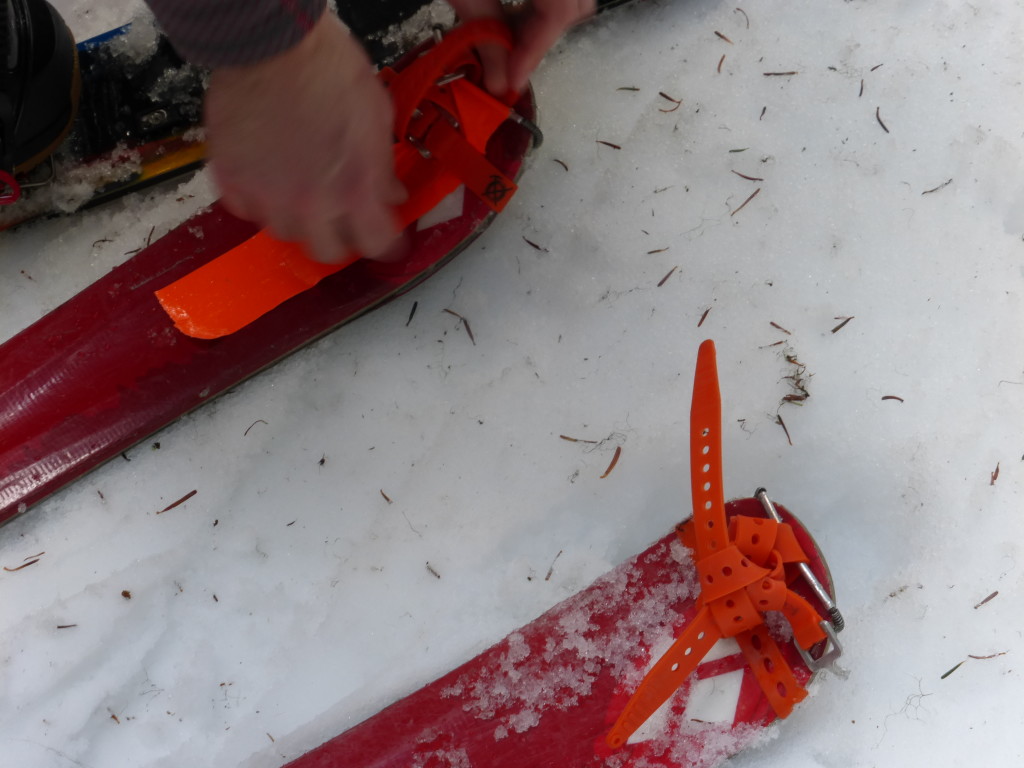 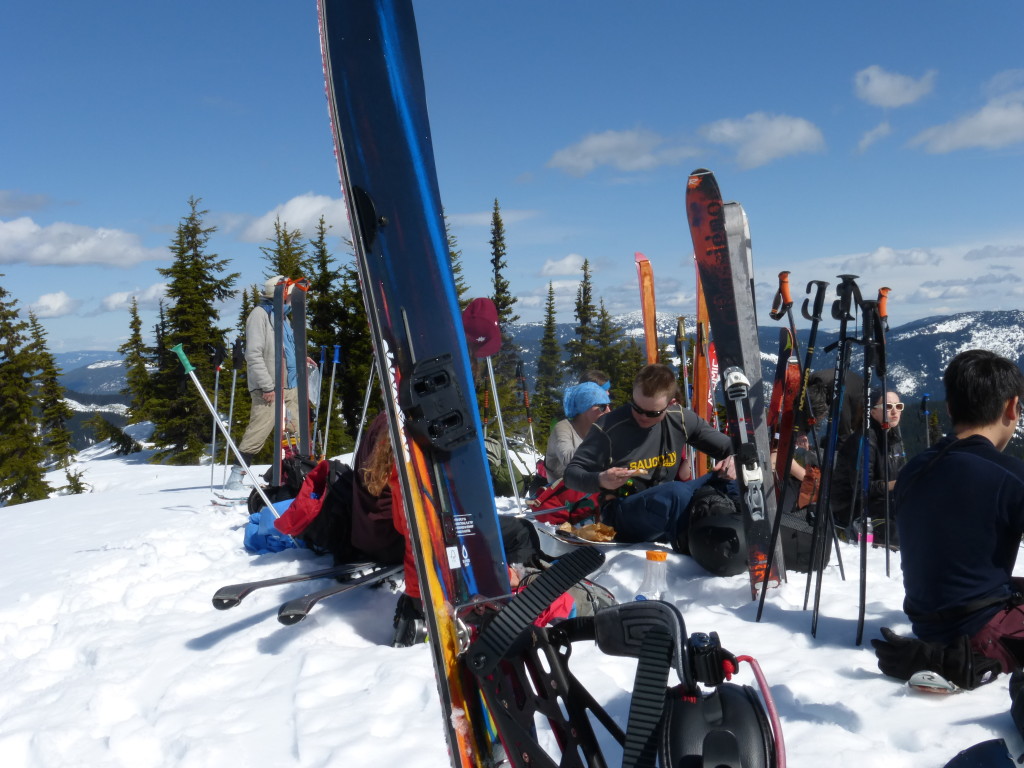 Lunch with a view. Photo by Alberto Contreras.

Out of the trees we debated where we should stop to have lunch, pushing a bit further on to get the good views. After lunch, we stopped on the false summit to discuss options. Most of the group decided to head up to bag Zoa Peak while a few of us decided to try and get some practice runs in on the ‘mellow’ slopes (which didn’t feel that mellow to me!). And Roland decided that he would rather sit around at the cars where he could chat with passing truck drivers, so he headed down in an advance party of one. 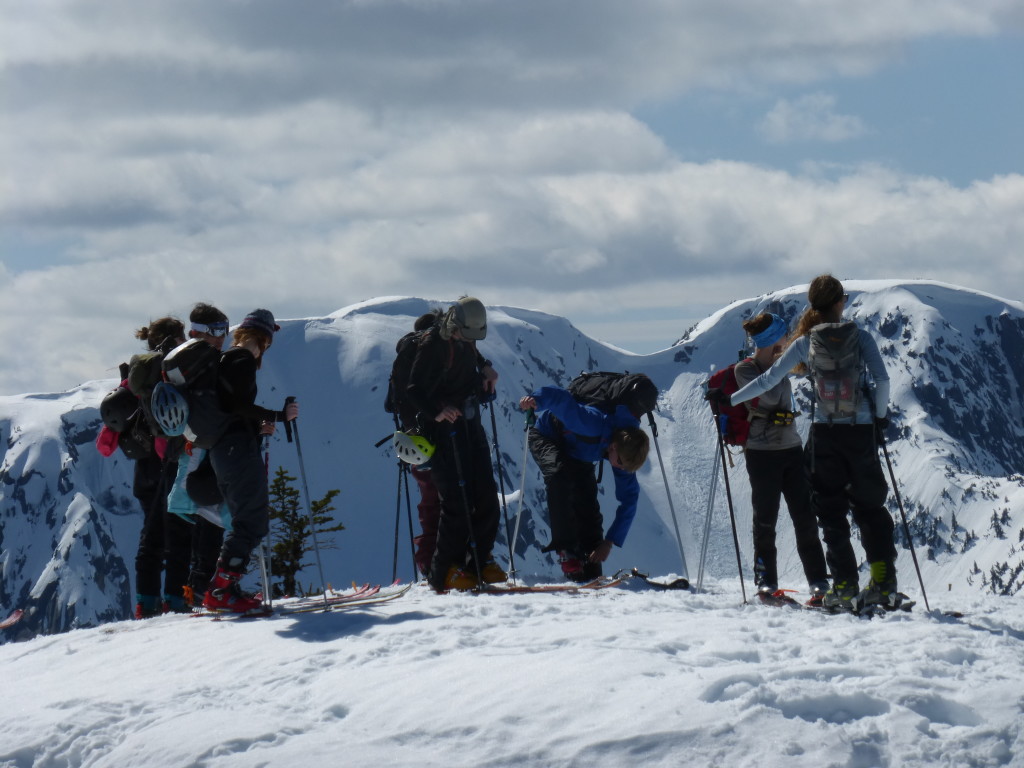 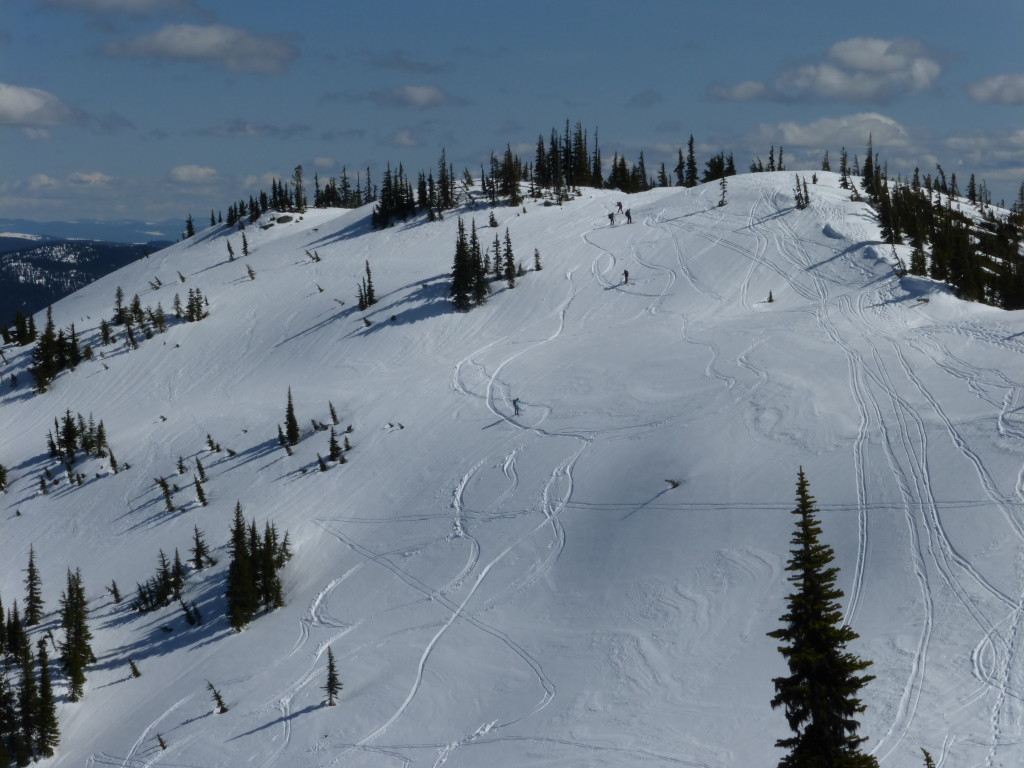 At first, I was pretty much too terrified to do anything other than traverse at the shallowest angle that was physically possible and then come to a dead stop rather than turn. Ross taught me the kick turn and then the worm turn (which is basically where you transform the fact that you have fallen over into an opportunity to change directions), and generally was patient with me while also encouraging me to at least TRY to turn. Eventually I did try, falling the first time, and then I tried again and actually managed it! I was gaining confidence but at a very slow rate, with plenty of falling and probably some squealing. Meanwhile Xiaojiao was shocking us all by doing perfect tele turns after only 4 days practicing on tele at Whistler. 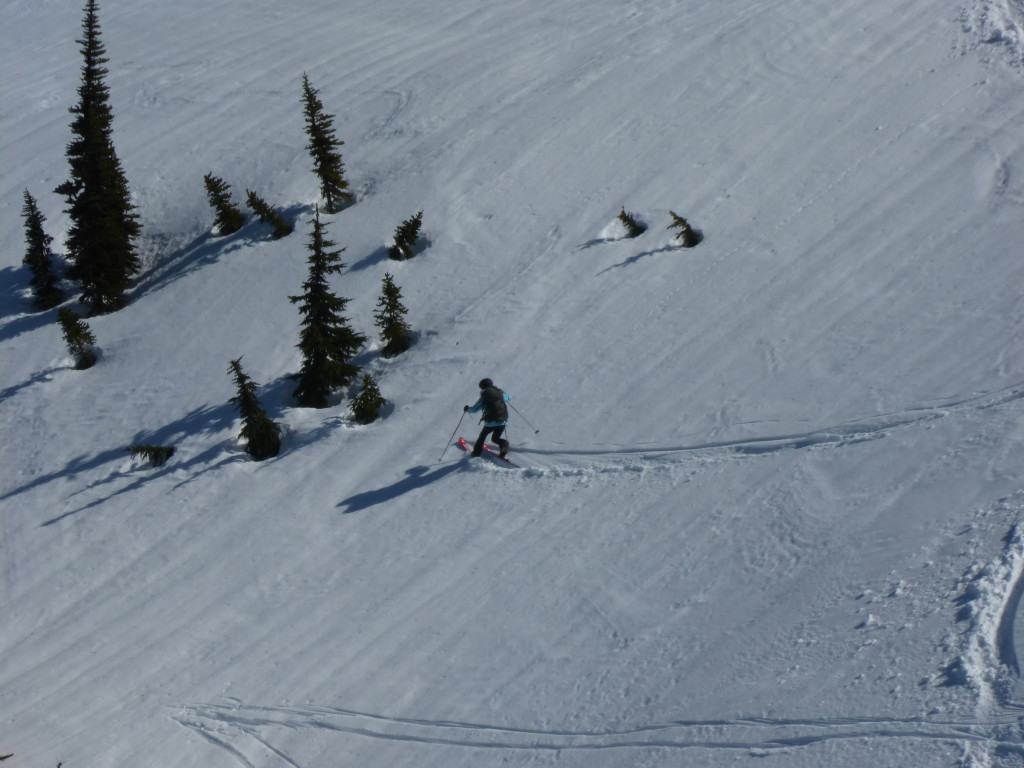 Eventually the summiters came back to report that there were no views from the true summit, and we all skinned back to the false summit where we headed off in pairs with instructions to wait for the pair behind us to catch up at various intervals before heading off again. On this run down from the false summit I finally started to feel some confidence (it helped that it was a truly mellow gradient most of the way) and basically enjoyed myself nonstop all the way back to the cars. I didn’t once feel terrified on the way back down – which to me, is a big accomplishment. Sure, I put my skins on through one section of trees and did a lot of side stepping, and sure I spent 15 minutes side stepping without skins down the final steep slope to reach the logging road, but these were short segments of time interspersed in a truly fun, very beginner friendly, descent. 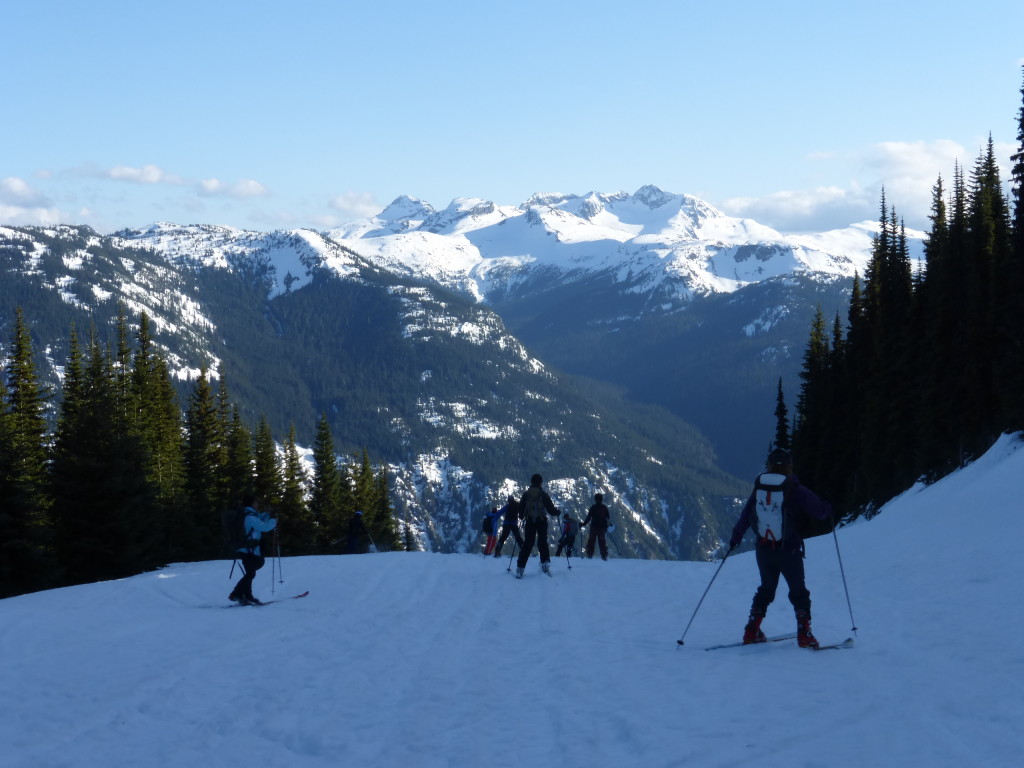 Time to ski back to the cars. Photo by Alberto Contreras.

I was pretty wrapped up in my own challenges to notice anything else that was happening, but it seemed to me that everyone else was having a good time to too, challenged in their own ways to greater or lesser extents. The route to Zoa is such a fun and interesting one that I think it is really suited to a wide range of beginner-identified people.

A rewarding stop for dinner in Hope, and we still had a whole day left of our weekend!