July 30th: 5 A.M. Saturday morning. Beep beep beep beep beep. Rise and shine. Early mornings have never been my sort of thing, but the alarm clock doesn’t seem as daunting whenever action and adventure is on the weekend agenda. I throw on my roots sweatpants and Ten Tree hoodie for maximum comfort for the four hour drive to Birkenhead Provincial Park. I run through my personal checklist of backpacking essentials one last time; water bottles filled, sandwiches taken out of the fridge, camera batteries ziplocked and stuffed in my bag. 5:45 A.M., I throw my gear in the back of the Wilsonmobile (Honda CRV), and take off from Steveston to pick up Paula, Erica and Brian.

As I’m leaving Richmond the sun begins to rise, and a mild fog is swirling beneath the Arthur Laing bridge amidst an otherwise cloudless sky. Saturday morning wake-up song choice: Sunny and 75 by Joe Nichols. By 6:30 A.M. I’ve collected the crew, and we’re gearing towards the Second Narrows bridge to begin the long haul down the Sea to Sky highway. With minimum traffic obstructions and a bit of luck with avoiding a lone police speed trap, we make it through to Squamish for a Tim Hortons pitstop seemingly way ahead of schedule. Iced caps, fruit explosion muffins… back on the road. We stop for gas briefly in Pemberton at 9:30 A.M., then carry on for the final leg of the drive.

With this being a first-time visit to Brian Waddington hut for everyone in my carpool, none of us knew exactly where the meet-up spot was, and our cell service had cut off by this point. We all remembered that the crucial turnoff point was Birkenhead Lake Provincial Park, so off we went down the dusty forest trail for 13 kilometres. With moments of uncertainty as we pass numerous turnoff points along the road, we continued along until we hit the fork in the road at the gates of Birkenhead Lake Provincial Park and see Devon walking down the road towards us from the right. We park some 100 metres up from the park gate off to the side of the road, just below the two other VOC vehicles. 10 minutes ahead of schedule with a directions crisis avoided, we unpack our gear from the CRV, which is quickly cooking up underneath the unobstructed sun. Given the forecast that I had read which provided a low chance of precipitation, I decided to take my chances and leave my rain jacket behind… Unfortunate decision Eric. After we batter on the SPF 30, extend our hiking poles and strap up our backpacks, we head on up to meet the rest of the VOC crew.

The trek to Brian Waddington hut begins with 6.6 kilometres of rocky and bumpy logging road, filled with dried up riverbeds and washed out sections along the way. Since none of us brought a 4wd-equipped vehicle, and that we were not blessed with a bypassing pickup truck, we were on foot the entire way. Almost immediately we were ambushed by hordes of black flies, which had apparently developed an immunity to our bug repellent. Swatting and trekking our way up the logging road in the relentless heat, we eventually passed through into thicker vegetation, which offered some protection and postponed my inevitable farmer’s tan/sunburn for a few more hours.

Given that Birkenhead Lake Provincial Park and the surrounding area is Grizzly bear country, Brian boldly sacrificed himself as bait when we came across a hungry mother bear and her cubs. Just kidding, we didn’t run into any of our furry friends along the way, but the trail was scattered with droppings every few hundred metres so we were constantly on the look out. After crossing the first roughed-up bridge, we chatted with a man who was car camping with his dog on the side of the road, which was the only other company we had encountered thus far. A few more kilometres up the road and we reached the first flowing riverbank; a perfect place to stop for lunch, aside from the flies eating half of it. 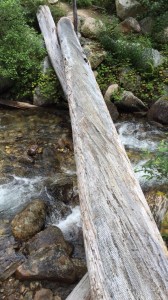 After taking the fun route over the riverbank, we continued along for a short-while longer until eventually reaching the trailhead. Several trucks were parked here when we arrived, so we knew we wouldn’t be alone up at the hut. Following along fields of thick grass, across boulder fields and overtop of mountainous streams, we took several short breaks to allow people to catch up and others to catch their breath. Alex and several others stopped briefly to test their bouldering skills on some of the large rocks that we passed along the way. We soon waved an unremorseful goodbye to the black flies and were quickly greeted by the much peskier mosquitos, who would accompany us the remainder of the trip. Getting tired of hauling our gear and from our war with the bugs, we eventually arrived to a clearing in the woods under the view of Mount Shadowfax; the cabin was not far from here. 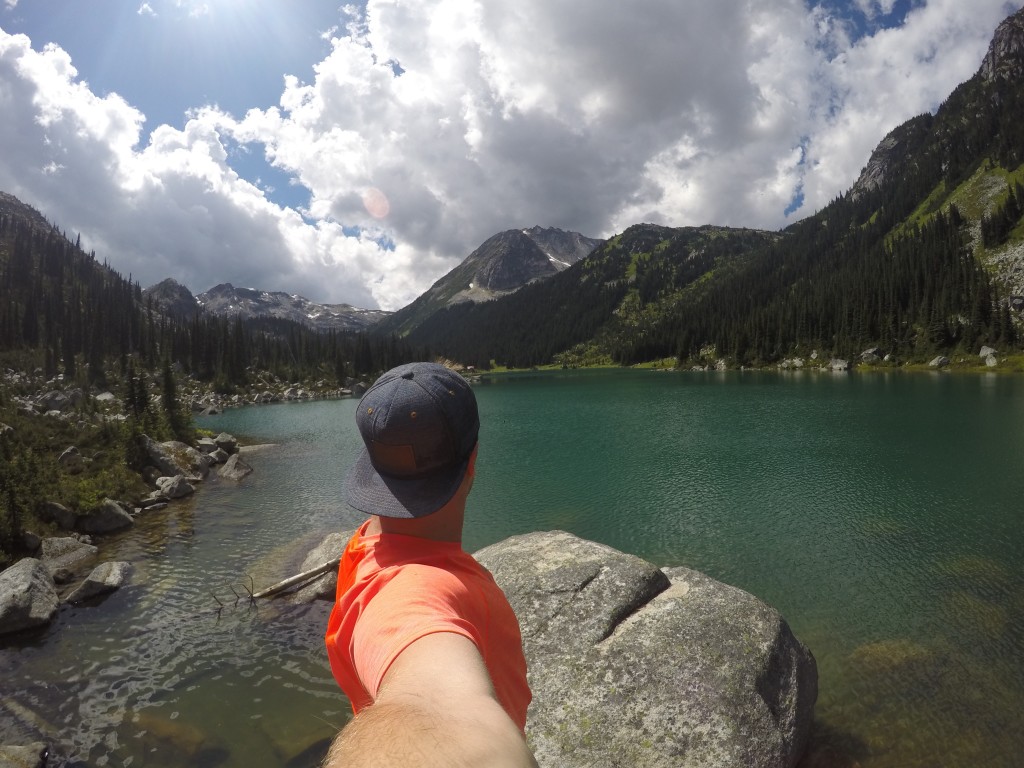 Upon arriving at the lake, we were all as quick to jump in as we were to get out. Brrrrrrr it was cold. But what a spectacle Long Lake is: a massive bowl of turquoise glacier-fed water in the vicinity of tall rocky peaks. The cabin was now in view across the lake, so we waited briefly for the rest of the crew to unite before finishing the distance. 15 minutes longer around the edge of the lake and finally, the cabin was upon us. Occupied only by several other small groups (including some tents outside), there was plenty of space on the upper level for us to fit. On a scale of 10, the comfort of unloading my massive Gregory pack and swapping it with my daypack was at least an 8.5. After a much-deserved rest break and another few bites to eat, the group was off again on a short hike up to an unnamed peak (maybe Peregrine?) out in mosquito territory, southeast of the cabin. 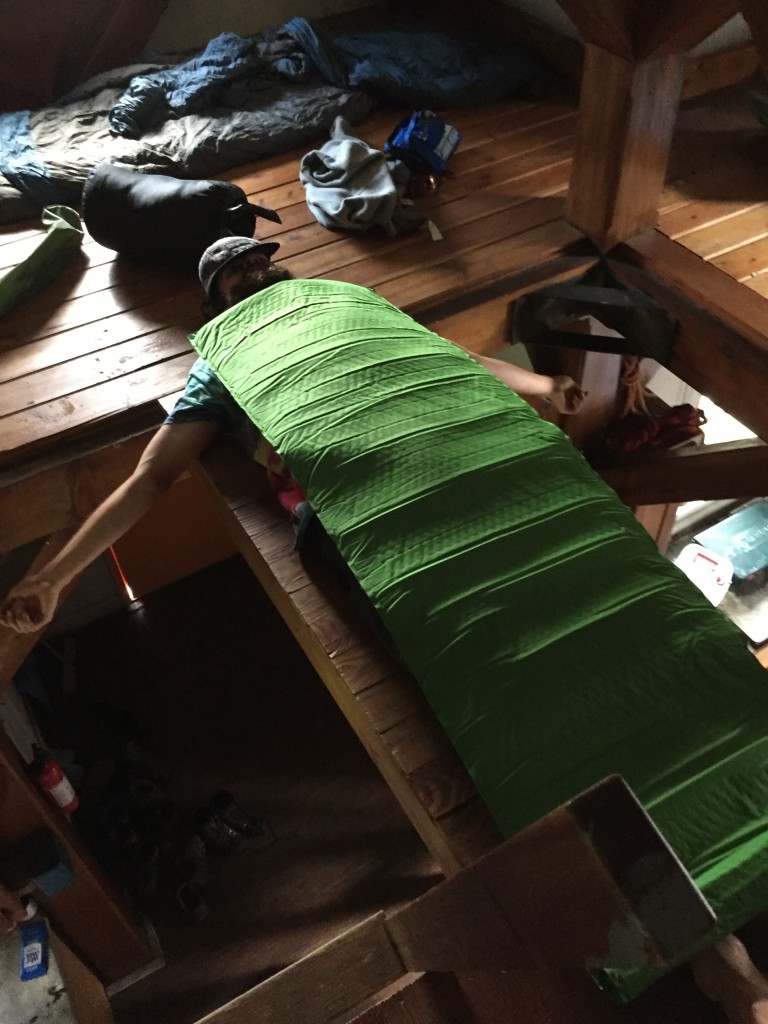 Unfortunately I was several minutes behind in keeping up with the group, so from what I heard the rest of the group had stuck closer to the lake, passed over more mountain streams and headed up through the woods and into a boulder field to get to the top of Mount Maybe Peregrine. I, on the other hand, made my way immediately south of the cabin and went up through the larger boulder field in an attempt to get to the col so that I could walk across and meet up with the rest of the group. I almost made it, except that as I was trying to find a route to avoid some risky granite faces that would’ve made for a painful bum slide, Zeus and his friends started making a racket over in the angry-looking clouds in the distance. Carrying metal hiking poles and watching the wind carry the storm in towards me, I wasn’t too eager about becoming a human lightning rod, so I trekked down through a narrow cut in the mountain to rejoin the others who were heading back down to the cabin. 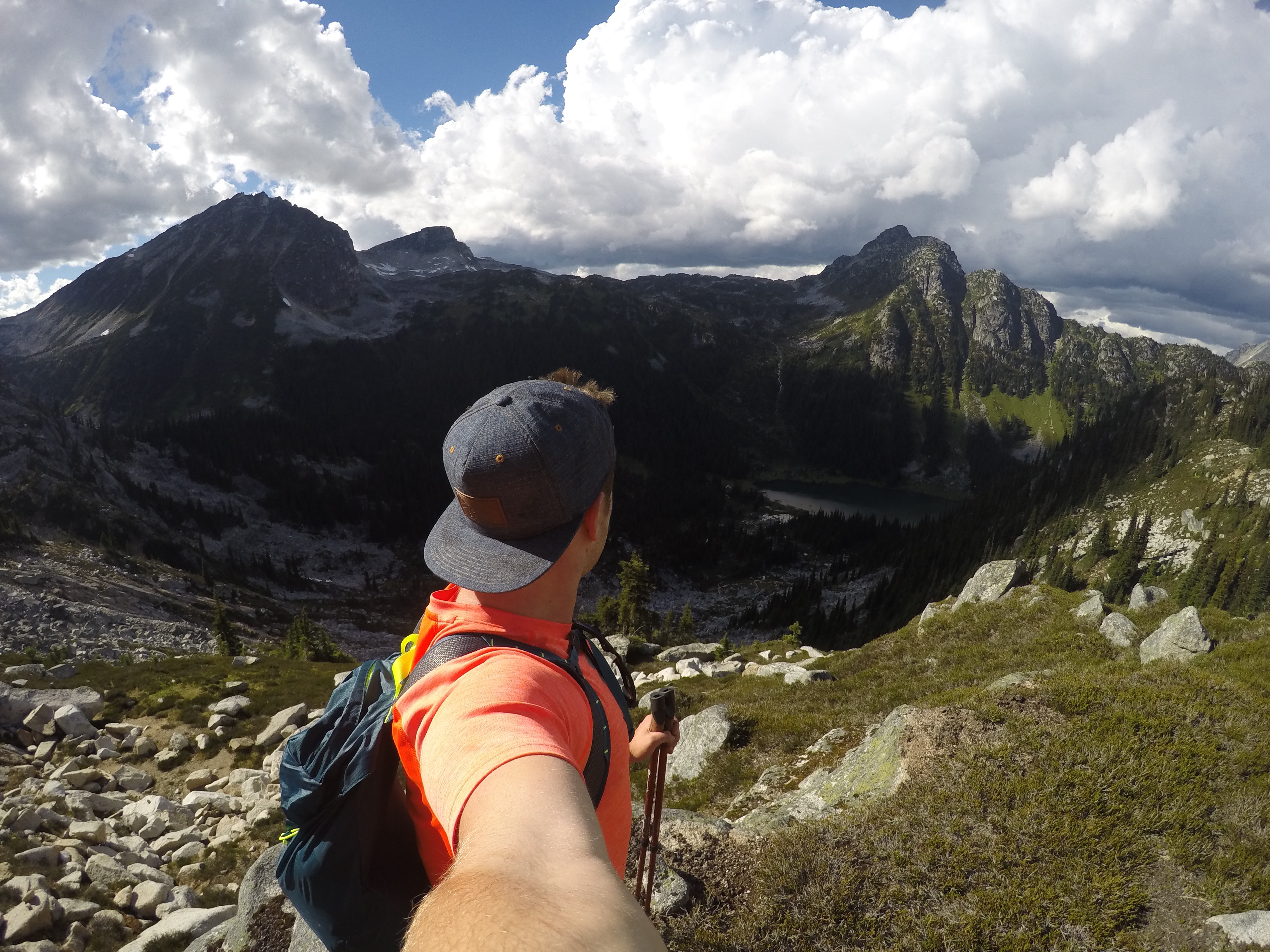 At this point it was naptime for some of the warped hikers, while dinner was on the minds of others. Armed with a MSR stove and dehydrated mashed potatoes with roast beef, I boiled up some glacier melt and waited a painful 15 minutes for my food to rehydrate. By now another group had started a small campfire by the lake, and they opened the invitation to our group to come and joined them. As we sat around the campfire, sang songs to a guitar and threw back some Alberta Premium, everything seemed alright in the world. We also discovered that swimming goggles work as excellent smoke deflectors, as Brian found out before knighting himself as the Tolkien range fire wizard. 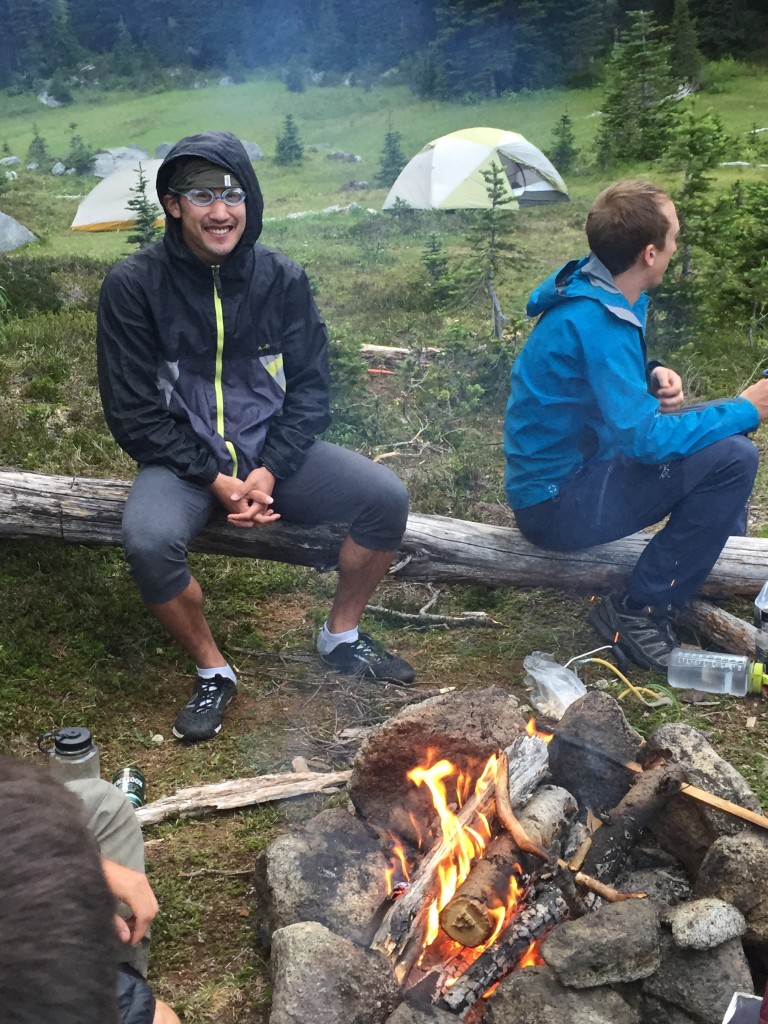 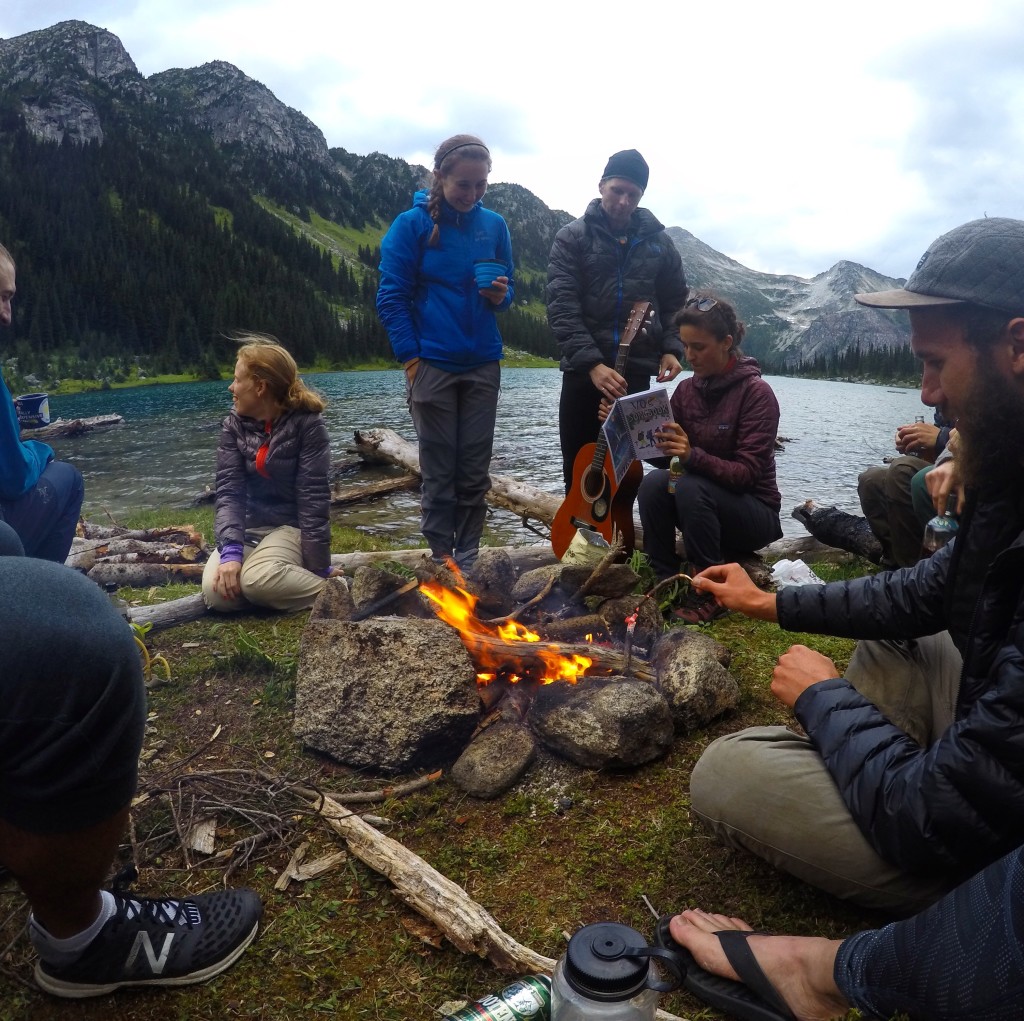 As the wood burned and the embers flared, raindrops began pattering down (always bring a rain jacket folks). Eventually we had no choice but to move the party indoors, so back into the cabin we went. With the two tables adjoined, we told stories, heated up some whisky, munched snacks and shared some laughs, sheltered from the unpredicted elements outside the walls. The night grew old and our eyelids became heavy; slowly but surely everyone climbed up the ladders and made their way into their sleeping bags, alarms prepped for a 9 A.M. departure for another day of hiking. 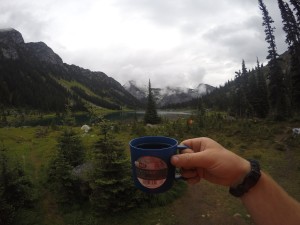 Morning brew with a view, by Eric Wilson

Out of range of a Tim Hortons, I started my morning with a fresh cup of wilderness coffee, accompanied by some oatmeal and trail mix. Oatmeal seemed to be the popular go-to amongst the group, but the breakfast of champions came in the form of wilderness pancakes, made by Alex. Properly fed and well rested, we packed our day bags as we prepared for the trek up to see the White Wizard himself. The hike to Gandalf peak began with a fun trip through the marshy woods to the east of the cabin. What wasn’t fun about it was stepping in shin-deep mud within minutes of the hike that left my boot caked in mud. You win some, you lose some. 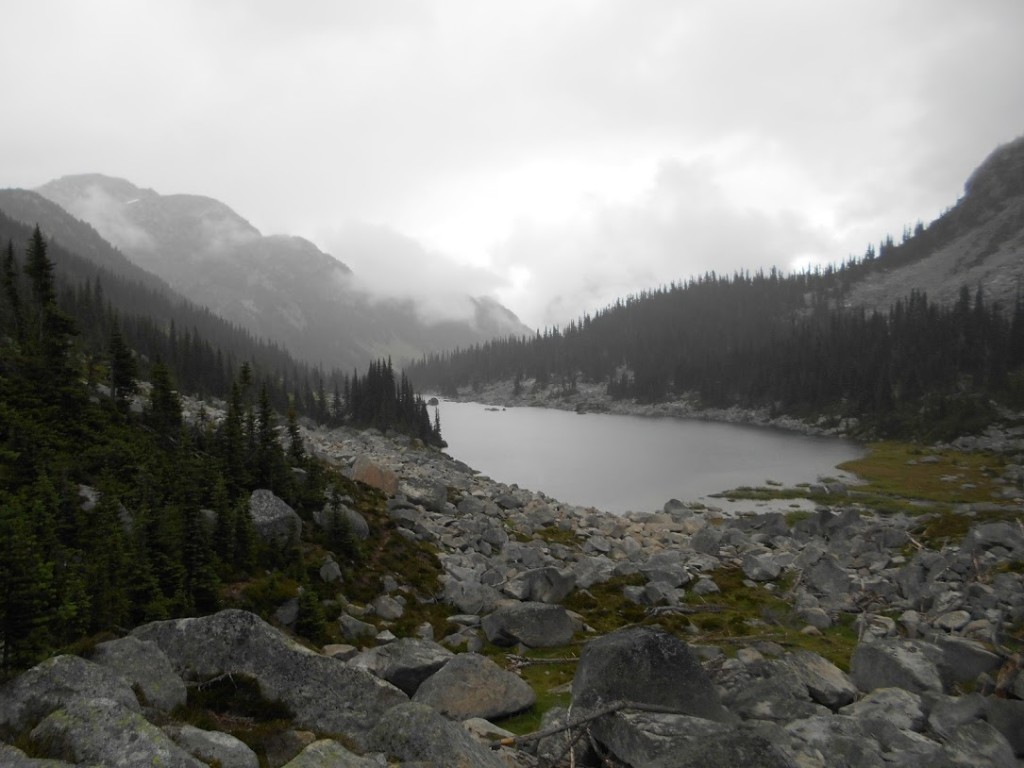 Looking out from Aragorn glacier, by Magda Bojarska

The rain made its return as we powered through to Aragorn Glacier. While passing through another boulder field, we were lucky to catch the glimpse of several marmots as they scurried across the wet rocks. As we climbed towards the col between the Gandalf and Aragorn, the clouds whisked through the valley and pockets of sunshine managed to peak through the overcast skies. We paused for lunch at the col, which is where the group made the decision to split up and have one group go to Gandalf and the other go along the Aragorn ridge.

Looking out from the eastern col of Gandalf, by Eric Wilson

I stuck with Devon’s group and begun the climb up past the clouds. Travelling over loose dirt, large boulders and eventually ice, we made haste up the mountain until we were just below the top. Edging our way around the mountain looking for a better way up, we had to call it quits within eyesight of the summit due to a reduction in visibility and hazardous sheets of slippery, exposed granite. Without any eagles to fly us home, we begun a careful descent back down the south side of Gandalf and over to the col. 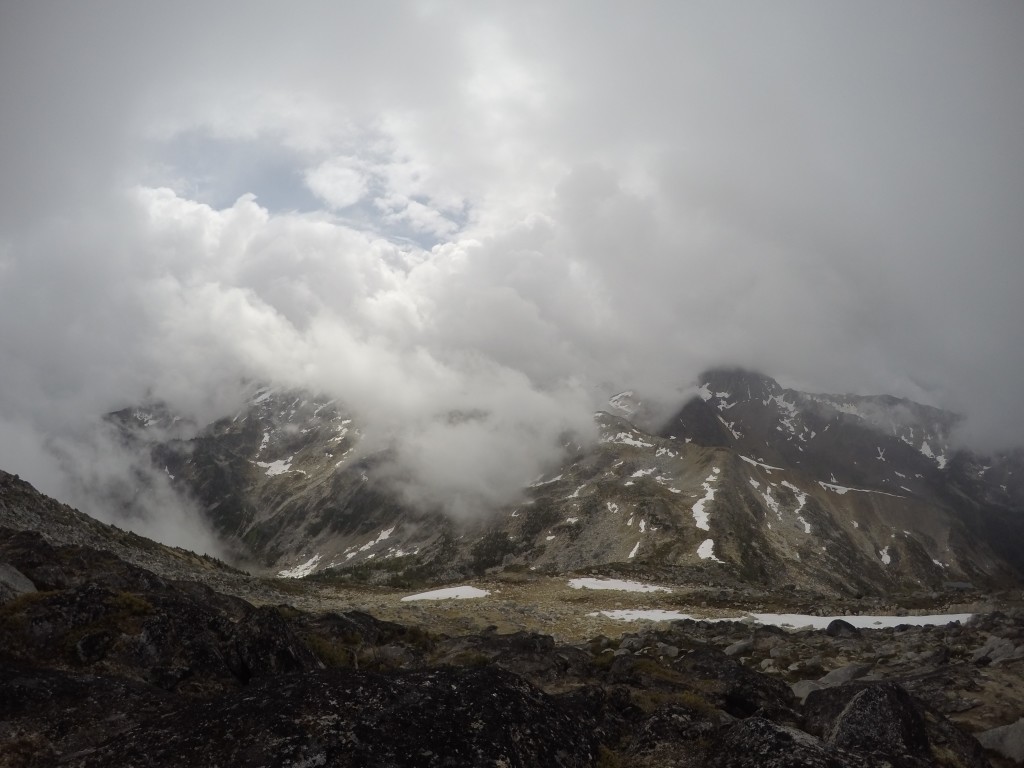 The trip down the col provided us with more stunning views of the Tolkien range; the shimmering lakes, the elegant green meadows, and the sharp jagged peaks. Having only heard of the Tolkien range area merely a week prior, I was already so eager to recommend this location to friends and family. As we continued to the hut, a baby marmot and its mother briefly accompanied us on our journey before tucking themselves away underneath the rocks. Taking gentle steps through the slippery marsh as not to make a mess of ourselves for the car rides, we made it back to the hut in the mid afternoon with plenty of daylight to spare. 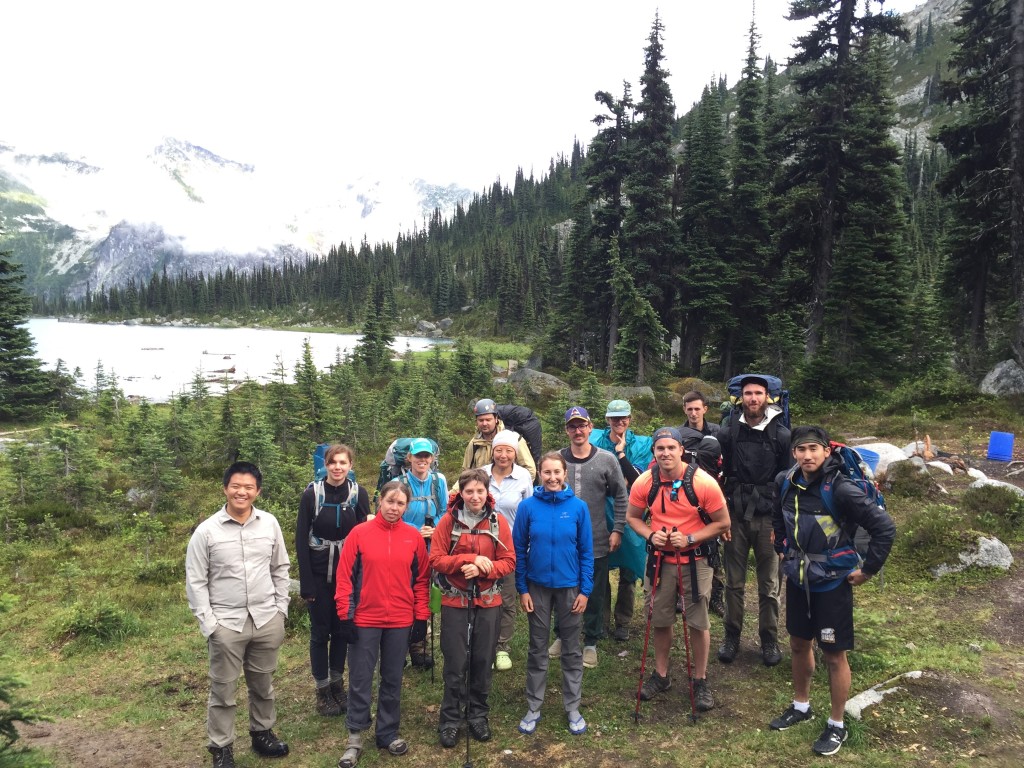 A quick bowl of ramen noodles, a group photo in front of the hut… time to go. The Sunday departurers said their goodbyes to Devon’s carpool, and set foot around the lake towards the trailhead. Having taken a little over three hours to hike to the hut on Saturday, we managed to shave off over an hour on the descent despite muddy conditions, muscle soreness and a torrential downpour. My remaining fears of a flat tire or a break-in were quickly extinguished; the CRV had survived the night. My carload said our final farewells to the rest of the VOCers, packed up our gear, and began the long haul back home to a hot shower and a warm bed.