Disclaimer: Soloing is dangerous. Stay well within your ability level, always tell someone where you’re going, have a back up plan.      Or just don’t do it.

I had just finished my last exam and was finally care-free for the first time in a long time; needed to get out into the mountains ASAP, after a long hiatus from alpine pursuits. I failed to recruit anyone at such short notice, so decided to just go for it and bag a peak on my own – Sky Pilot had been on the to-do list for a long time. This trip coincided with a two week long window of clear blue skies, and the avi risk had been low-low-low for the last 9 days or so, so it was basically Spring up there. Because of this, I felt alright sending it on up there solo.

Being a frugal, car-less student, I didn’t want to pay $40 for the gondola and had no means of driving to the top of the logging rd; self-propelled it is. I requested a ride to Squamish off of Pop rideshare at 9pm on the 13th and specified to the driver that I’d have my mountain bike, skis, a day pack, and an overnight pack. This was met with some surprise, but he assured me we could rebuild his Van to make it work. I was pleasantly surprised upon meeting Marc that he was a dirtbag van dweller. We got along well. I got dropped off 1km down Mamquam at around 11pm and threw my sleeping mat down next to a boulder in the woods to sleep under the stars; there was a meteor shower that night, which was a welcomed coincidence.

I got up for a 5:30am start, stashed my overnight gear in the bushes, strapped my skis to my bike, and made a start up the 8.5km of remaining logging road. I started at an elevation of around 50m, and it took just under 2 hours to complete the next ~700m to reach the gate. Just as I arrived at the gate to stash my bike, another vehicle pulled up; I would bump into Brett and Drew a few times throughout the day. The approach via the Sky Pilot Valley Trail was a shitshow; two weeks worth of freeze-thaw and people scraping off any residual snow from it left an icy ascent with an abundance of stream crossings and alder-dodging. 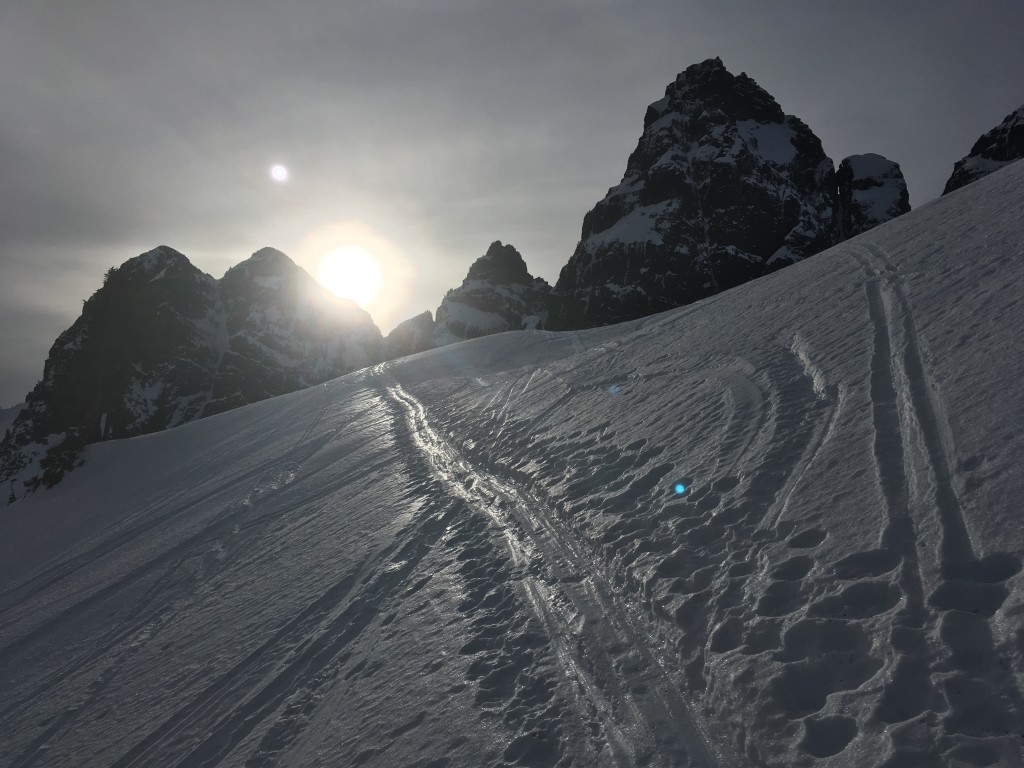 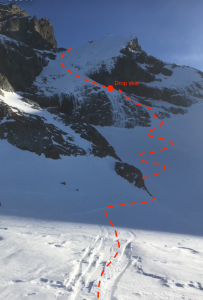 Once off trail, much of the steep snow ascending warranted crampons and boot packing, which was probably quicker than endless switchbacks anyway. I took an inefficient, but scenic approach to Sky Pilot itself, swinging around the NE side to check out Gunsight Gap because it sounded cool, then gaining the North ridge and traversing the upper portion of the Stadium Glacier. I figured soloing the Pink Slab could get a little spicy, so I opted to boot up a 45° slope avec tools and crampons over a cliff instead. Much safer. After a tiring boot up the snowbank I finally gained the West ridge around 1pm and was able to traverse around to the SE face for the final push. Here I met up once again with the other group, Drew and Brett, who were roped up climbing the final portion of the ascent. I didn’t rope up since I didn’t have any protection with me. Or a harness. Or a rope. Or a partner. In light of this I was able to save some time and climb on past them to reach the summit by about 1:30pm. The view from Sky Pilot is spectacular; being the highest peak in the immediate area, it offers excellent views of the Howe Sound, and the impressive peaks further to the North. Camp-to-Peak time was almost exactly 8 hours, which I was quite pleased with for ~15km and 2000m elevation gain; it helps when the only faff you have to deal with is your own.

I hung out on the summit with Drew and Brett until around 2pm, before beginning my descent. I had been a bit paranoid about descending the icy 45° slope over the cliff, but fortunately it softened up enough since I was there last to allow for prime plunge stepping. I retrieved my skis from underneath the big scary icicles I had cleverly stashed them beneath, and began a fun descent over the Stadium Glacier. My internal compass led me astray and I ended up in the wrong gully, which resulted in a few unplanned creek crossings, some thigh deep post-holing, and abundant muttering swear words to myself. 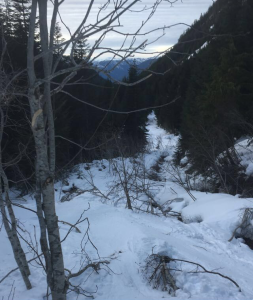 Finally back on the Sky Pilot Valley Train, I had an icy, alder-filled ski out to look forward to (pictured right). It was great. I was a bit tried for time, as I had to meet my ride back to Van at 5:15 at the Apron parking lot. So I hustled down the trail and bombed down the logging rd on my bike as fast as possible , only stopping a couple times to admire the jaw-dropping sunset over the Howe Sound, and the colours it cast onto Atwell. I got back to the parking lot at 5pm after retrieving my sleeping bag stashed in the bushes, making for an 11.5hr day, covering about 30km.

All in all, the trip went amazingly well given how last minute it was thrown together, and I’m glad the conditions were favourable to allow me to successfully put an end to the stressful, exam-ridden existence I had been subjected to for the previous few weeks.