As a first-year, new member of the VOC, and novice to winter hiking I wasn’t really sure what to expect when I first signed up for this trip. However, after hiking, sledding, eating, and partying with my fellow VOCers turned friends I am happy to say that this trip will definitely go down as a highlight of 2020 for me, and I look forward to many other adventures with the VOC. 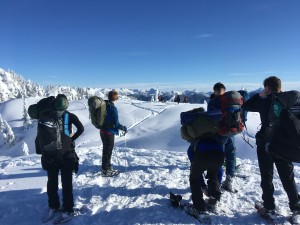 Enjoying the views during the hike up into the backcountry

We started our adventure Saturday morning, everybody meeting each other, most for the first time, at the base of the Seymour ski resort. The sun was up, the sky was clear, and stoke levels were at a maximum. We put on our snowshoes or skins, split the generous 4 liters of wine Diego brought between our packs, and got walking. Once we got going, it got warm quick, the movement and bright sun kept us warm so that you only really needed a base layer at this point. After a short hike through the backcountry, we arrived at a site that seemed to suit our needs for snow caves. With minimal avalanche danger and a good view, we set our packs down and got to work on the caves.

With only two people in our group having snow cave experience, it was easy to over-imagine what could become. Although with dreams of multi-room snow hotels with separate rooms and space to hang out, we quickly learned that digging through the snow was no easy task (who would’ve thought), it was challenging and time-consuming enough just to make a small hole for three people. 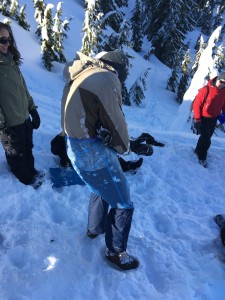 James preparing to go “diaper style” down the sledding hill.

After finishing our snow caves, we had some time to explore and have some fun before the sun went down. With this time we were quickly introduced to my new favorite way of navigating the backcountry, sledding. Right next to our campsite there was a steep hill with a section of the trail that was perfect for sliding down. We grabbed whatever we could find whether mats, trash bags, or just our snow pants, and gave it a send. We spent quite a while sledding down this hill, runs usually starting smooth and fast, and ending with a crash landing into the soft powder. We even met some fellow backcountry sledders who had brought their own plastic sleds and came hiking with the purpose of walking the uphills, and sending it down the downhills.

The rest of the afternoon consisted of generally exploring and relaxing, with people trekking up further to enjoy the impressive panoramic view from first peak, or just hanging around the site and soaking in the silence of the snow. The clouds had settled into a nebelmeer (sea of fog in german) below us so that although in reality we were a quick drive from the city, it seemed as though we were in a paradise above the clouds, isolated from the rest of civilization. From the viewpoint at our campsite, we got to experience the pinks and yellows of the sunset, and the extraordinarily bright and full moon rising to the east.

It was at this point that the cold started to set in. As the worries of frozen and soaking feet became a reality, under the moonlight we gathered around the snow table that Diego had graciously constructed for us, and began the evening. Starting with folk music, warm food, and freshly made mulled wine, the night quickly got more exciting. Folk music turning to dancing music, and mulled wine turning to vodka. As the dancing increased and the drinks continued to flow, cold feet soon became a thing of the past, and we enjoyed a full night of laughing and dancing with friends that we didn’t know before the morning. 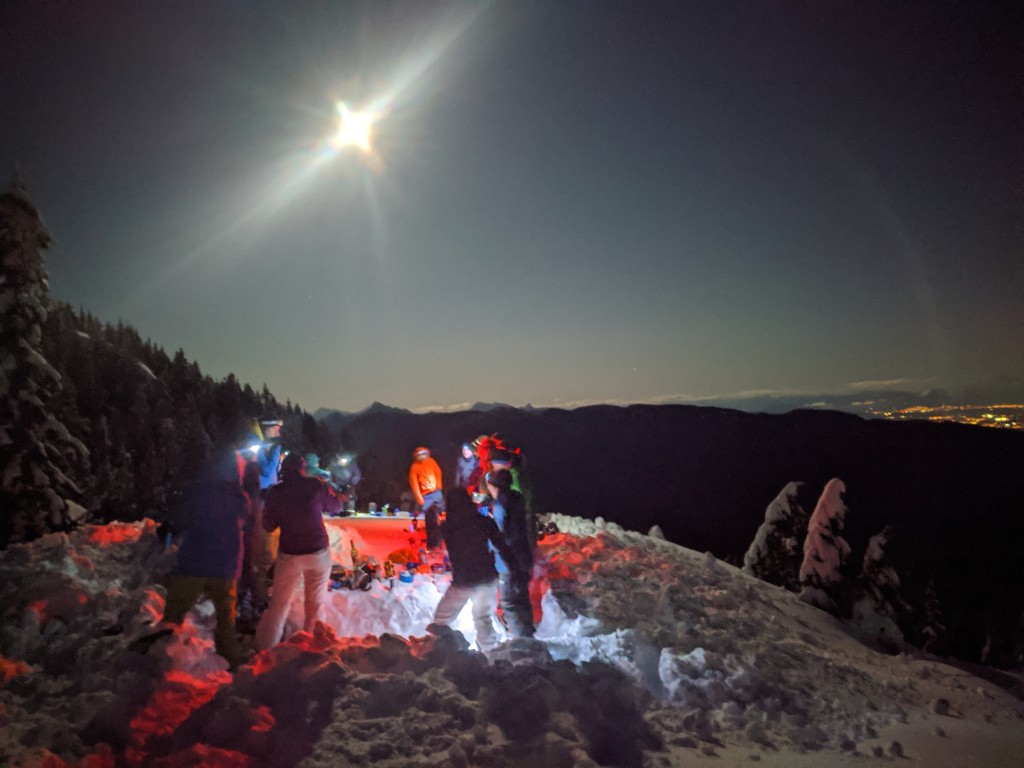 We arose the next morning, with varying levels of sleep, and put on our soaking, freezing boots. We were freezing and tired, but stoke levels were still pretty high, and after just a few packets of warm oatmeal we had returned to maximum levels of stoke, and were ready to get going with the day. With still beautiful weather, we began to go our separate ways, heading back down the mountain in our respective car groups. Except this time we had the knowledge and expertise to slide down the downhills on our butts, making the trip somehow even more exciting than the way up. Tired and sore from a restless night in a tight, uneven, snow cave with the tingling cold still lingering in my toes, we got back into the car and enjoyed the bliss of heated air and soft seats on the drive back to campus.