It began with an early morning as two cars containing Beth, Isaac, Joe, Josh, Lucy, Min, and Sam ascended the misty winding road up to Seymour Mountain. The parking lot was apocalypse-like with few cars and a heavy mist blanketing the whole mountain. Our original plan was to hike a loop trail around the west side of Mount Seymour Provincial Park with optional jaunts up Mount Elsay and Mount Seymour. However, we soon learned that the hike would likely take 6ish hours just to get to Mount Elsay due to poor trail conditions. Not to mention the very low visibility and only vague promises of ‘partly cloudy’ at wildly different times in the afternoon depending on which weather app we were looking at. Thus, we made a change of plans and decided to ‘hike until we don’t feel like hiking, then turn around and hike back’.

The conversation – like the weather – was relatively grim, with topics ranging from wildfires and global climate change to the Chinese and US governments (cheery, I know). Despite this, it felt like just the way to get outdoors over the weekend. The hike was pretty short, and we took it relatively casually, taking frequent breaks as we found ourselves passing Seymour first (Pump) and second (Tim Jones) peak. While hiking up, there were some pretty steep sections on slippery rocks as well as a few patches of snow at higher elevations, but it was overall a nice and well-marked trail.

Our decision by this point was to make it up Mount Seymour for lunch, and see if we could wait out the clouds and get a nice view. I lugged the good ol’ MSR Pocket Rocket© up the mountain so I got to enjoy some nice warm instant ramen. We waited, and we waited, and we waited some more but the mist only seemed to get thicker with time so we headed back after a nice long lunch break. As we were heading back down, the clouds did disperse a bit so we took the jaunt up to Pump Peak for some nice (if intermittent) views of the ocean and Vancouver before making our way back down to the cars.

Quick shout out to Beth who organized this trip, and to Min as this was his first trip with the VOC. Hope to see you all on more adventures! 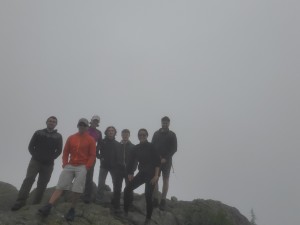