Out of the twenty-four interested VOCers to the eleven committed to the six that actually showed up, I was part of the final crew who decided that spending my weekend in the pissing rain on a mountain with the white void for a view is a good idea. I am convinced there are some inextricably link that triangulates me, the rain-gods, and Golden Ears Park. This time, I’m taking five others down with me. 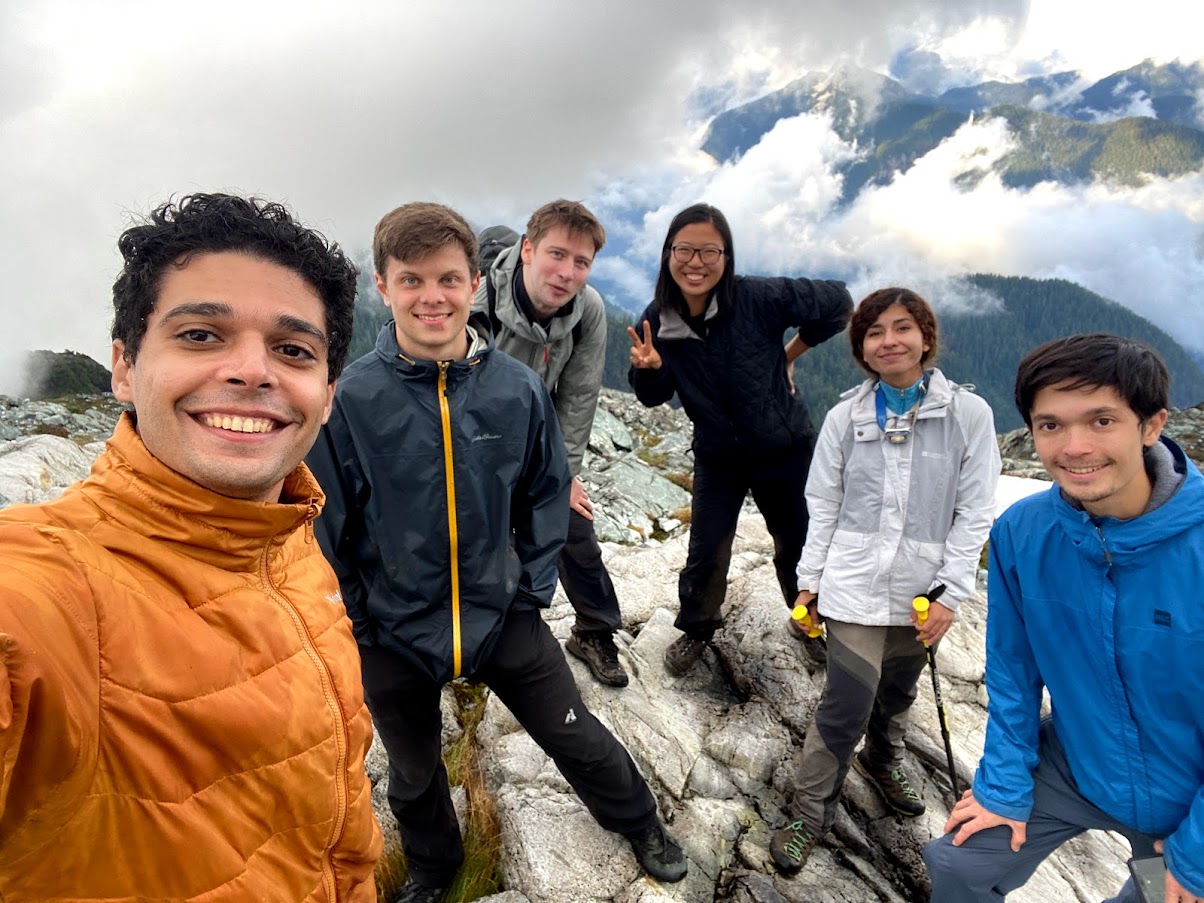 Look! We actually weren’t too miserable!

On the drizzling way there, Sahar Mavali graciously offered to share her tent with me while describing how she had just bought it second hand and the inside of the fly seems to be shredding some white flakes that suspiciously resembles the waterproof coating… We distracted ourselves from our inevitable doom by discussing how everyone tends to be very shy at playing music on car rides, and I opted to queue songs from Luke Mantle’s playlist so we can share the judgement and at least 50% of the people in the car would enjoy the music.

The park was quiet aside from the patters of rain. No one bothered to check our camping permits when there are usually full line ups, detours, and yellow vests most other days. We faffed around in the parking lot waiting for the other car and worried about whether we’ll actually be able to meet up without service… Alas, we found each other, threw on rain jackets and pack covers, and set off into the woods. 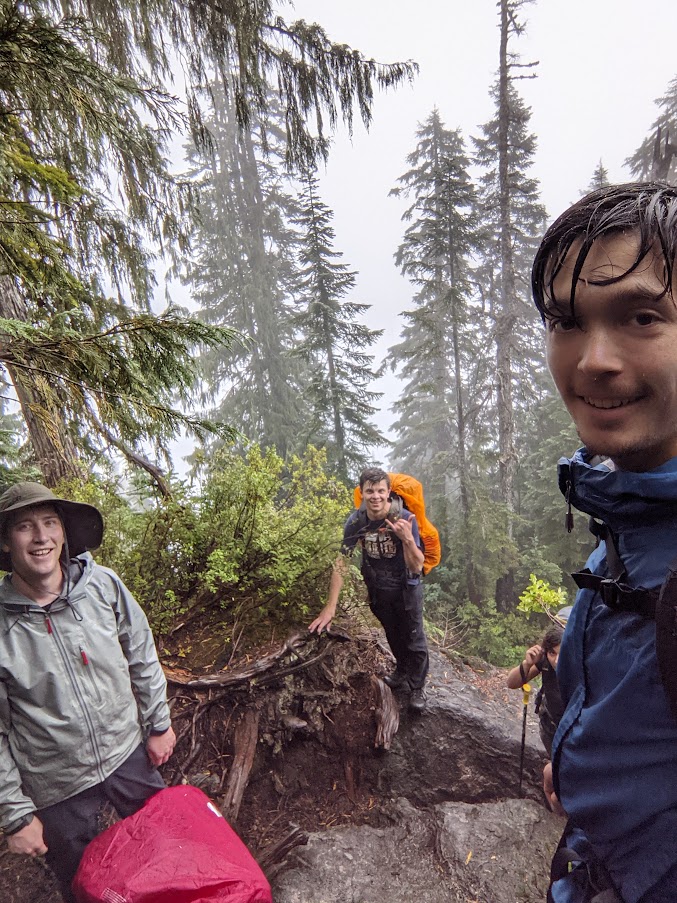 We followed the West Canyon Trial for the first 5 kilometers which was rocky but flat. Among other small talk topics, we also discussed stereotypes of Chinese people, Egyptian cuisine, emotionality of different instruments (shout out to the cello!), and cool fantasy books.

The woods blurred by, and the rain painted the trees in one cohesive brushstroke. By the time we arrived at the East West connector bridge, sweat was beginning to mingle with rain. We attempted to find the “viewpoint that’s 5 minuets away!” according to downward hikers, but settled for a rocky grove to hide away from the rain for lunch. 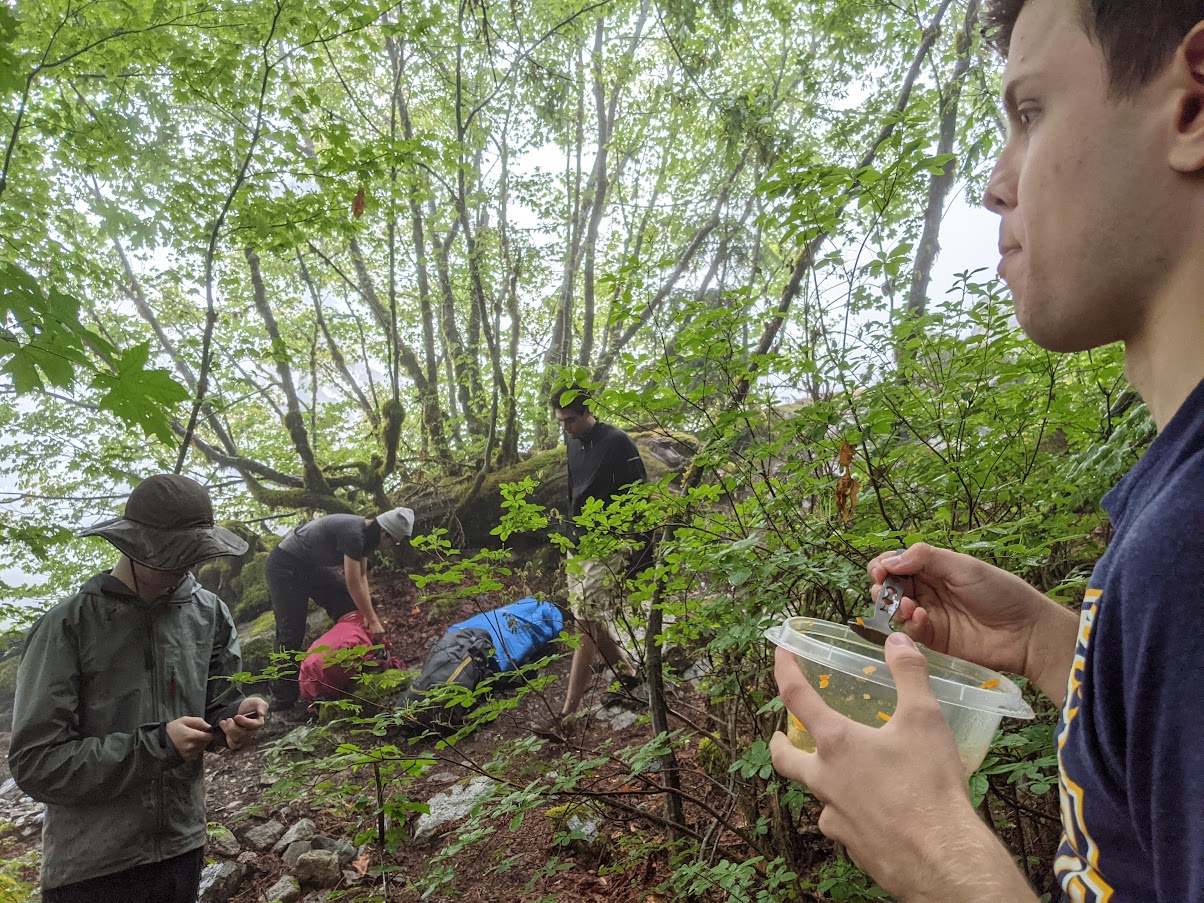 Then we ascended some ladders that were made for giants and hoisted ourselves up some steep boulders and roots. We operated under the assumption that it will not get any less steep, and was pleasantly surprised every time the hill seems to flatten out shortly. There were multiple (imaginatively) beautiful viewpoints along the way. In all seriousness though, we came to appreciate the artful layers of mist rising out of the valley, mingling with damp branches and foliage. 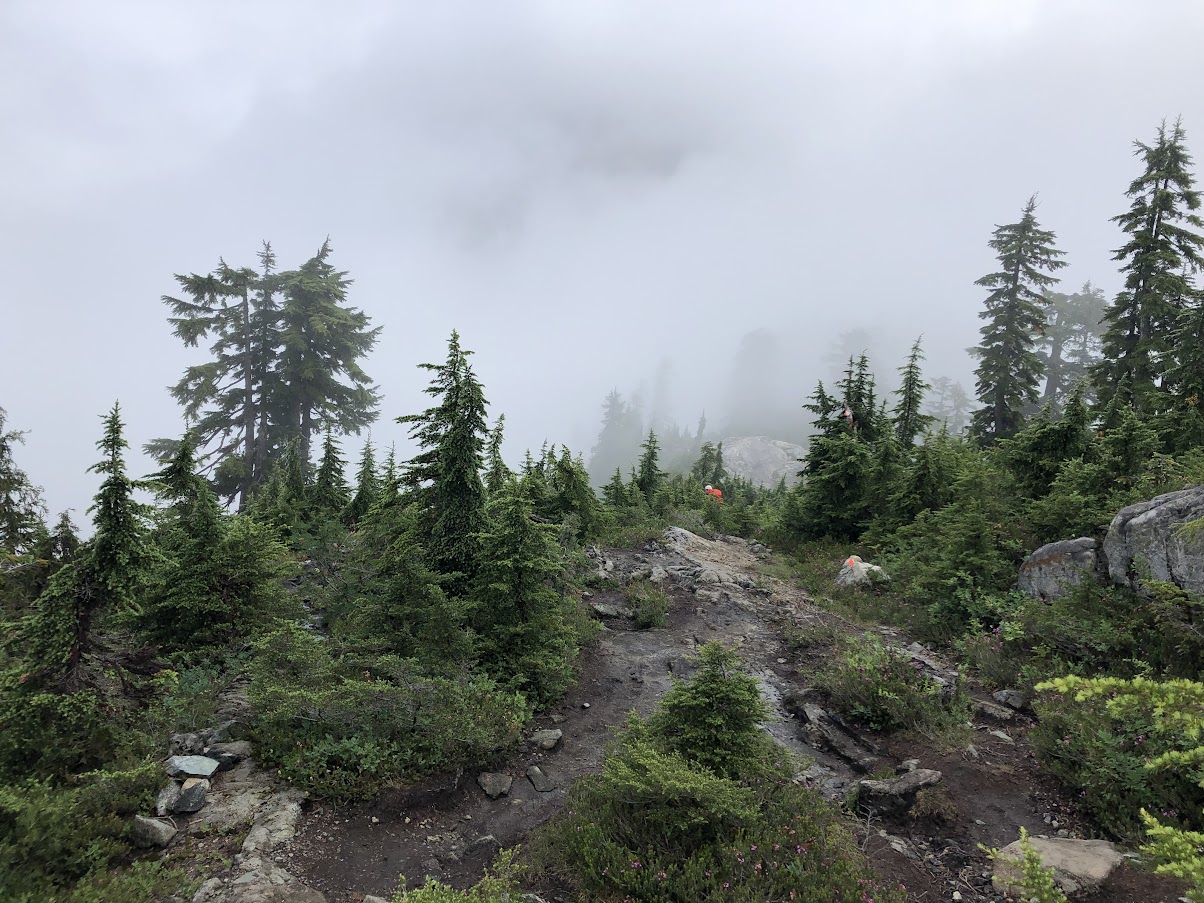 When we finally arrived at camp (the lesser-known Panorama Ridge Campsite), we were confronted with an issue we have not considered: the tent pads were all filled up with tents of backpackers who arrived before us. There were massive boulders everywhere and we could not find any flat patches to camp at all. We wandered towards to the summit, seeking flat spots and contemplated options of returning back to the cars, asking i-took-a-whole-tent-pad-for-my-single-person-tent campers to shove over, or to camp underneath the wooden tent pads so someone will eventually feel bad enough to share their space… This resolved when the clouds dissipated a little. There was a perfectly great tent pad and some flat gravel ground just hidden on the other side of the emergency shelter. We completely walked past it because the atrocious visibility.

As we set up camp, the rain began to thin… and stopped!! Knowing we’ll have a place to rest our heads and filled up on some snacks, we headed toward the summit. 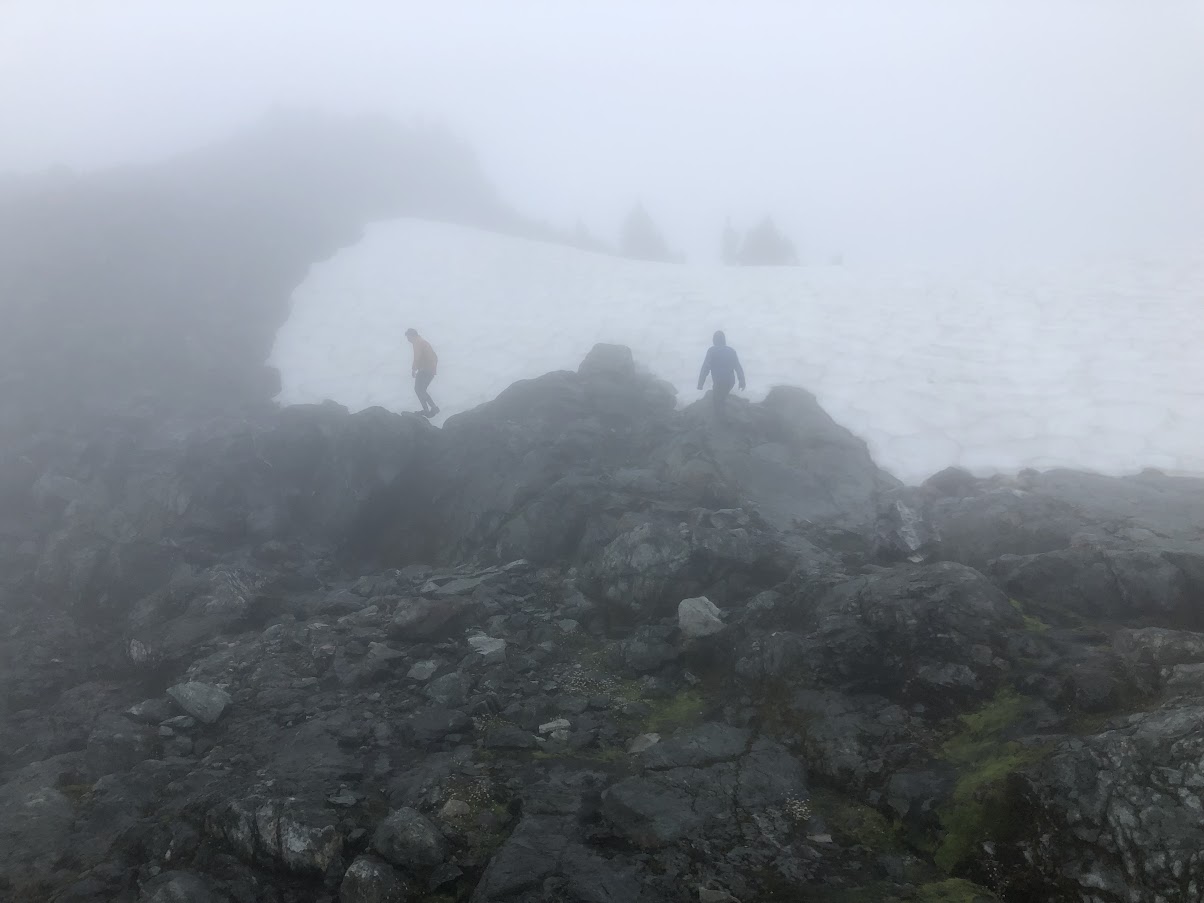 Most of the ice was pretty avoidable, but the route still involved a fair bit of steep scrambling. The clouds around us were so thick that the climb was pretty disconcerting. Most times, we had no idea how far the fall is off the edge… luckily, we didn’t find out. 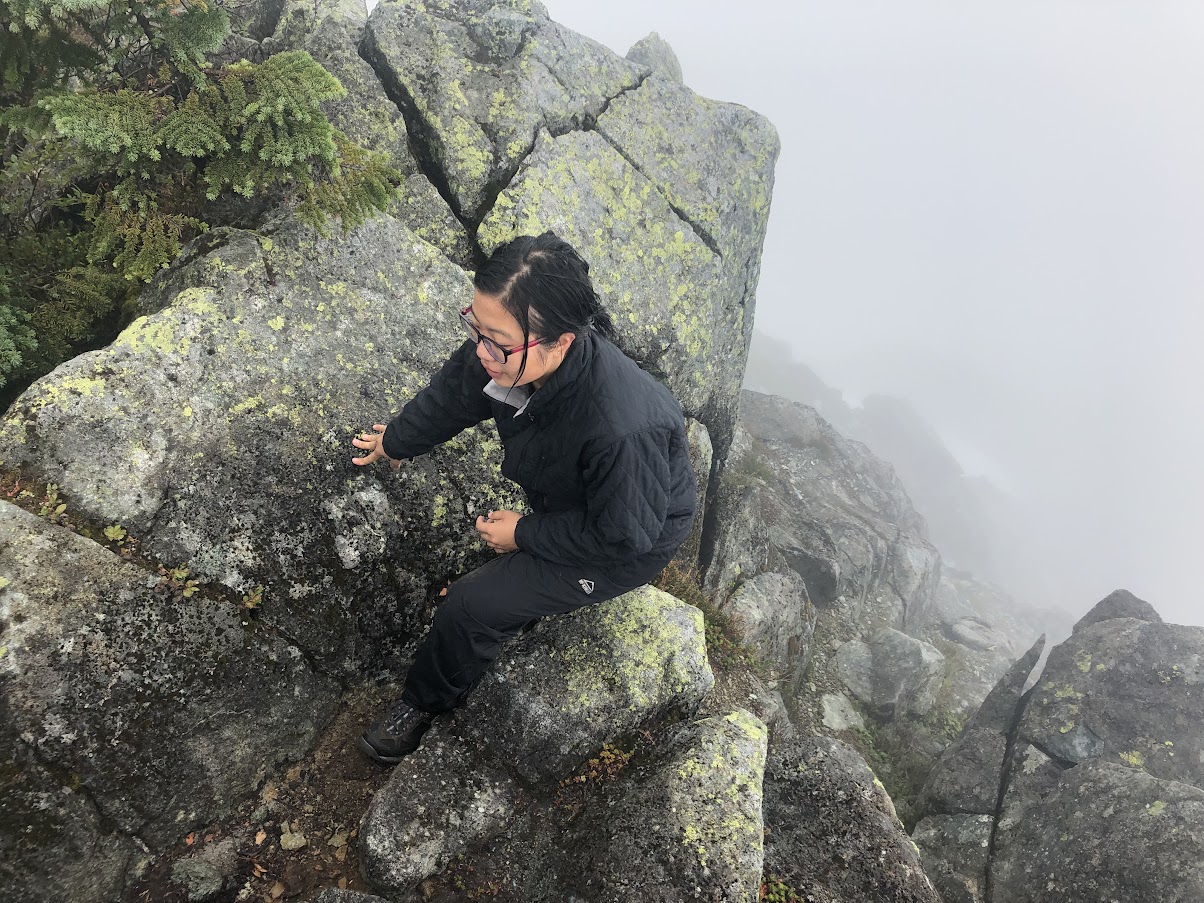 There were promises of the sky opening up around late afternoon and evening, so we crossed our fingers. We got ridiculously excited over a patch of ephemeral blue sky peeking out. The summit was pretty nice. All we could see was each other and even that was not guaranteed at times. 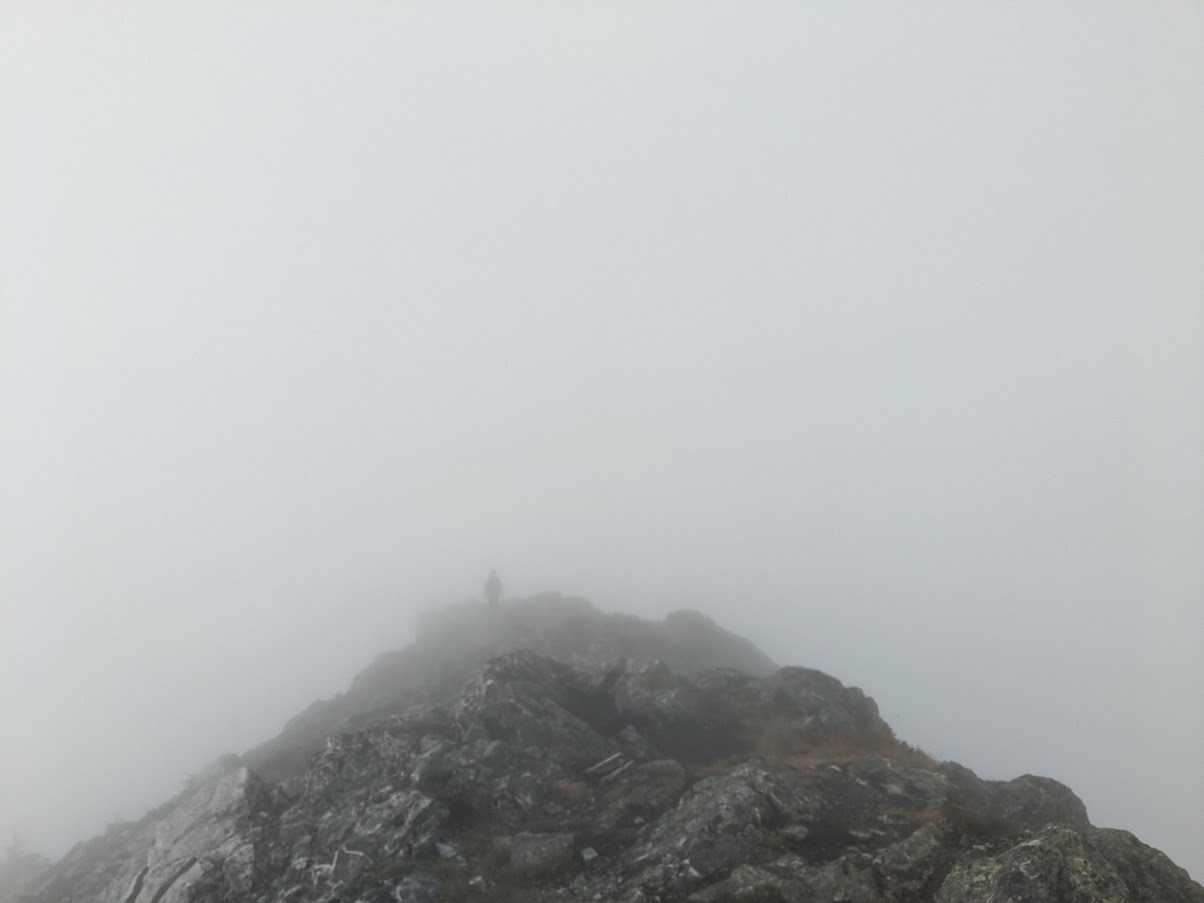 Looking like a shadow on the same summit Photo – Joseph Meyer 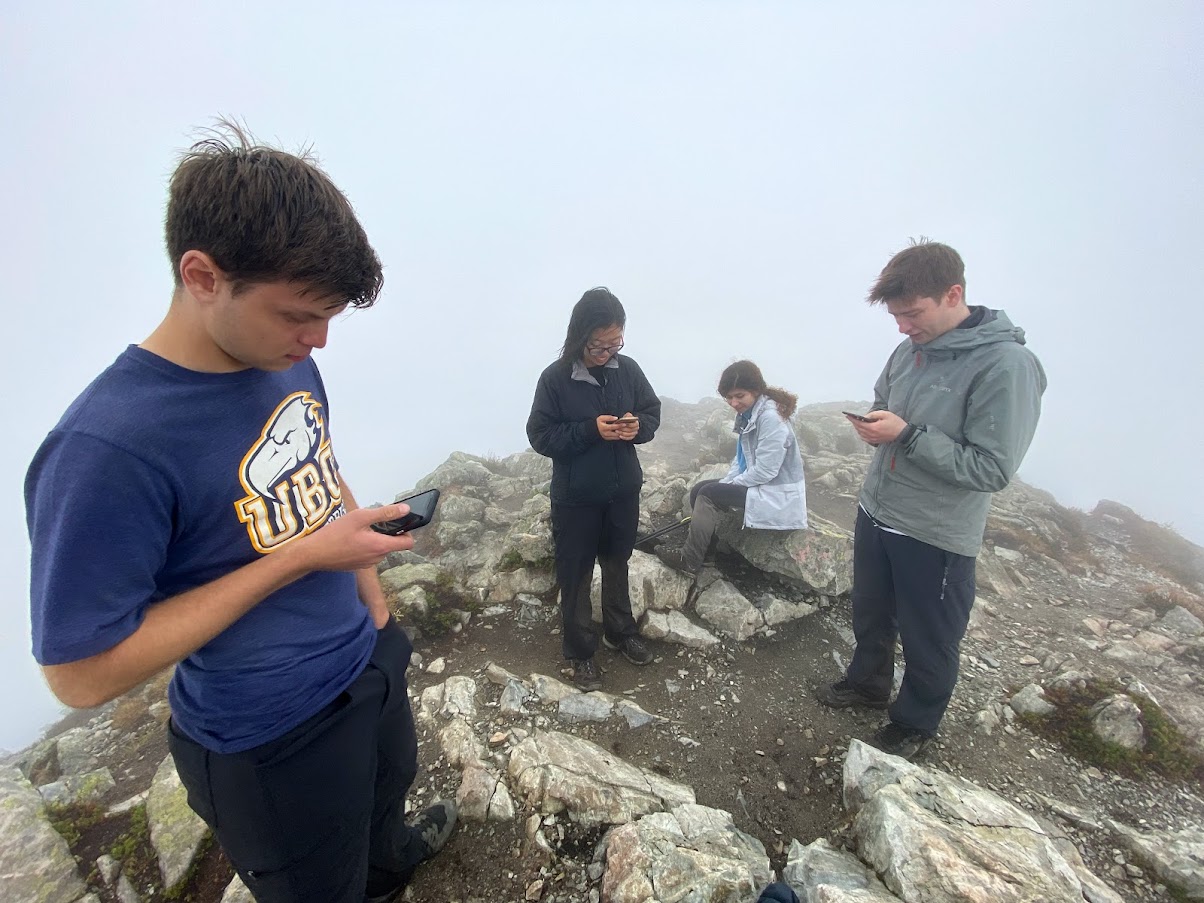 We challenged each others’ knowledge of North American geography while we waited. The UV levels seemed to increase as the clouds thinned but unfortunately, they did not dissipate enough to see through. Many of us were motivated to do it again on a clear day.

Yes, I know, we are the view

On the way down, the clouds opened up somewhat! We had a mini photoshoot to celebrate and discussed how to best pose for photos. 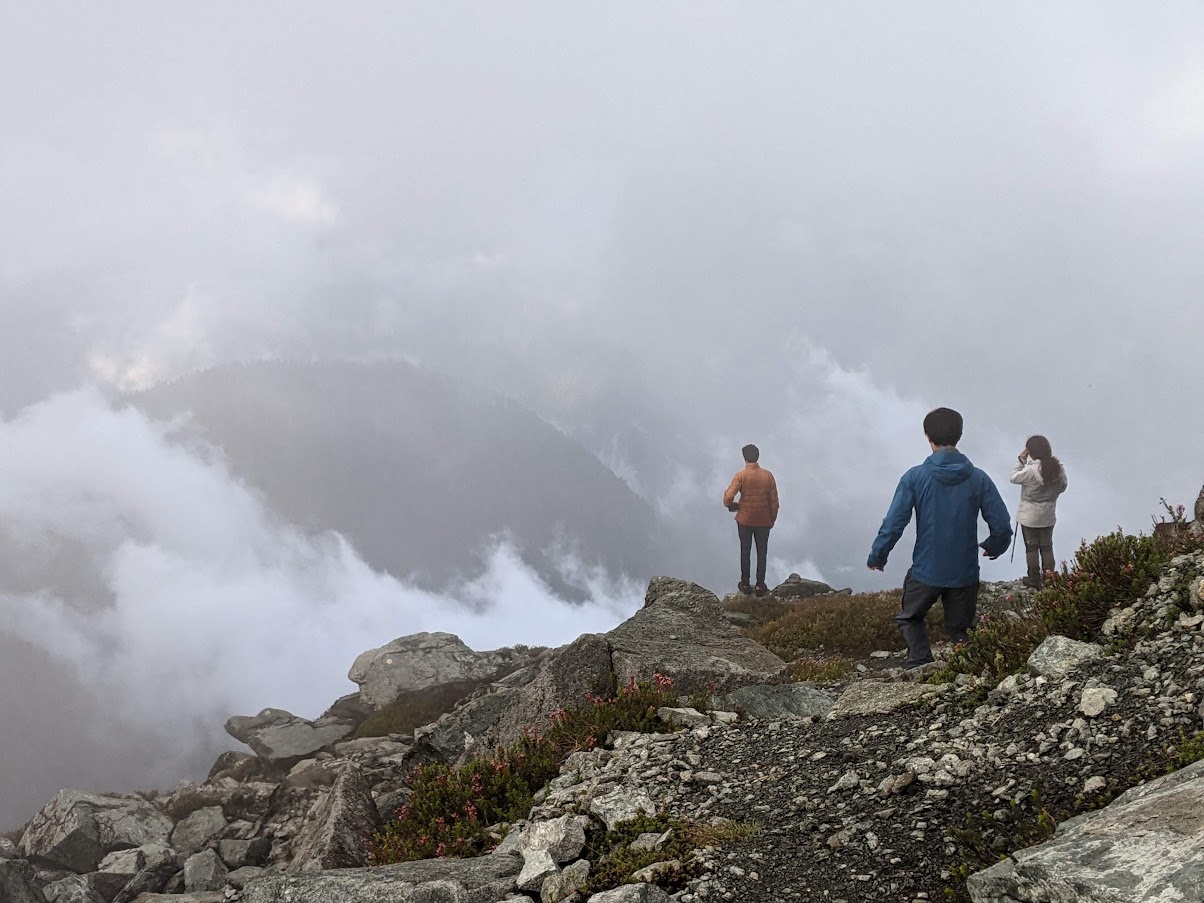 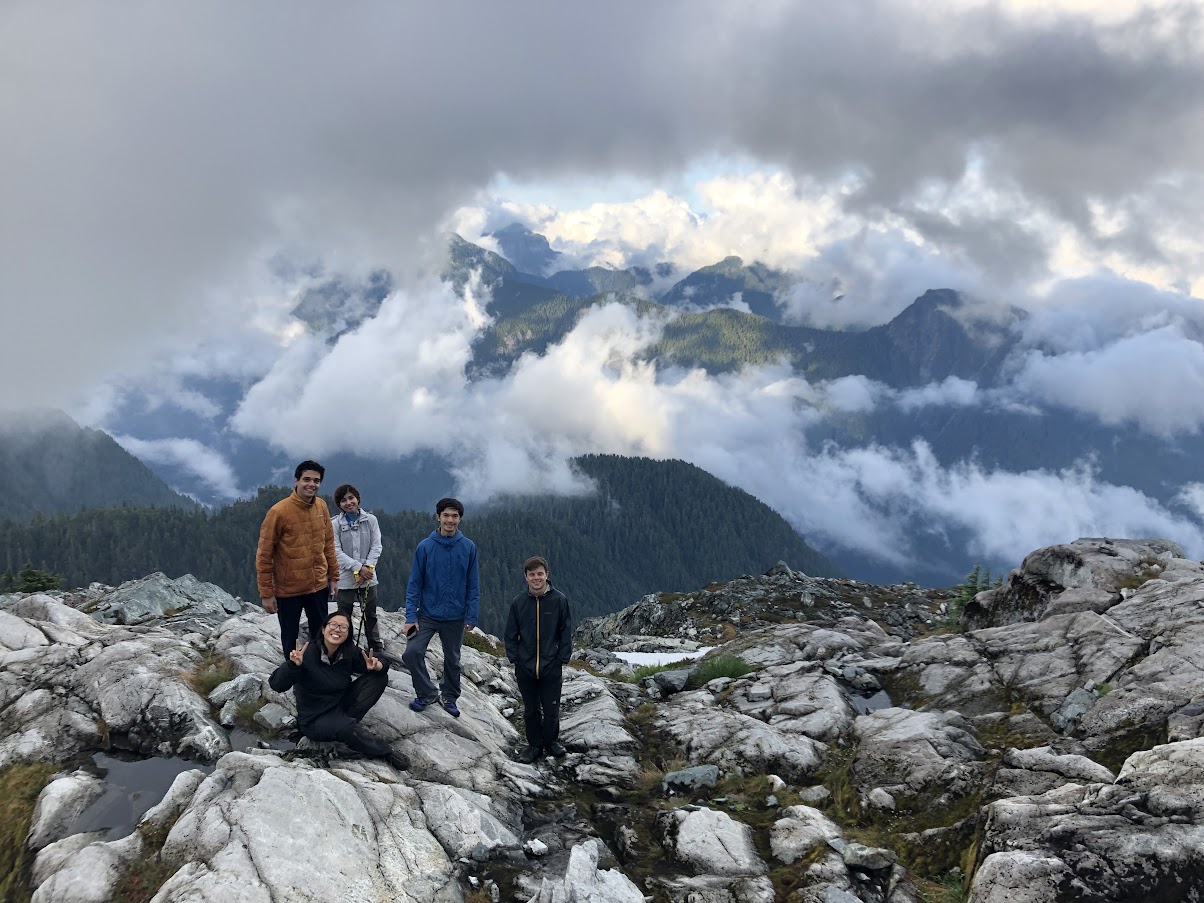 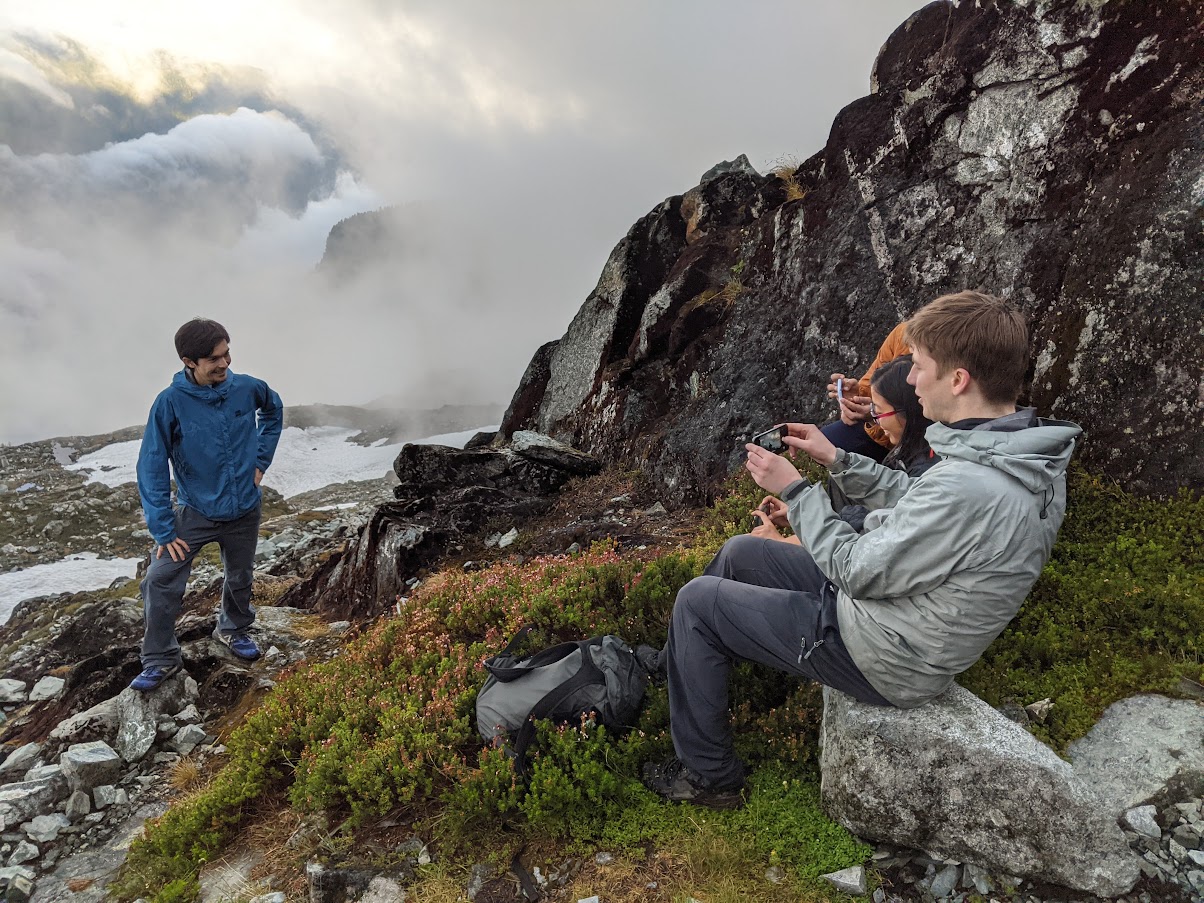 Back at camp, we debated whether the sun had set behind a cloud or a mountain until it eventually actually did set. We had some nice dinner while gushing about the versatility of clouds. 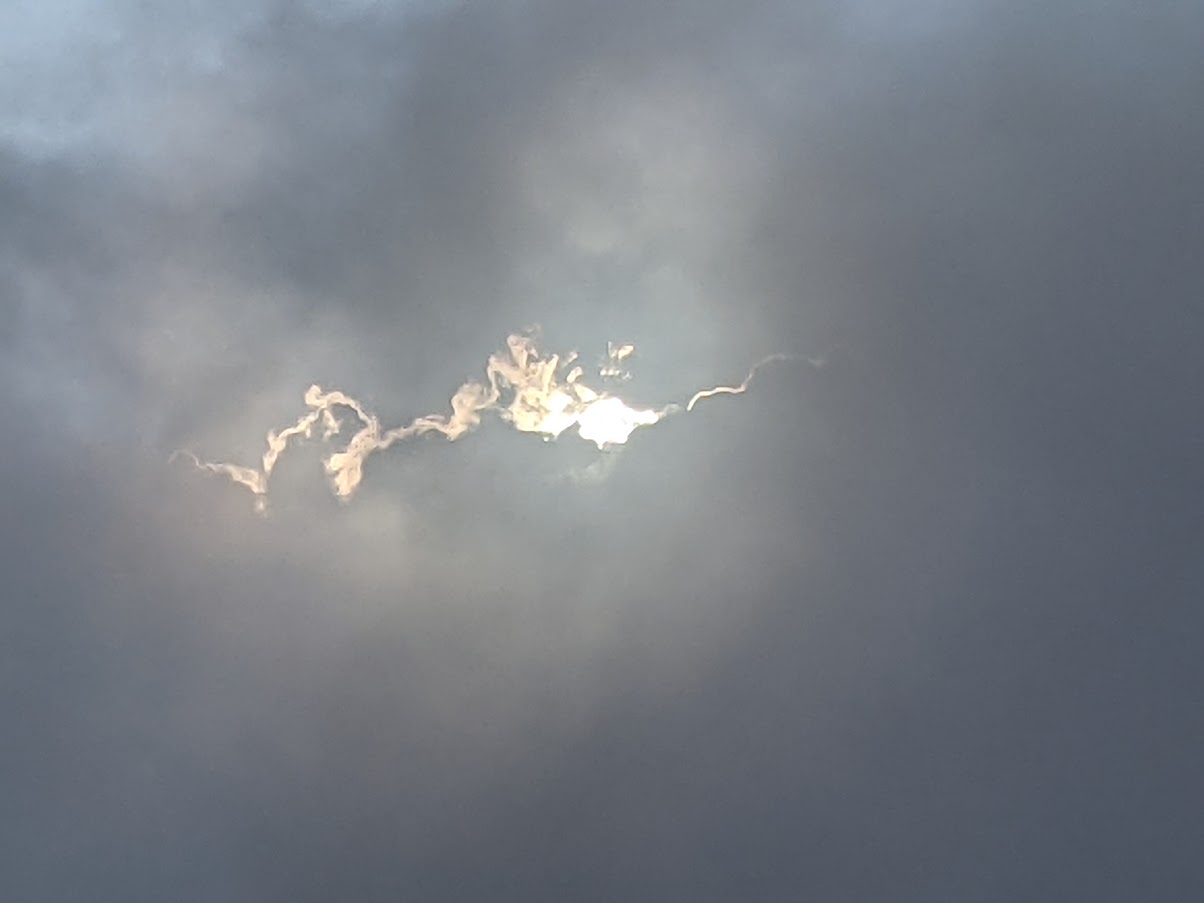 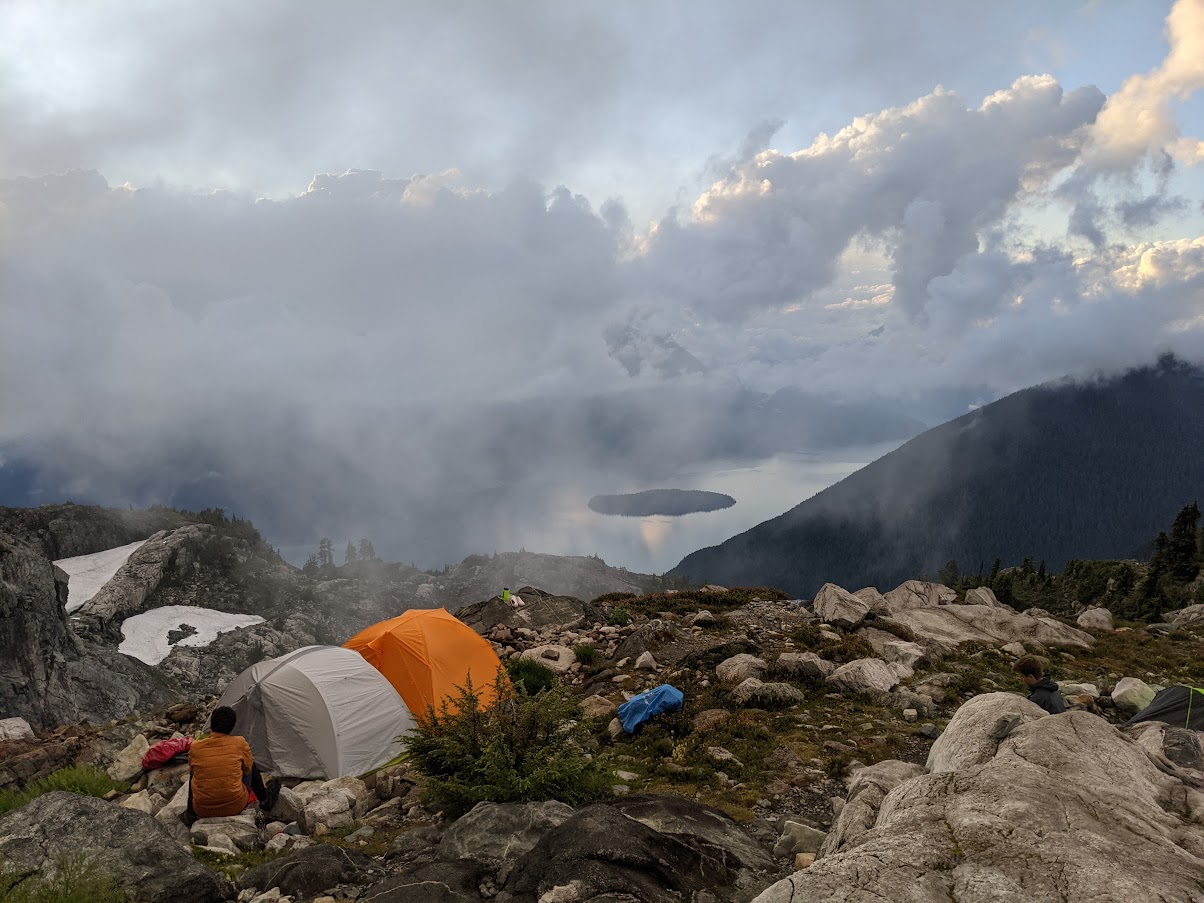 Thanks Joe, for sharing your stove and water filter so I did not starve. Most of us did not want to sleep quite yet, so we reconstructed our side by side two-person tents into one large one where the five of us played Complots (the French version of Coup. 4/5 did not speak French), a game of lies and strategies and luck. Matthias Sachs and Karim Elkholy teamed up and stabbed each other in the back unnecessarily. Luke won with simple but effective analytical strategy. Sahar put on a non-lying visage and was rewarded by karma (and her lies).

When we finally packed up for bed, I looked outside and saw the entire Milky Way open up to me. Absolutely unreal. Especially for a city girl like me. I was astonished by the vastness of the universe that goes by unnoticed while I stress about my very small, mundane stresses. I laughed at how self-important I can feel.

With the clouds cleared, I wondered if there was a chance I might catch a nice sunrise. Impulsively, I set my alarm for 5:45 in hopes of catching one (Panorama Ridge campground has notably nice sun-views. That’s what convinced me to go on this trip in the first place). We were lulled to sleep by the rushing glacier falls near by.

Before my alarm could sound in the morning though, I woke to the merciless hammering of rain on our tent fly. Even with the flakey waterproof layer, our tent did in fact hold up to mother natures challenge. No for the rest of my pack and shoes though. I was overconfident about Her temper and did not bother to keep either of those under waterproof layers… I suppressed my anxiety at the anticipated discomfort in the morning and went back to sleep.

The morning rolled by, and things were expectedly wet. It was a-okay though. We faffed and ate and packed up and headed back down the glisteningly wet mountain. We had some interesting conversations about Chinese tourists and liminal space and ancient time systems and American National Parks and future trips. 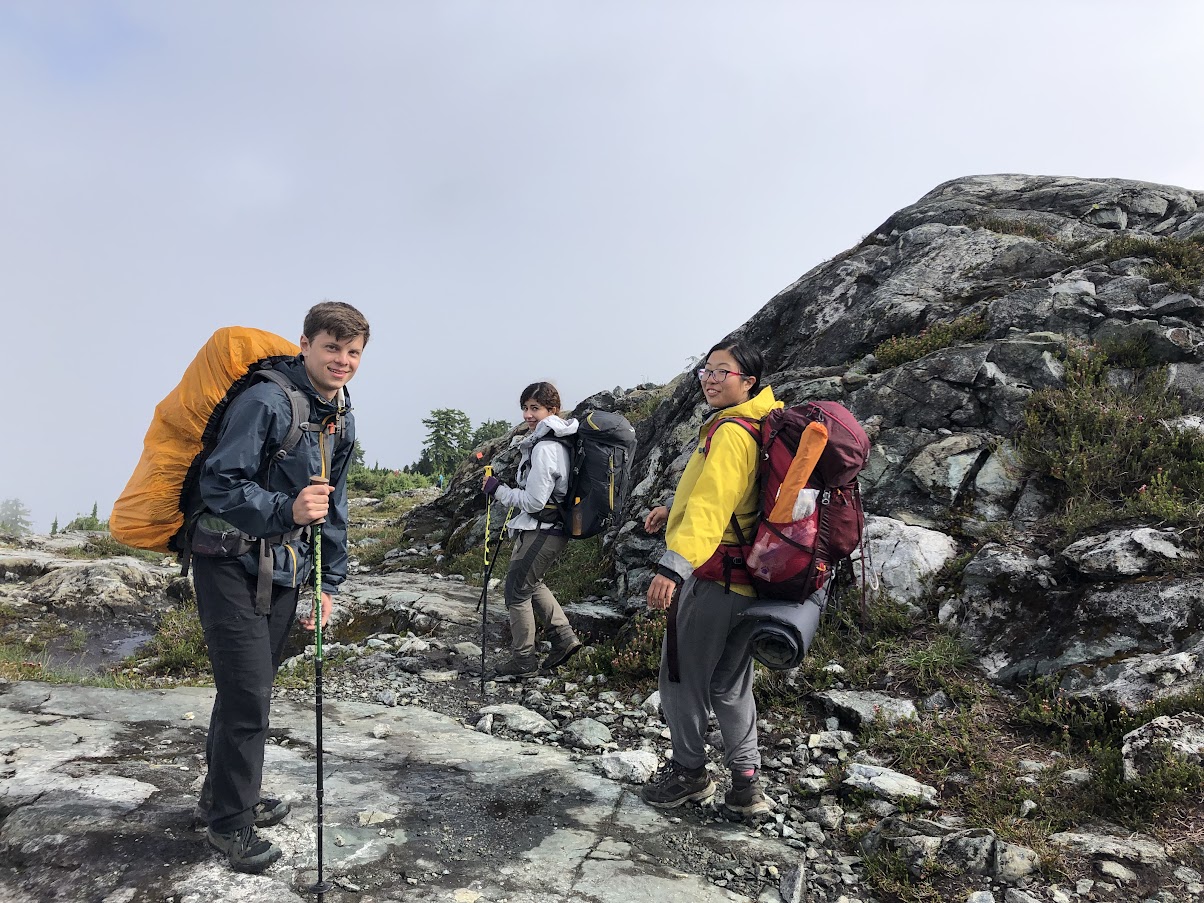 Oh! Didn’t see you there 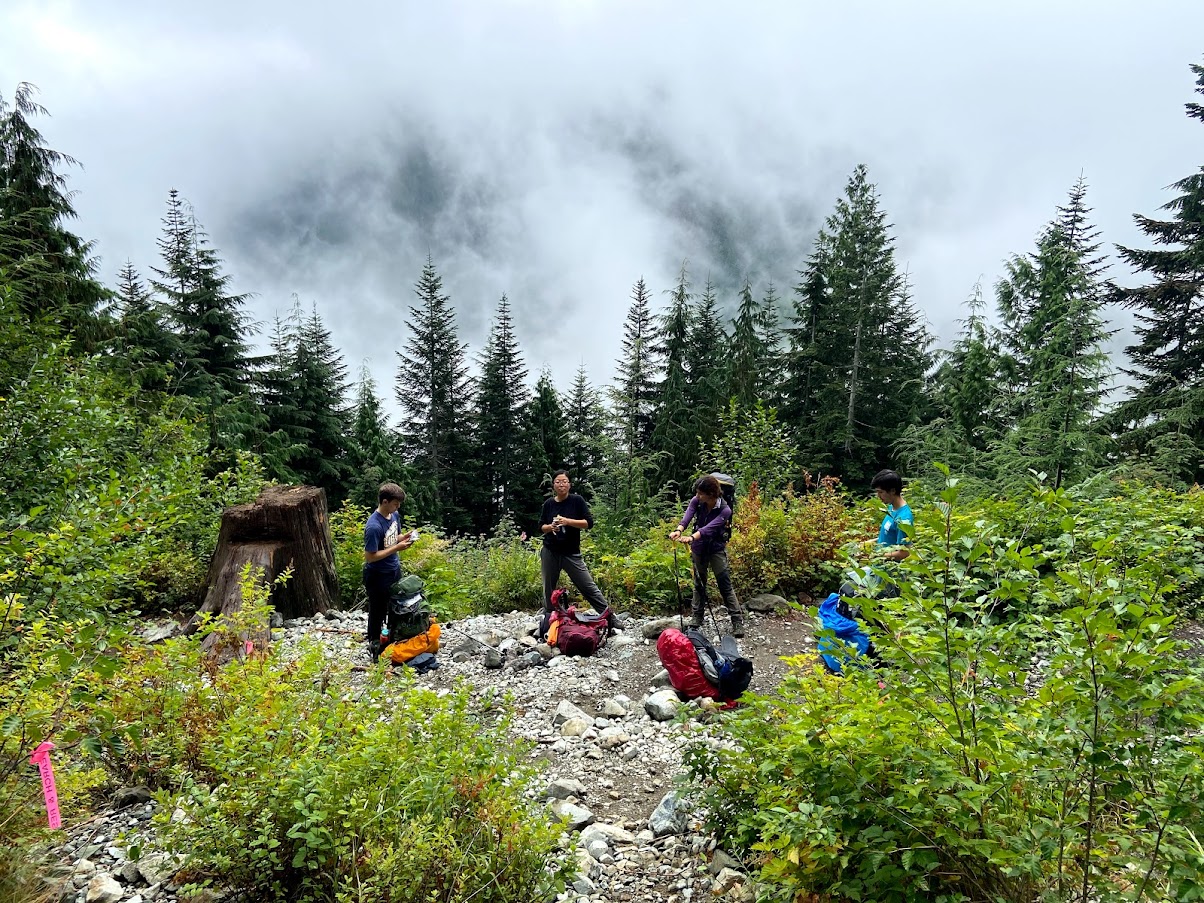 We stopped at a Windex-coloured river for lunch/snacks. Everyone skipped some rocks while I skipped on them and missed and soaked my left foot in the windex river. The last 5 km was a very chill hike to wrap up the trip.

Our cars were waiting in the parking lot to take us some place dry with good food. We settled on Banana Leaf. What felt like a lot more time had passed, and we were fed with yummy food and happy to be heading home after a Type 1.7-ish fun trip.

Shout outs to Joe for organizing this trip, teaching me how to use a Sawyer Squeeze (and failing miserably together at the next trip), and literally everything else; Sahar for being the sweetest and sharing your tent with me; Mattias and Luke for bringing unique conversations to refresh my perspectives; and Karim for the immaculately chill vibes you brought. 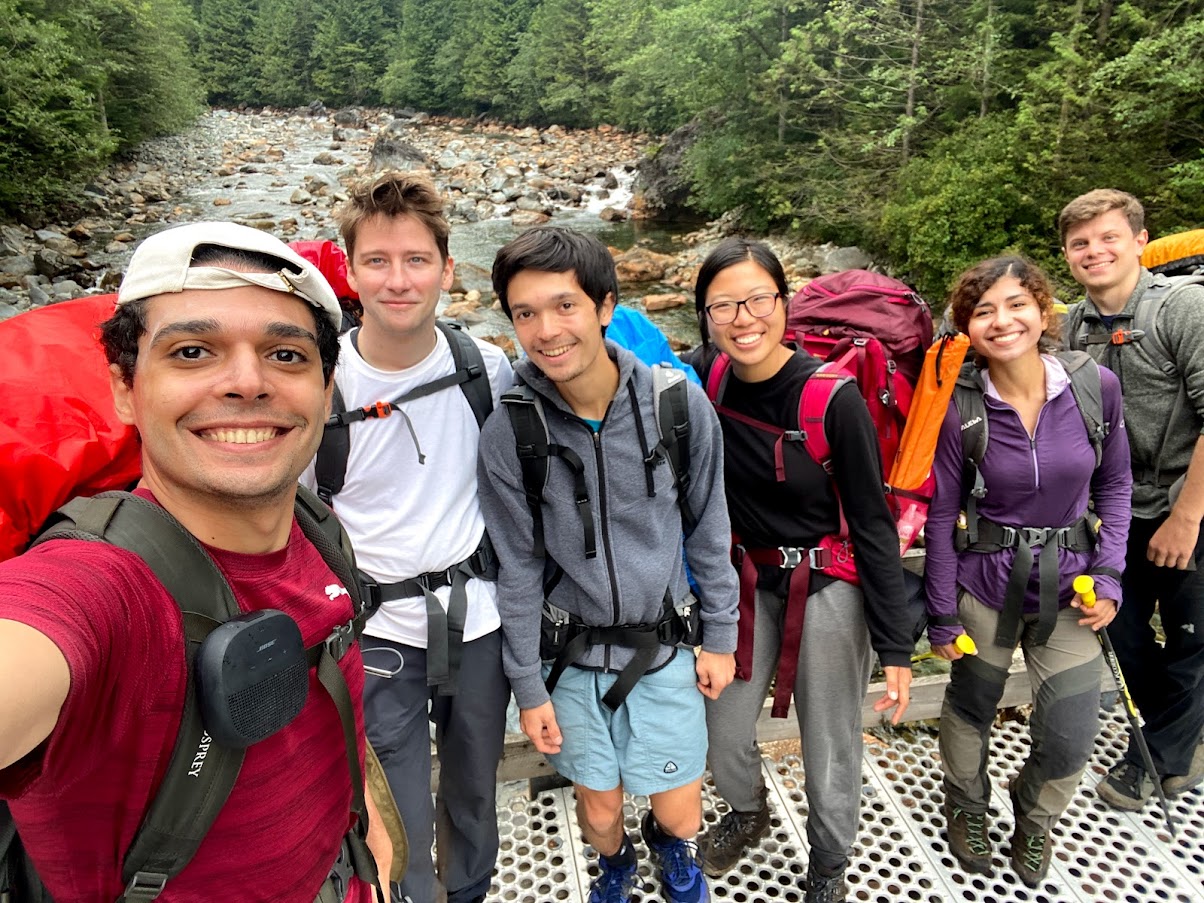