On Saturday, October 30th 3 VOCers set out to take advantage of the sunny weather and recent snowstorm. We decided to go to Shovelnose Creek, a hot backcountry skiing destination accessed by a long drive up the Squamish River Valley. We began to gain elevation after turning onto the Shovelnose Creek FSR and were greeted with amazing views of the Mt Cayley Massif:

Overall, the road was quite smooth and in great shape. However, there are some nasty water bars and a few loose spots that definitely require 4WD and high clearance. I took a few heavy dings to the bottom of my Toyota Highlander, it seems to be ok but I don’t know how excited I’d be to do it again. We parked at 1100m instead of the end of the road at 1300m, since it started to get icy and I encountered a steep loose section with a few poorly placed rocks. I most likely could have made it through, but we were close enough and I was a bit over the driving.

The uptrack began in a clearcut, and then went into the woods. The snow was a bit thin here, but enough for skinning and some survival skiing on the way down.

Josh Thorsteinson enjoying some tricky skinning in the woods

The snow conditions were excellent for this time of year, while south facing slopes got a bit crusty later in the day other aspects retained nice soft snow perfect for skiing. We observed some signs of surface instability but nothing large enough to cause serious alarm. First we headed up to a high point on the south side of the bowl that had some nice chutes off the north side. Plenty of people had already skied the main slopes, so given that there were no deep slab concerns we decided it was safe enough to follow tracks down a few steeper slopes. 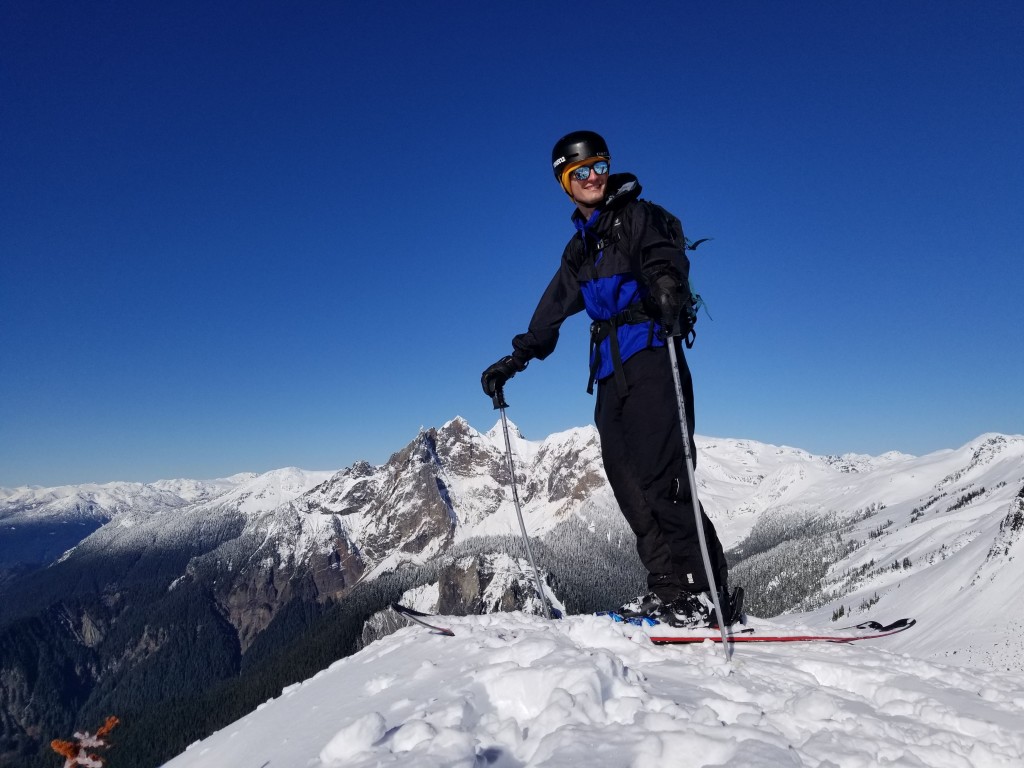 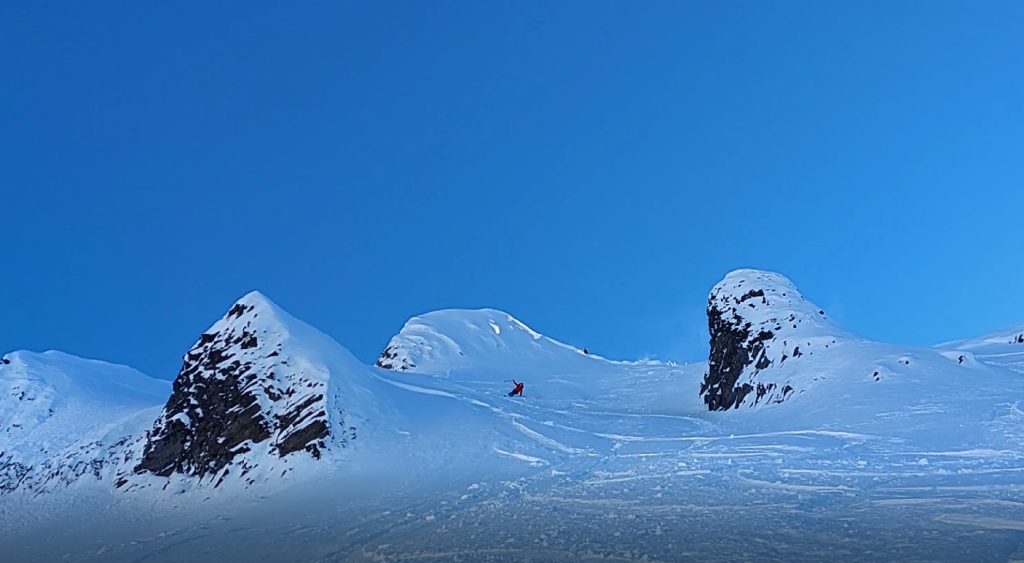 Mike ripping his way down

After skiing off this small knob we were drawn higher up, attracted by the sight of some snowboarders skiing perfect snow down the middle of the upper bowl. We skinned up and around the ridge to a high shoulder, and were greeted by some of the best views I’ve ever seen.

Castle Towers, the Black Tusk, and Mt Garibaldi loomed impressively on the horizon

Whistler Blackcomb looking ready to open on the upper half, with the massive Wedge Mountain overlooking to the north 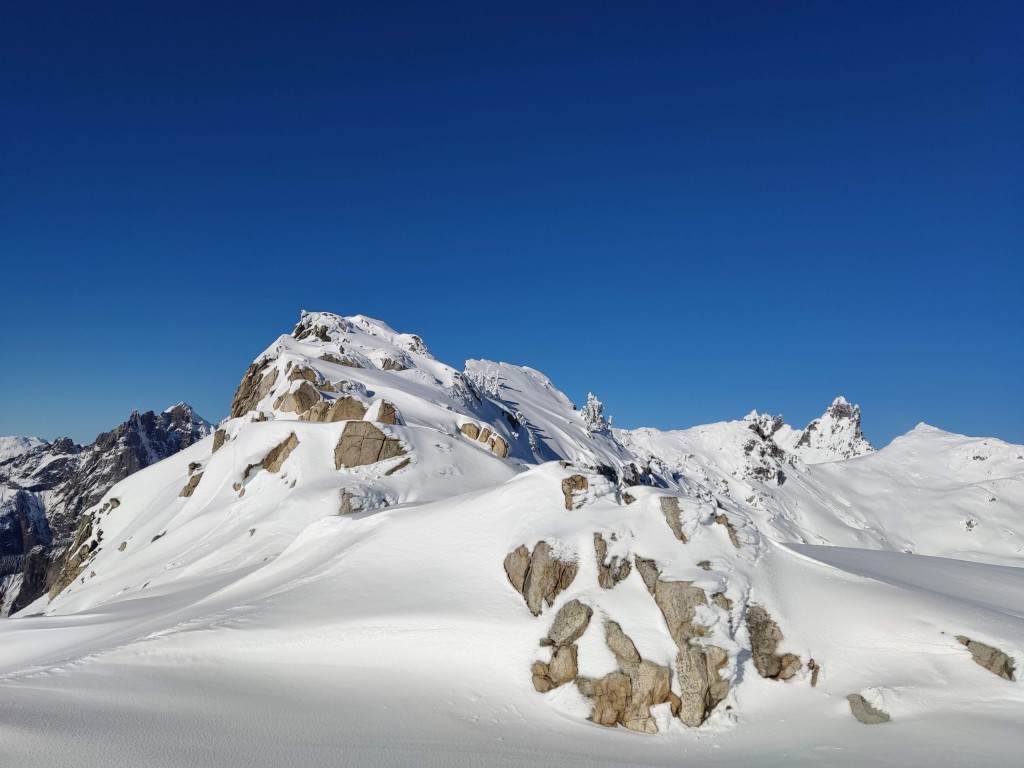 We transitioned and dropped into the ramp into the bowl, getting some great turns.

I found some slashes and mini airs to take advantage of

The lower slopes of the bowl were pretty great too…

We finished the day off by skinning back up to the first knob then enjoying some low angle pow down the ridge we went up in the morning. It got a bit tricky in the bottom half of the woods and in the clearcut, but I managed with only minor base scratches. 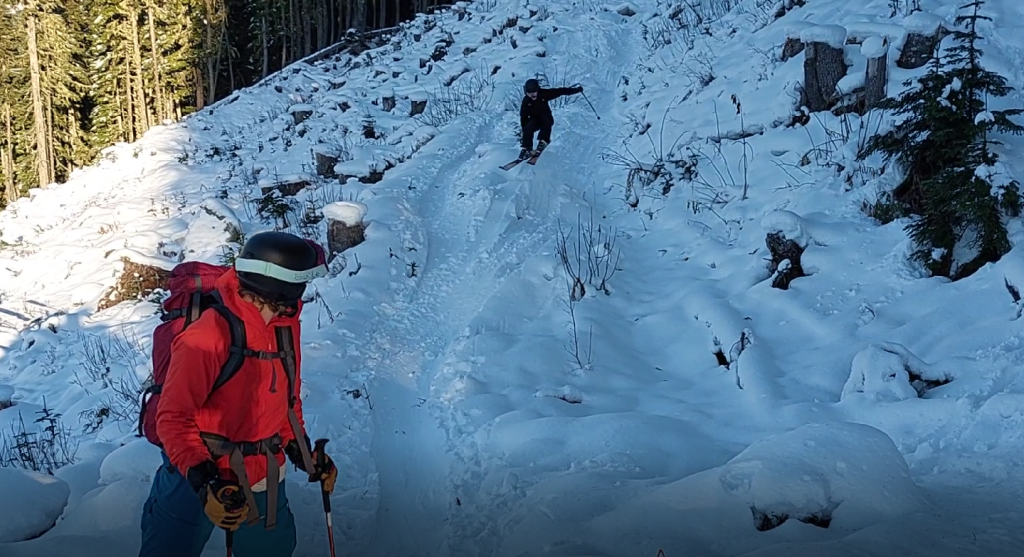 Josh catching air on the skintrack

This was one of the best days I’ve had in the backcountry and for sure the best skiing I’ve ever done in October. I’d highly recommend this location for anyone looking to get some early season turns in. I hope everyone took advantage of the beautiful weekend weather!