I’d never been in a truck before. A big, American, covered in dirtbag stickers, truck. I chucked my bag in the back and squished into the tiny jump seat behind the driver, Ethan. No need for a seatbelt, I was thoroughly wedged in. At 5.15am, the sun had not even considered rising as we drove away from campus.

I’d also never been to Tim Hortons. A VOC classic, I’m told, as we pulled off the highway in Squamish. The donut insides (Timbits?) were wonderfully sickly in the morning, but I stayed away from the coffee, not wanting to disrupt my stomach before a weekend in the mountains.

Up the highway again, just short of Whistler, we pulled off and gathered the rest of the group at a snowmobile car park. We left the two-wheel drive cars behind and attempted up the forest service ‘road’. After a couple of wrong turns, some road rebuilding and a puncture scare we arrived at the start of the trail. 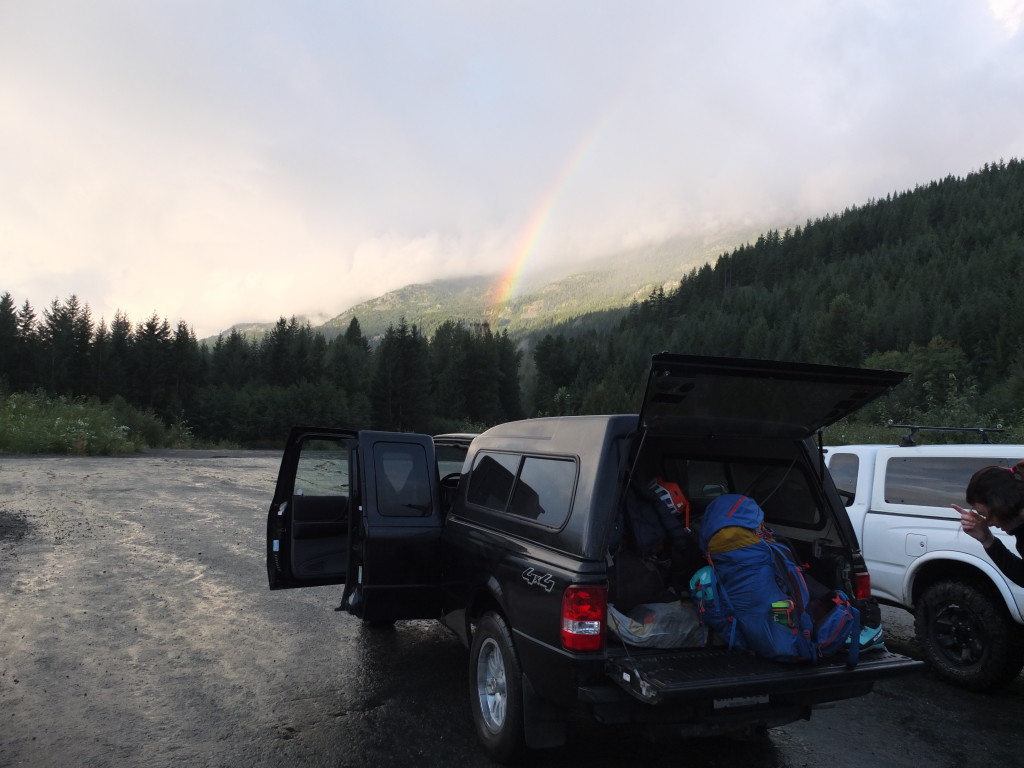 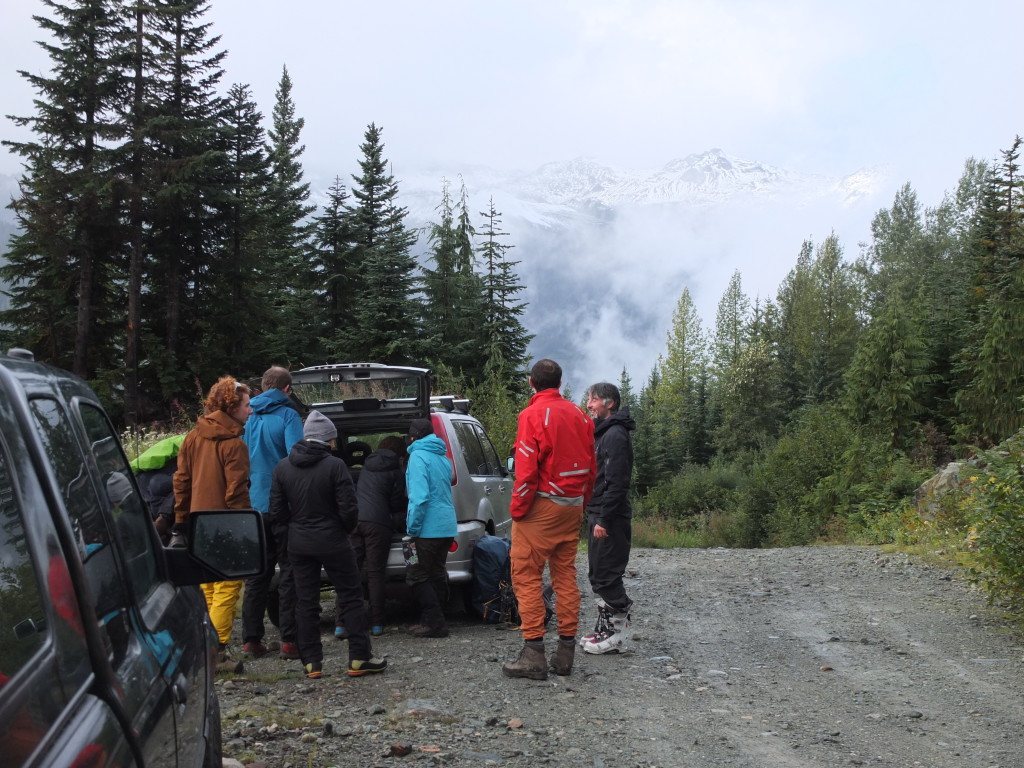 A typical BC scene (Image: Ewan)

The majestic, skyscraper alpine trees gave way to snowy rocks just as I began to sweat under the weight of my bag. Soon we were in snow, scrambling over boulders and trying not to slip. My choice of backpack, a 110L Mountain Equipment kit bag, was regrettable; it had no hip strap. I had heard that the approach was about five kilometres, up to the top of Metal Dome and down the other side to the glacier. I had also heard that the G2 group the previous weekend failed to even reach their glacier; I could see how that would happen. Wiping the sweat off my brow for the umpteenth time, I was certain we’d walked at least ten kilometres, before suddenly the trail topped out and we were at the top of Metal Dome.

1820 metres high, one of the highest mountains I’d climbed and my first in North America. But there was no time for reflection; we were here for the glacier. So we headed off down the other side, only occasionally slipping down the snowy track. 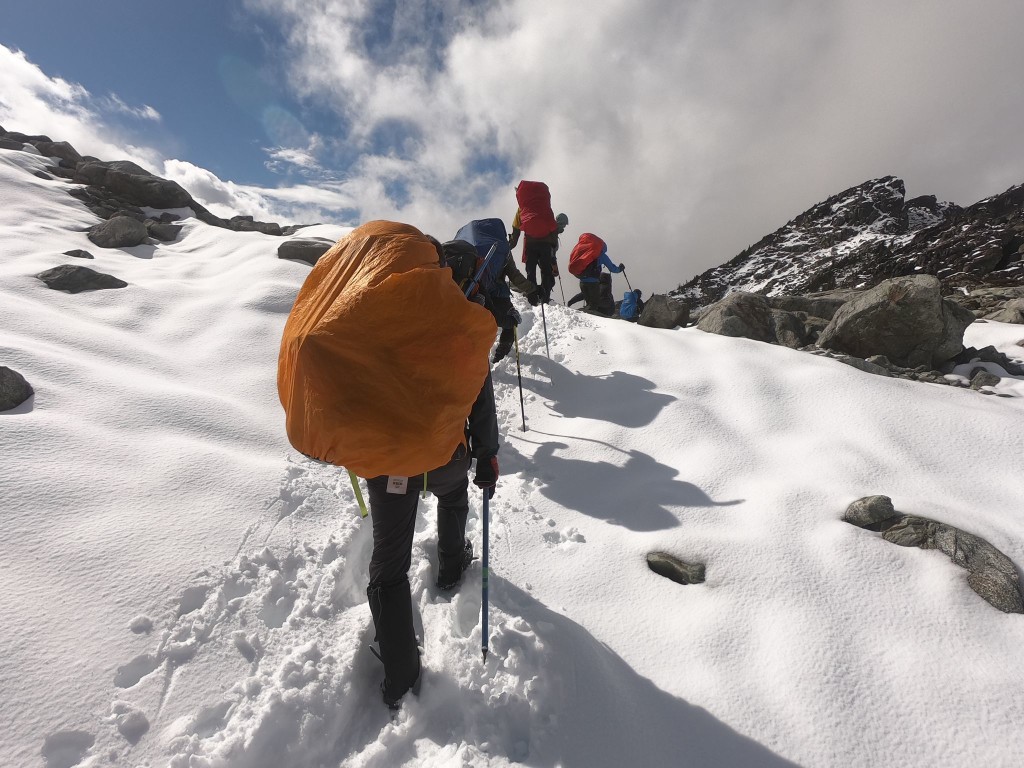 It was, at times, a nice day (Image: Selina Mather)

About 20 minutes later, we were back at the top again. We’d circled back on ourselves, without realising. A disappointing moment.

Eventually, we came across a little col, and decided to set up camp there, while others went to find the glacier. We pitched our tents, turning this patch of snow into our little base camp, and began drilling our alpine skills. T-slot anchors, ice screw anchors, v-threads, hauling systems, roping together. We took turns being pulled down the hill and attempting to self-arrest; fun to practise but scary if you think about it too much.

Soon it began to get dark; time for camping capaletti and soothing mulled wine under the fairy lights to end the night. 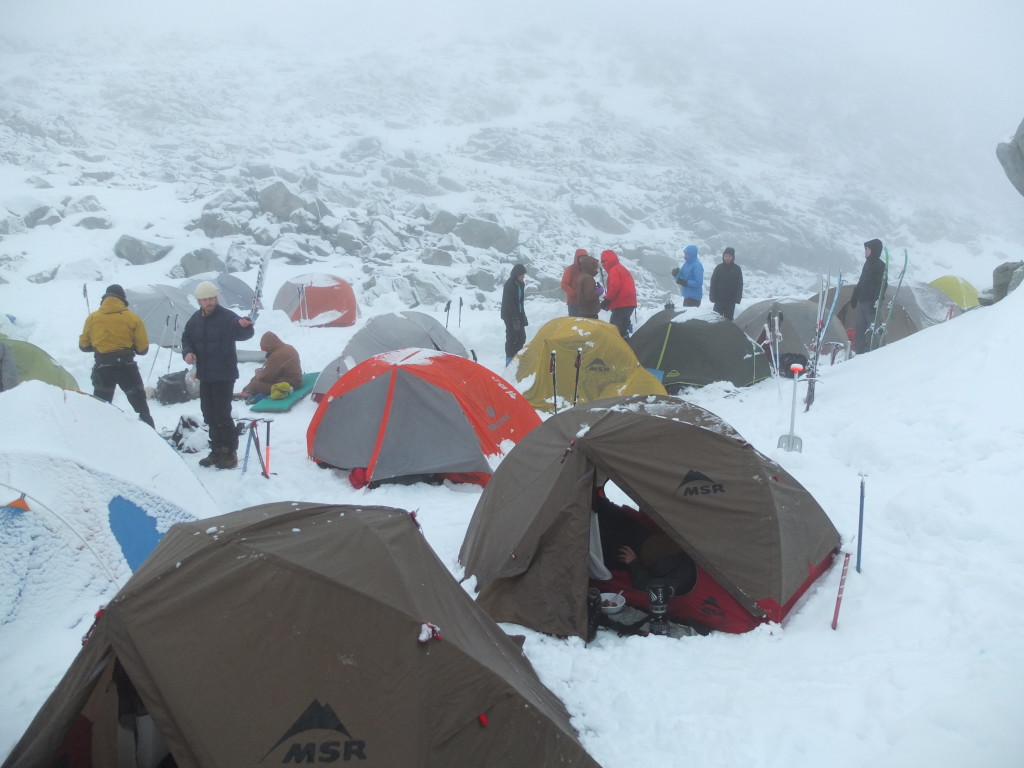 I had come to BC with a suitcase of mountaineering gear, but my warmest sleeping bag was only two seasons, and a British two season at that. My Ontarian flatmate took one look at it and said absolutely not, and gave me his. Rated to -18 degrees C and taking up a good 30L of my oversized pack, it was well worth it. I have never had a better night’s sleep in a tent in my life. I tried not to rub it in too much as I woke up totally refreshed the next day.

Porridge down us, tents packed up, we were off again. Down to the glacier just as snow turned to sleet. I was apprehensive as we roped up and took gentle steps onto the glacier. This was what we were here for.

From the top of the glacier, it looked to be one solid mass; a piste of grey extending to the bergschrunds either side. But once we zigzagged down it the crevasses became clear. Great caverns tinted blue, stones suspended like bubbles. It was September, so the avalanche probe wasn’t helping much, but we rehearsed poking the ground ahead of ourselves like intrepid insects. 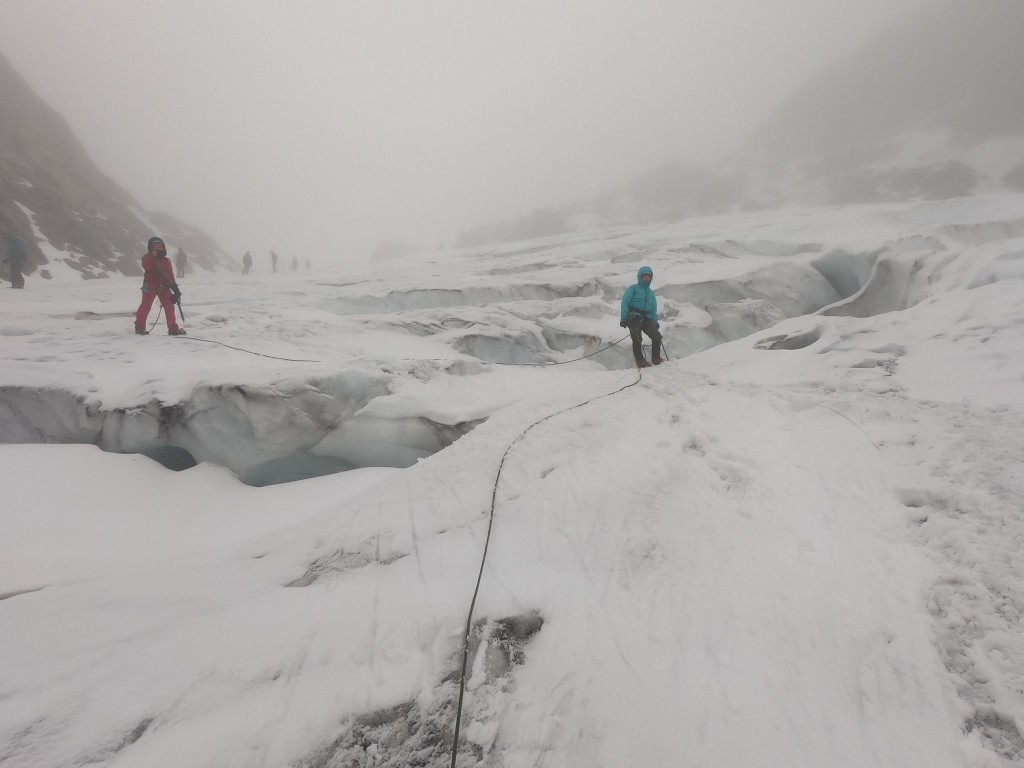 Dodge the crevasse is an easier game in September (Image: Selina) 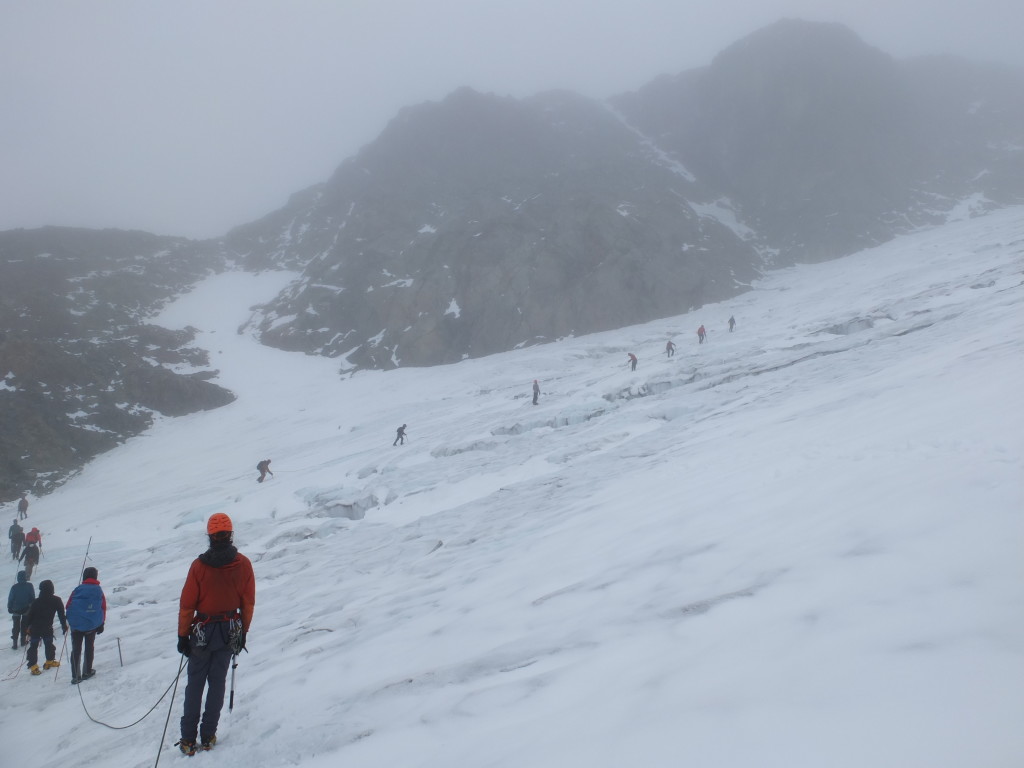 The traffic was glacial (Image: Ewan)

We reached the bottom of the glacier before turning around and working our way back up. I struggled to eat the remains of my now frozen baguette from the day before, and soon we were headed down and off the mountain. Our gaggle of VOCers spread into a long line through the afternoon, and eventually split apart. My group was certain we had taken a wrong turn, and began to panic, distressed at the thought of walking uphill again. In reality, we were about 50 metres up from the cars.

Glacier skills are fairly easy to learn, but harder to remember when your friend has fallen halfway down a crevasse. Like other mountaineering skills, and friendships, they require continuous maintenance to be as good as possible. But everyone has to start somewhere. The G1 trip was an excellent introduction to glaciers, the VOC, BC and Canada, and I can’t wait to do more. 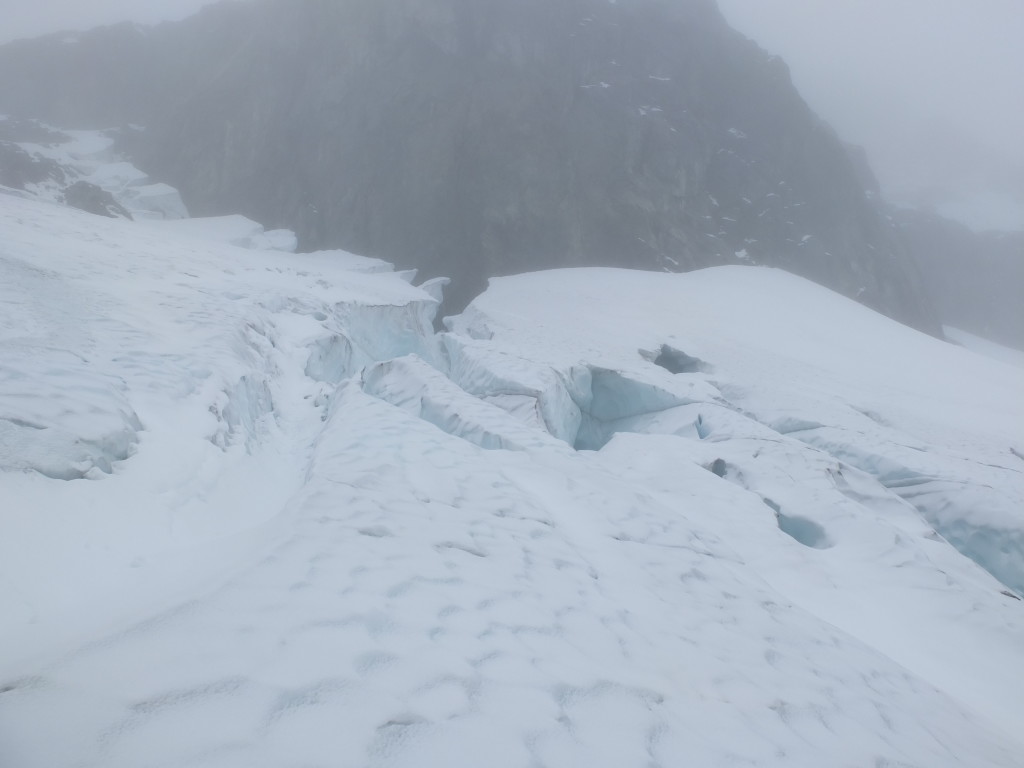