After partying relatively moderately the night before at the final hurrah of the Waldorf hotel I was a little saddened by my alarm going off at 6 to cue the beginnings of the Elfin Lakes Snowshoe Trip. Also, I was pretty sure I remembered that Spencer, my roommate, had told me the night before that he had the beginnings of the flu and was pulling out, so I was embarking on my first ever VOC trip with no dude partner. Bummer. My mood was instantly improved though when Emma pulled up at my door in her sweet ride ‘Thelma’ with a 90L pack in the back. I swear this pack was as heavy as everyone else’s combined and she is a mega trooper for hauling that monster up to Elfin, but she told me she would leave the hot tub and mini bar at home next time.

Me and Emma quickly located Sherry in the city and rendezvoused with the rest of the team in Squamish: Lia, Natalie and Cora (expert trip organizer).

The weather was inverted and beautifully warm, and hiking in the sun everyone quickly overheated and shed all layers. I think I wore my gloves and jacket for 15 minutes this entire weekend. They were doing an avalanche awareness weekend at Red Heather which is a pretty cool campaign to teach a lot of newbies (like me) avalanche safety. Seeing all of the traffic on the trail, we busted up to make sure we got spots to sleep in the cabin and were rewarded with bagging the final 6 beds. It was a pretty packed house, but with everyone being so friendly and spending most of their time outside, that wasn’t an issue. We arrived 3 hours and 40 minutes after leaving the parking lot, including a 20-30 minute lunch. Both skiers and snow shoers were the same pace pretty much the whole way.

The day ended with a small adventure to see the sunset half way to the Gargoyles and then a nice amount of partying in and around the cabin. The stars were epic. 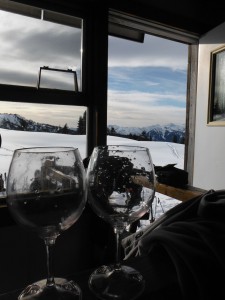 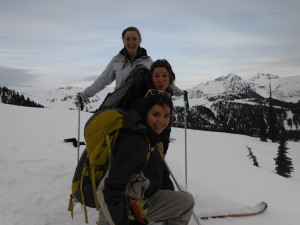 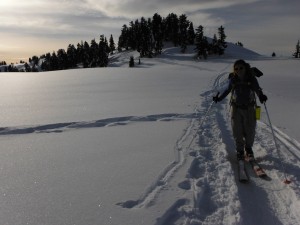 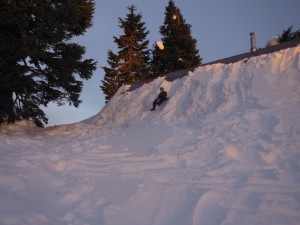 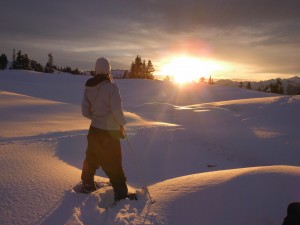 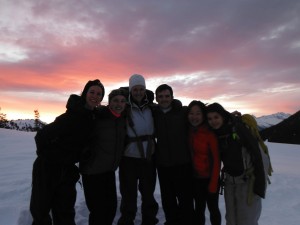 Me and Natalie vowed to hike the Gargoyles this morning, we had spotted the trail up on our sunset adventure the night before. Problem was is that everyone was planning to leave the cabin at 10 am to head down, and we were told the trip up to the Gargoyles was about 3 hours. I made a promise while drinking that I would set my alarm for 6 am and make this summit happen. Big thanks to the rest of the team for putting up with our side adventures and lending me the avi gear to make it safe.

So off we went from the cabin at about 6:45 after making a very quiet batch of oatmeal and trying not to step on all the bodies strewn all over the floor of the cabin. It slowly got lighter as we gained elevation and just as we gained the summit near the gargoyles the sun broke the mountains and lit up the peak, perfect timing.

The way back down was hilarious, Natalie has only skied for two months so good on her for being so badass and skiing (mostly falling) down the steep bowl back to the cabin. We met at the Red Heather cabin as the rest of the crew was getting ready to leave, so turned out to be good timing. Got back to the cars around 1 (less than 3 hours after leaving Elfin Shelter), and headed home where I slept for about 10 hours. I found spencer laying on the couch much improved from his sickness, and immediately showed him all the pictures so he would be super jealous, what friends are for right?

[Cora’s addition: Snow shoers can be just as capable and fast (or sometimes faster) as a beginner or intermediate skier, especially on the way up or over rolling sections of a route. The skiers were of course a bit faster from Red Heather to the parking lot, but only had to wait 10-15 minutes in the end for the first snow shoer to arrive after leaving Red Heather a little after the snow shoers.] 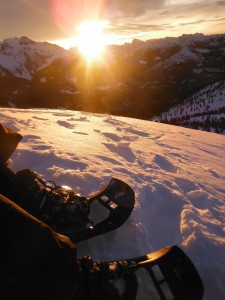 View from the gargoyles at sunrise

One Response to Tropical Snowshoe/Ski Trip to Elfin Lakes Resort