I joined a small group heading to the Seymour Demonstration Trail for my first official bike-hike. I like biking, and I like hiking, so it sounded like fun. The questionable weather forecast calling for rain left me wondering whether that would be type 1 or 2 fun. But as usual, my desire to get out into nature overpowered my mild allergy to rain. As someone who occasionally bikes 10km to UBC and back in a day, how hard could it be?

That morning, I crawled out of my bed to find the “flaming torch/cauldron thing” on the Kitsilano side of Burrard Bridge. I was the first one at the meeting point, and hoped I was at the right flaming thing. It turned out I was. One by one, a person clad in rain jacket rode up to join our group. We ended up with a cozy group of 5: Kasia, Else, Ayanna, Rachel, and myself.

So our group of 5 lovely young ladies hit the road. We decided to start along the seawall, since a few of us were slightly apprehensive about biking in crazy Vancouver traffic. Kasia was even able to provide some landmark facts along the way, such as why Lost Lagoon is called Lost Lagoon. A bike-hike plus mini city tour! Unfortunately, Rachel left us on the Stanley Park Causeway, since her borrowed mountain bike from a friend refused to change gears.

With 4 of us remaining, we biked across the Lion’s Gate towards North Vancouver. After that was the part I worried about – the real climb to Lynn Valley. At one point on the seemingly never-ending hill, my legs wanted me to stop more than anything. But we all managed to push through. We all commented that it was less difficult than expected. It’s funny how much easier biking uphill can be in a group. Must be the power of camaraderie!

At last, we made it to the Seymour Demonstration Forest. 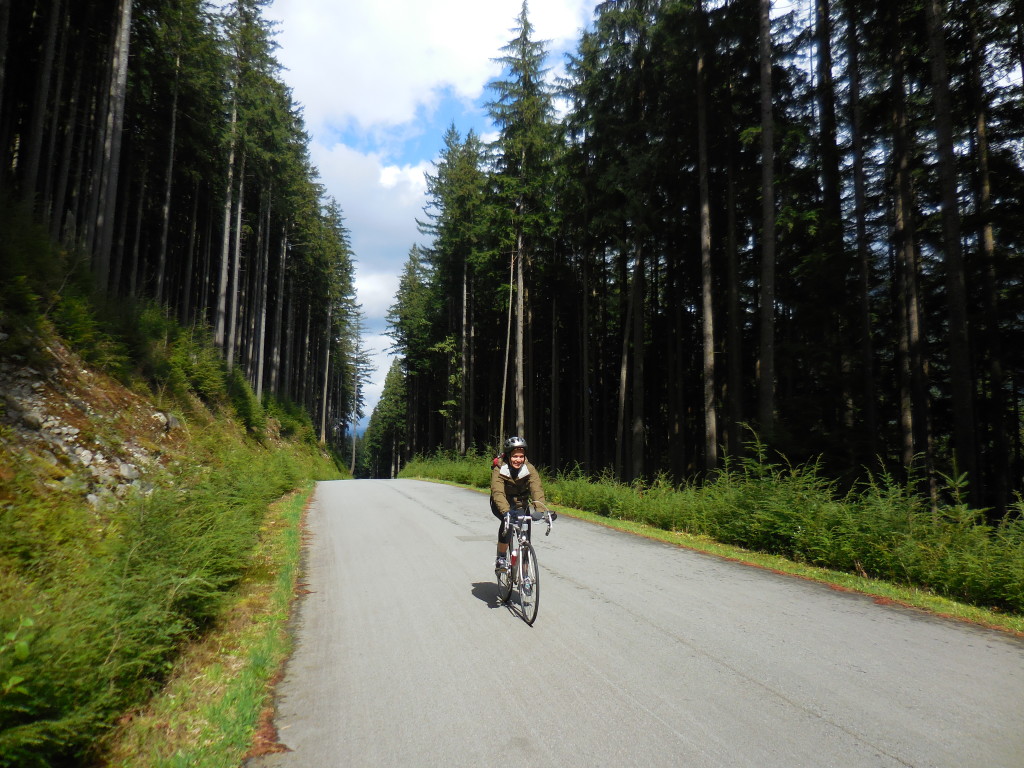 We biked along the paved trail surrounded by forest, with the occasional glimpse of snow dusted mountains shrouded by rolling clouds. Ah, this is what we biked through the city for.  At the end of the loop, we reached the Seymour Dam. A little down the trail was the Seymour Fish Hatchery, where we settled in for lunch and shared various baked goodies (yay carbs!). 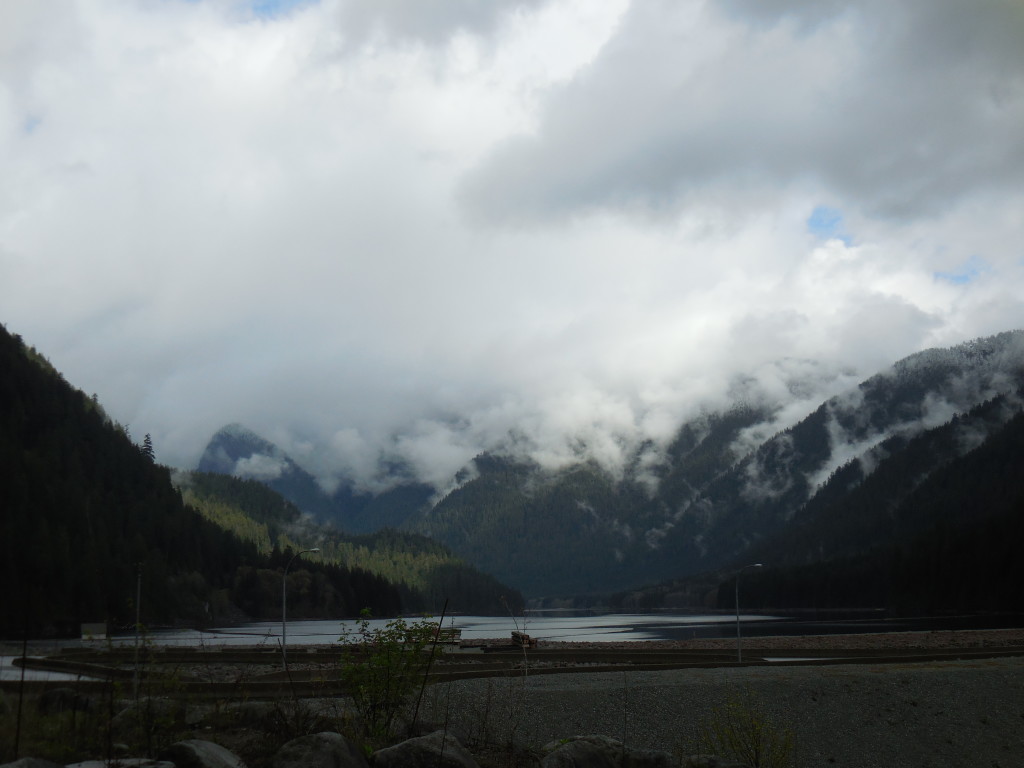 After being well fed, we biked along the Old Growth Trail. This was a gem of a path that made its way along a creek with majestic moss covered giants all around. We gradually made it back to the loop towards the trailhead, then merrily headed back towards the city. Kasia was even nice enough to accompany us on a different route back to Vancouver, even though her destination was in North Van. One by one, we split off at different points along the way, until it was just me biking on my lonesome home.

All in all, it was a great day with great fun. The weather gods were especially good to us, and the day was considerably dry with only a few raindrops. The trip was pretty mellow and relaxed (despite that last hill). What I enjoyed about the trip was that anyone could do it, even if they hadn’t biked a fair distance in forever. The bike-hike was more biking than hiking, but I guess that’s expected with only a day trip. A big thanks to Kasia for organizing the trip, and the rest of the group for being good company. Here’s to more bike(-hike) trips! 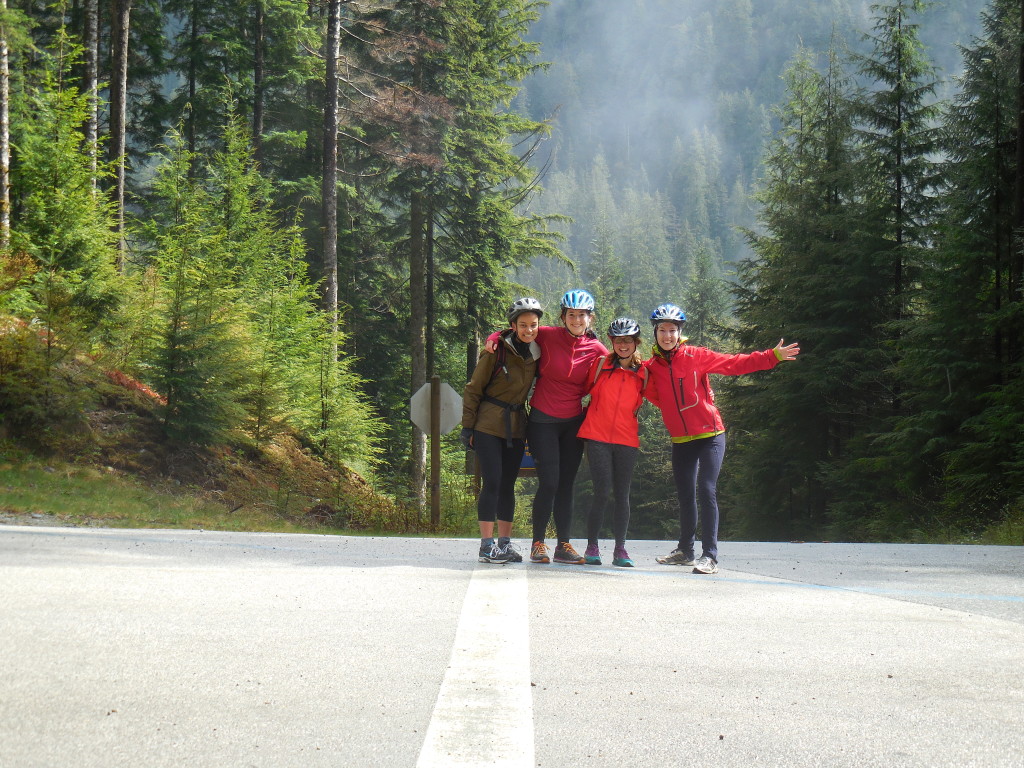