This years Lead Ladder was a huge success! Many thanks to all the instructors who dedicated their time and energy to help teach us all the techniques and tricks of trad climbing. A special thanks goes to Jon for putting together an impressive course and for annually taking the time to teach it to a new group of VOCers.

Here is a combination of trip reports from some of the LL participants. We all had a fantastic time and learned some very useful skills!

I revealed to my friends the dark purple bruises that lined by thighs, to which my friends asked, “Where did those bruises come from?”. I replied one word: “Skywalker”. Collectively the groups jaws drop and they ask “Luke????”. Why would Luke do this to me? Well, it was not Luke per say, but rather the 5-pitch climb in Squamish called “Skywalker” and I largely helped the incident along.

A group of 5 instructors and ~8 climbers embarked on a great journey to Squamish to put the skills to practice that we had learned in the 4 evening sessions leading up to this event (Lead Ladder). After trad leading at Sugarloaf on Saturday, the idea was to split up into groups of 2-3 (1-2 students plus an instructor) to do a multi-pitch climb. Because I have a fear of heights, I asked to be in the group that did the easiest objective. I also had almost attempted Skywalker a few times before and never succeeded on account of wet rock, so this seemed like the perfect opportunity! Aida (who also has a fear of trad climbing) became my partner in crime and Ted was our fearless leader (instructor). 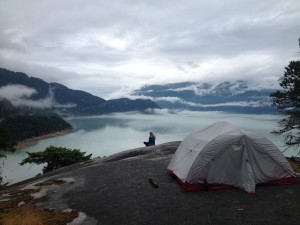 Cora contemplating the morning from the Malamute. Photo by Dylan Heerema

There was one unfortunate catch, however: after several weeks of drought and a heatwave, the rains finally decided to return to us. This was good news in terms of the forest fire epidemic that was occurring, but bad news for scared climbers like ourselves.

We walked to the base of Skywalker from the Chief Campground, enjoying our wonderful hike along the way. We arrived to find a dripping mess of a crack, which was the first 5.7 pitch of the climb. Aida and I looked at each other and said, “We are not leading that!” After some hesitation and indecision on whether to continue with the objective, Ted graciously led the first pitch, making it look easy but damp. After struggling up the first pitch (why was the rock like a mossy rock in a stream????), we made it to the first belay station victoriously and somewhat bashfully! I distinctly recall being asked, “Cora, is everything okay down there?”, to which I replied, “Yep! Just wet!”.

Aida and I looked up at the hardest, most intense pitch of the climb (the 5.8), which Ted also led on account of its moist and challenging nature. Aida then seconded the pitch like a pro, leaving supporting cams in place for Aid Climbing, which we both appreciated. After an immense break on account of rope FAFF, I (Cora) seconded (thirded?) on the second rope… this is where Luke beat the living daylights out of me! Dang you Luke! I attempted to layback the whole way on account of the extremely moist nature of the rock, and found my nut tool and 5+ cams digging relentlessly into my thigh. I tried to push them out of the way, but only made matters worse and enlarging the area of affliction. After a certain amount of extreme pain, my shoulder then gave out. At this point, I surrendered and let go of the rock…

Eventually I made it to the next belay station after I stopped trying to layback. Laybacking on the wet rock was foolish. Everything I did was foolish.

While Ted belayed Cora up the damp 5.8, I (Aida) started racking up in preparation for the following pitch. At this point, the rock was (thankfully) much drier, but as I was racking up, the raindrops started to grow in size, and my hesitation mounted. Once Cora made it to the belay station, I embarked on the 5.7, initially placing far too much protection, leaving myself with very few cams for the crux (whoops). I also ran out of draws (whoops x2). As I approached the crux, I frantically attempted to place my remaining cams to avoid injury if I were to fall. I paused, looked down, sought reassurance, and proceeded (with much hesitation) through the crux. I made it to the belay station, with very shaky legs, but was encouraged by the plaque, which read “May the Force be with you”. I set up an anchor to belay Ted, who seconded the pitch. Cora, made it up the pitch calmly and without hesitation. Meanwhile, I racked up to lead the 5.6 traverse (Skywalker!), which both Ted and I found to be much “friendlier”. By this time, I had learned a valuable lesson in spacing out protection.

I was comforted by Aida’s confidence on the 5.6, and thought “I can do this!”. Ted seconded the pitch and I was left alone at the belay station, waiting my turn. Shortly before I began to climb, a girl on a multipitch elsewhere released a blood-curdling screech as she fell (???), which did not offer me any comfort. (Apparently Aida thought it was me falling to my death.) I looked at what I had to do… first I had to release the anchor and climb up to the undercling for the traverse, and then traverse the undercling. If I fell before reaching the undercling, I had a nice, long swing on slab that would have been really hard to recover from. After a minor panic attack, I read the sign “May the Force be With You”. I thought “Screw you!” and then continued. I made it safely to the undercling, and then the traverse was super friendly and easy the whole way, much to my relief.

Then it was my turn to lead the last pitch: the 5.4! (I am hard core like that.) Aida and I spent the next 5 minutes while I racked up, and Ted kept asking, “Is everything okay down there?”. After taking ALL of the gear, I began to climb upwards on lead. I placed a cam on the first section, and then made it to the next ledge… to discover that the 5.4 was a slab sport pitch, where you could bear-walk up the whole thing. And I lead it like a pro… with a few pauses here and there due to weight drag (the rack was heavy!).

Aida seconded up, and we were done! We had made it despite the rain events! We then walked down to the base. To this day, we feel victorious and empowered. Maybe next time, I will do some real leading.

Thanks to all of the wonderful instructors over the weekend, and a particularly large thanks to Ted for his patience, understanding and encouragement during his mentorship. We couldn’t have done it without you! Literally…

I had some hesitation about signing up for the Lead Ladder trip, as I was a little more experienced than most other participants, but I had a keen desire to learn the finer details of hoisting, ascending and descending ropes, and escaping from the system. I had started to bring newer climbers on classics like Diedre earlier in the season, and realized that I was woefully ill-prepared for the various ways one’s day can be ruined when attempting big routes.

The Lead Ladder was an awesome opportunity for me to move beyond the dubious assumption that things would just “work out” on all my trips, and it was an opportunity to learn from the best. Over four weeknight sessions, we had some excellent training and practice on the finer points of prussiking, jugging, moving past knots, belaying, and hoisting. Great times were had and the group schemed their next climbing adventures over beers. 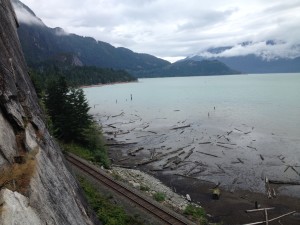 Climbing above the Sound. Photo by Dylan Heerema

Finally it was time to put our skills to the test, and head out for a weekend in Squamish, which was uncharacteristically damp after a drought-stricken few months (which, it must be said, had made for an amazing climbing season). I headed out the night before the big weekend with Cora and Ted, and attempted to flail on some V0s in the dark. We awoke to ocean views and low cloud at the beautiful campsite on the slabs of the Malamute.

Saturday was damp and drizzly, and the group broke off to practice gear placement and anchor building skills at Sugarloaf. After some practice runs, I decided it was time to sneak off for a quick romp up the nearby Thriller Off the Void before another squall set in. It was very enjoyable to watch the group practice their skills, and try some of their first gear leads! Ted and I ran into town in the hopes of acquiring glorious swag, as we had heard rumours of rather nice Arc’teryx mugs being given away at the climbing festival. Alas, we arrived too late. Nursing our disappointment over beers at the brewpub, the group split into teams of student and instructor and prepared for the next day’s adventure. 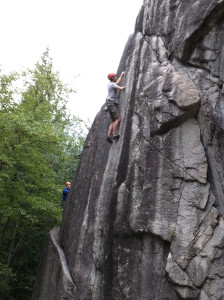 On Sunday I had the great pleasure of climbing with the legendary Jon Leighton, and we decided to seek out dry rock on the Malamute. Tackling some unfinished business first, we both arrived at the festival booths in time to snag our free mug. Then, starting from a scenic spot next to the Howe Sound, we climbed some excellent pitches including Old Style, Cider Crack, High Mountain Woody and Slap and Tickle. 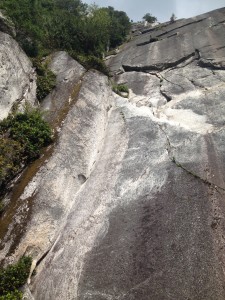 Aesthetic lines on the Malamute. Photo by Dylan Heerema

I was grateful for Jon’s lead on the latter, which was a classic Malamute sandbag and an awesome pitch featuring a thin traversing finger crack and a rather airy and stretchy foot match move. This section required some words of encouragement from Jon! We both thoroughly enjoyed the Top 100 moves on High Mountain Woody, and the sustained corner climbing on Old Style was perfect, perhaps an even better pitch in my mind. The less clean Cider Crack saw me pathetically flailing through a roof move and doubting the integrity of my gear. After all was said and done, a substantial amount of faffing with bushy rappels brought us back to the base of the wall.

Lead Ladder was an awesome experience and a much-needed bit of practice! A thousand thanks to the instructors for their time and patience: Ted, Christina, Yvan and especially Jon and Phil! You are all simply champions and I’m sure we’ll climb together again soon.