Josi was in VOC about four years ago, went on trips, and made some amazing VOC videos., which you can find here:

Recently she has been in Germany, making videos and messing with drones. This fall she’s going to Director School (in Germany), but she dropped into Vancouver for a few weeks this summer to do a bit of sailing, and we picked her up at YVR. She wanted to do some VOC trips; mentioned that she liked pools. I wanted to get to the Harrison Hut to check out a few things, and Carla thought it might be good. I advertised around for more people to fill the Jeep, but people were either weekend warriors, having to be in town to work, or else they had already committed to other trips, so in the end there was just the three of us.

We had several challenges to overcome. We had to somehow get past the ironman race in Pemberton, and avoid logging trucks going up and down the 4WD road. Despite getting trapped by traffic for an hour in the Pemberton Macdonald’s, we managed to arrive at the trail head at 8 pm Sunday, as planned.

We investigated the new logging. It’s still pretty raw up there and a temporary bypass trail gets you around the logging. Trail is not up to VOC trail standards. We encountered Lea Zhecheva, Ben Singleton-Polster, and Nick Matwyuk, who came crashing out of the woods, having just returned from the Meager Obelisk

via the Harrison Hut. 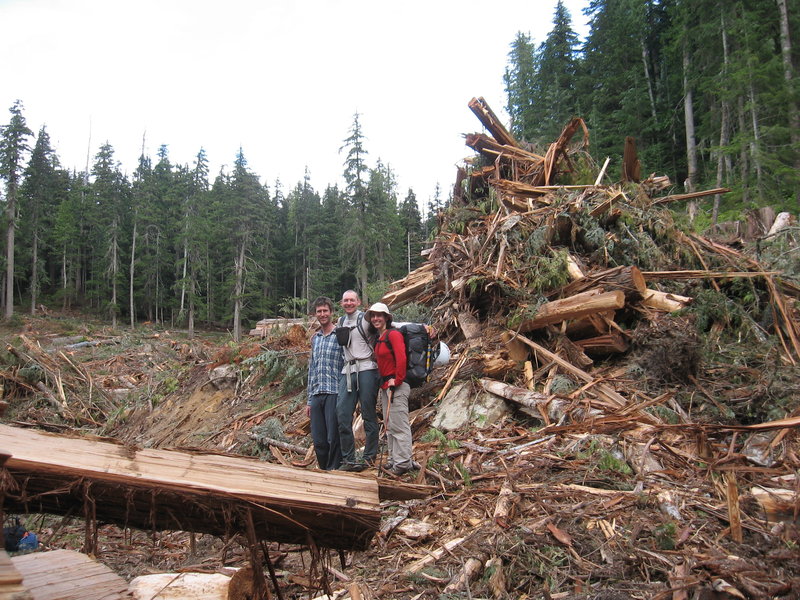 Ben, Nick, Lea on the way home from the Obelisk

The next problem, the scorching hot weather, we dealt with by starting up the trail at 6 am Monday. Considering the weather, we decided that the pools would be a good enough destination for Monday. We got there around noon.

This isn’t the ideal time of year for visiting pools. To fully appreciate them, you need colder air temperature. Arriving, we found we had the whole place to ourselves. I’m usually pretty shy, but with only we three beautiful people at the pools, there didn’t seem to be much to be shy about. After a suitable amount of time in the pools, we headed to bed early, again to beat the heat.

Roland, thinking about getting wet

Tuesday, early, we headed for the hut, with a single day pack which we took turns carrying. After climbing over numerous fallen logs, avoiding two black bear cubs in a tree, washing one person by accident in Pica Creek, crossing the excellent Barr Creek Bridge, and doing the Grouse Grind, we arrived at the Hut at 12:00. We took some measurements, then all three of us promptly fell asleep until 2:00pm, when we started back down in the hottest part of the day.

Note cunning capture of reflection of glacier on window. Chicken wire is OK. We found no marmots under the hut (Josi was disappointed). Floor needs 6 sheets of 3/4” full width flooring (not t&g), which will need to be somewhat cut to length up there and will weigh ca 450 pounds. In case we want to replace the door, RO is 34” x83”, with wall thickness 4 1/2” 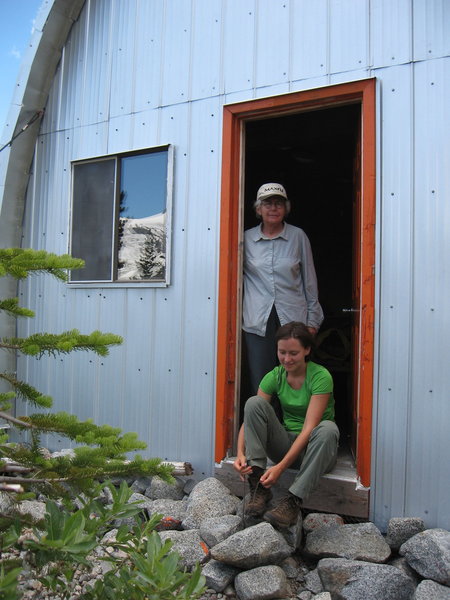 Arriving at the Harrison Hut, finally.

Got back to the camp at 6pm and found to our horror that there were three other people in camp, but they told us they were leaving at 4 am to get back in time for work (afternoon shift) at Whistler, so that was OK.

So, Wednesday, we once again had the pools to ourselves. We started out by trying to take pictures that were SFW (that means suitable for work, in case you didn’t know), but eventually got brave and decided to just let it all hang out. Josi is a professional photographer, and she even brought a waterproof camera in addition to the good one that she takes everywhere she goes.

My camera is not waterproof and I’m not professional, but it was all pretty gorgeous up there. Note wild and dangerous Meager Cr in the background.

Josi in pool #2, our favourite.

We got bored and decided it might be fun to cover ourselves with mud. As usual, Josi seemed to be prettier than me, but maybe that’s just my opinion.

Apparently in some parts of the world, mud baths are considered to be therapeutic.

Maybe I should have used more mud

We still had quite a lot of food so we thought that maybe a gourmet dining picture would work.

Eventually we had to go home. We left the pools at the hottest part of the day and probably drank four litres of water each on the way out. We encountered ten people heading for the pools. We drove down the logging road at 8pm and saw no logging trucks or other signs of life. Near Pemberton, we got a nail in a tire, and a crazy but nice guy stopped and offered to help us put on the spare. We headed to Macdonald’s for food and then to Nairn Falls Campsite where we were planning to spend some real money ($22) camping, but Nairn was full so we stayed in our favourite ninja camp-site for free. Thursday we drove home. 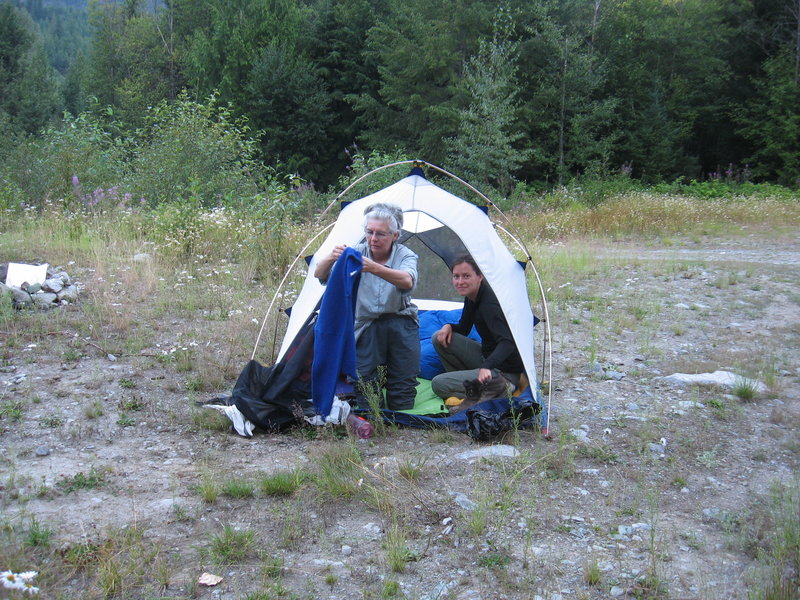 Ninja camping at the place of the dead TV set

This started out as a trip where we were going to discuss what we ate each day, sort of a guide for people who don’t know what food to take camping, but it morphed into a photo shoot. Josi was extremely happy with it. Carla was mostly happy, though she doesn’t much like pools, or bear cubs, or the long trail to the Hut, or hot weather. For me, it was all I had hoped for, and more.

If you want to do this trip, here’s some suggestions: