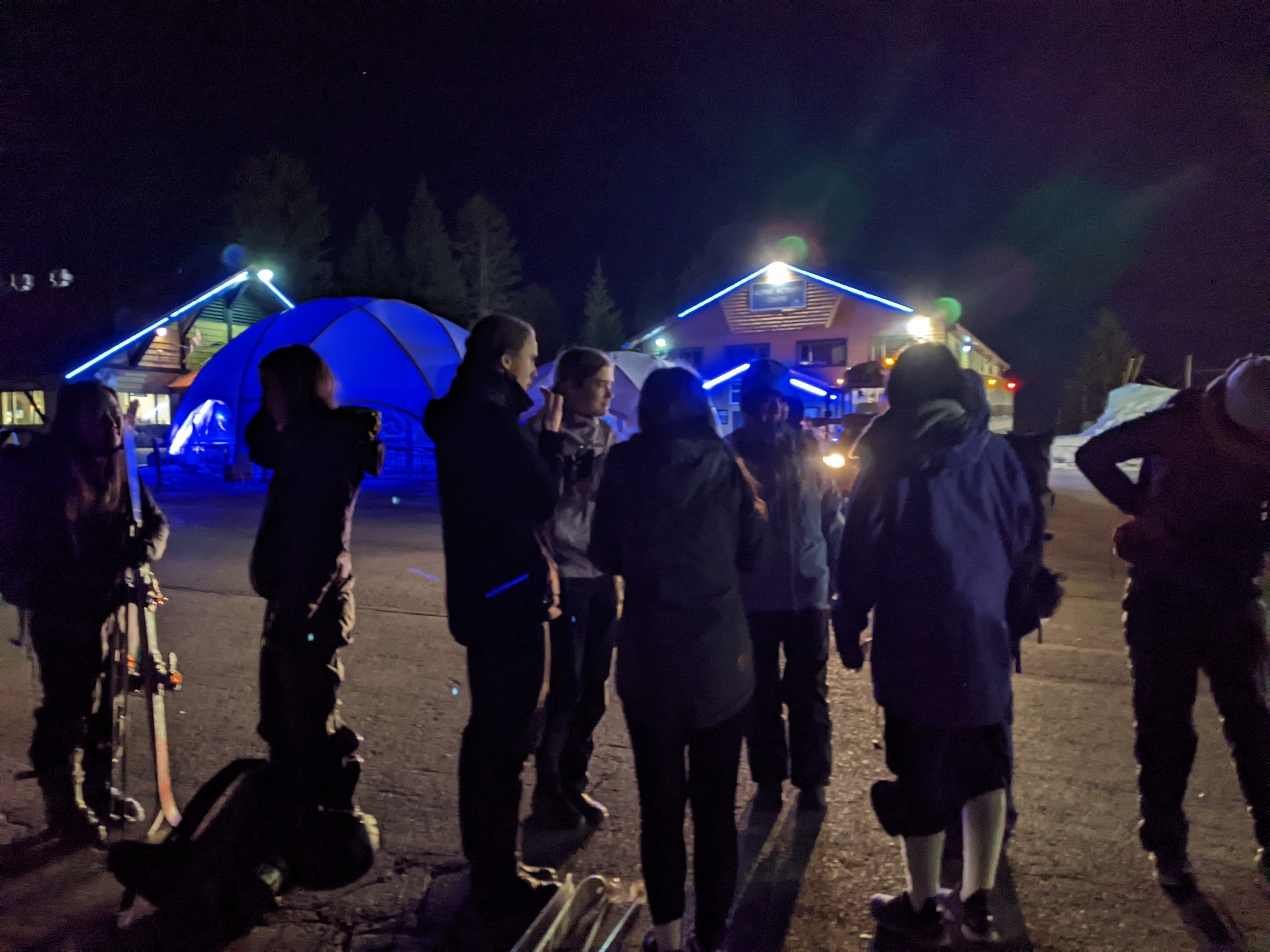 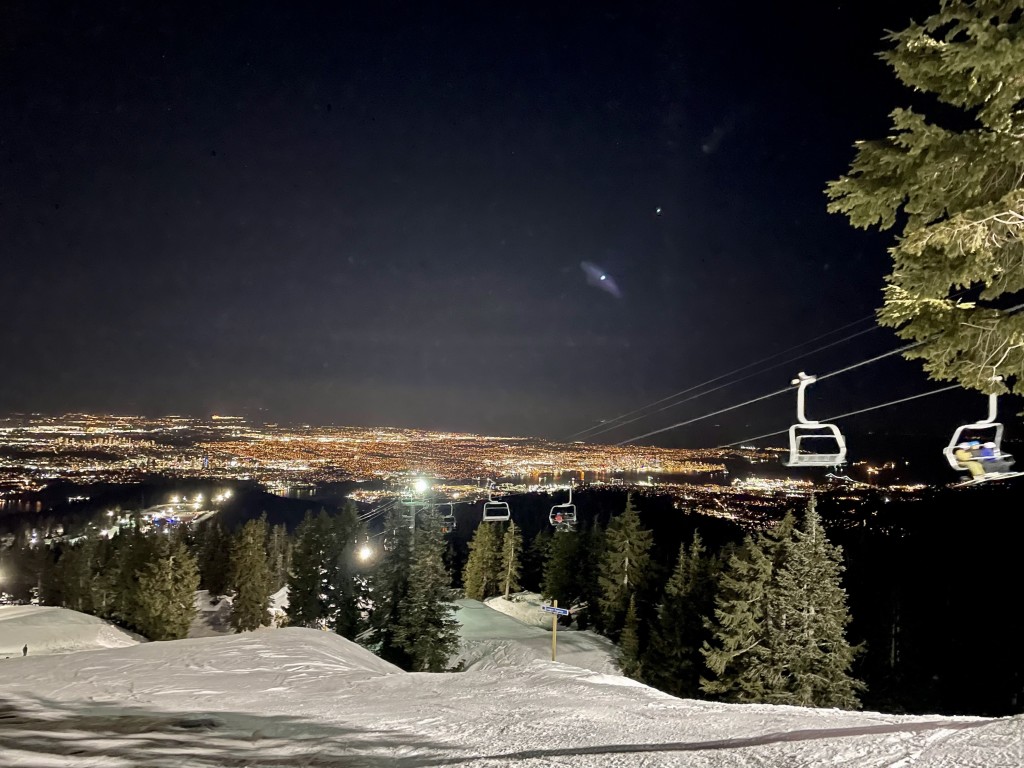 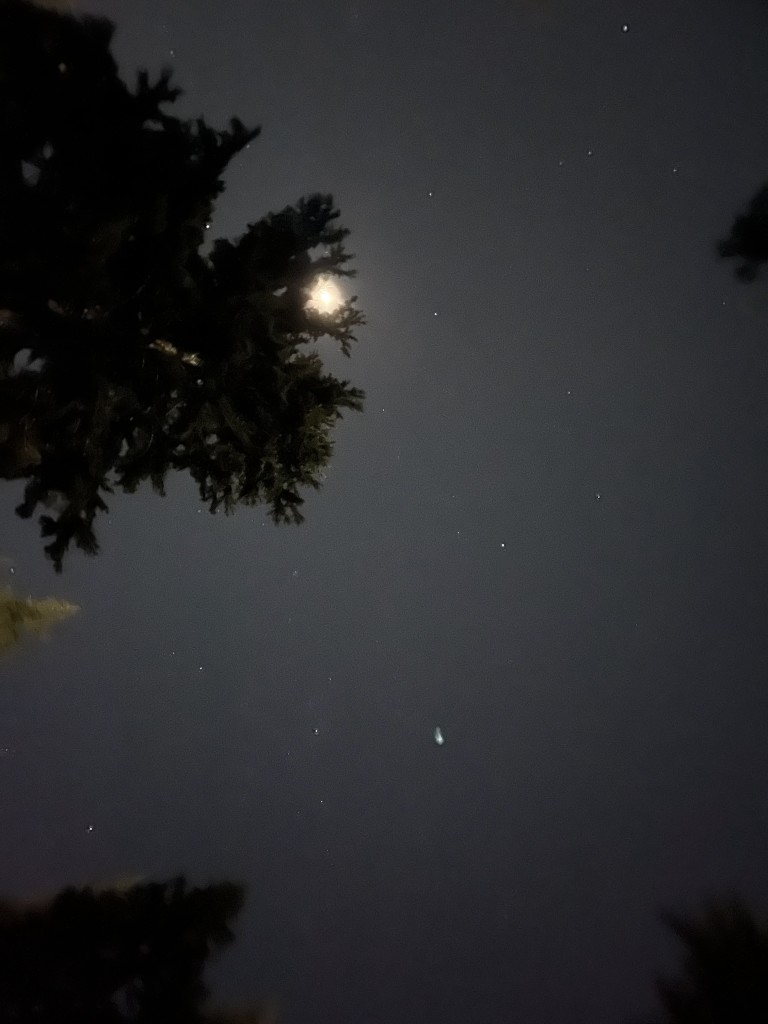 When I first saw the “Ladies Night at Seymour [Beginner Friendly, learn to ski!, helpers needed (workhike)]” trip posting on the VOC website, I jumped at the chance for a beginner, women, and LGBTQ+ friendly ski trip.  After living here for eight months, I was impatient to finally get out there and experience the famous ‘natural side’ of Vancouver (besides the rain).  Did I know what ski touring was?  Not really.  Did the idea of hiking up a mountain in the dark faze me?  Probably not enough.  Did I know the difference between AT, tele, and downhill skis?  I didn’t know there were any.  I signed myself up without another thought.

Come Wednesday afternoon, I was on my way to Mount Seymour with Kiran, the kind owner of a magical car which somehow swallowed all our gear, Emily, a friendly psychology major, and Julia, a well-travelled exchange student.  We made a few wrong turns along the way, but we got to know each other a bit and arrived at Seymour at 6:30pm.  This trip was divided into two groups: some signed up to learn resort skiing, the others ski touring.  While Emily cheerfully grabbed her snowboard and went off to meet her friend on the resort slopes, Julia, Kiran, and I shrugged on our packs and walked to the trailhead, our boots clicking against the concrete.  As the sunlight dwindled to nothingness, the uncertainty of what lay ahead suddenly struck me.  It was probably a bit too late to bail though, considering we were already on the mountain.  We walked on.

Despite the cold, I immediately felt warm on the trail and tried to get the hang of skinning (as a mediocre downhill skier, I struggled to make my brain understand that having my skis pointed uphill did not mean impending doom and pain).  With a few handy tips from experienced tourers and a literal step up from my heel lifters, however, I made progress.  For a while, I enjoyed the sound of snow scraping against my skis and the pleasant ache of mild exertion.

Then we hit an especially steep and icy slope.  Knowing it would likely test the limit of our much-(pre)loved VOC skins, most people stepped out of their bindings and gathered up their poles.  For the next ten minutes, I felt (and probably looked) as elegant as an ogre in high heels clutching my bundle of skis, my boots scrabbling to find purchase on the icy slope.  Each jut of ice glistened malevolently in the dark, and each step felt more like a fall forward than walking.  I somehow made it through two or three more of these climbs without tripping too badly.  Around me, several gods in human form casually trekked up with their skis on.  By now, I had joined a group of five or six people who patiently waited as I huffed my way up, the other intrepid skiers having gone ahead or bailed.

A few minutes away from Brockton point, I clicked off my headlamp, forgot the ache in my calves, and simply looked up.  Above me, the stars were points of light pin-pricking through the blue tapestry of the night.  Behind me, a sea of orange lights shimmered between the mountains.  I watched it all for a while—all those stars and buildings and people—trying to find a pattern among the rippling lights.  Of course, there were none to be found, but for a moment I felt like if I just looked hard enough, I would see the pulse of the city.  In that instant, I felt immensely grateful for all the people who had gotten me to this point, from the organisers and drivers to the more experienced skiers’ invaluable advice and blatantly optimistic lies (“Just a little farther!”).  As a total greenhorn, I knew all my skidding and slipping around on the ice-studded slopes cost my group time, but still they waited for me with good humour and encouragement.

I eventually resumed the trudge up Mount Seymour, the ice crunching under my skins, the golden vista receding from sight as the mountains once again swallowed the city.  Twenty minutes later, we rejoined the resort slope and skied our way down.  Ice cream treats and the warm company of other VOCers awaited us at the bottom of the hill.  For those last few minutes on the mountain, I felt like a ghost flitting through the almost deserted slopes, alone except for the orange light pooling on the snow, the reflective backing of a skier just out of sight, and the wind keening past my ears. 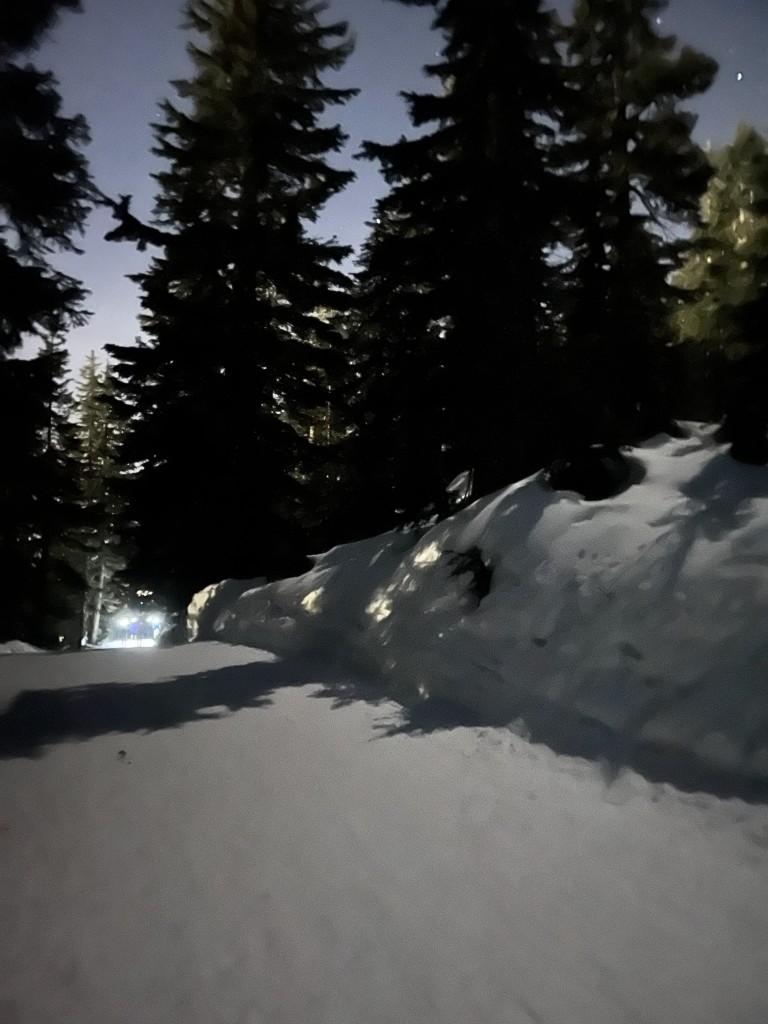 Ski touring trail. Very icy due to the melt-freeze crust persistent on the North Shore during our trip. (Photo by Emma-Sofie Hestbech) 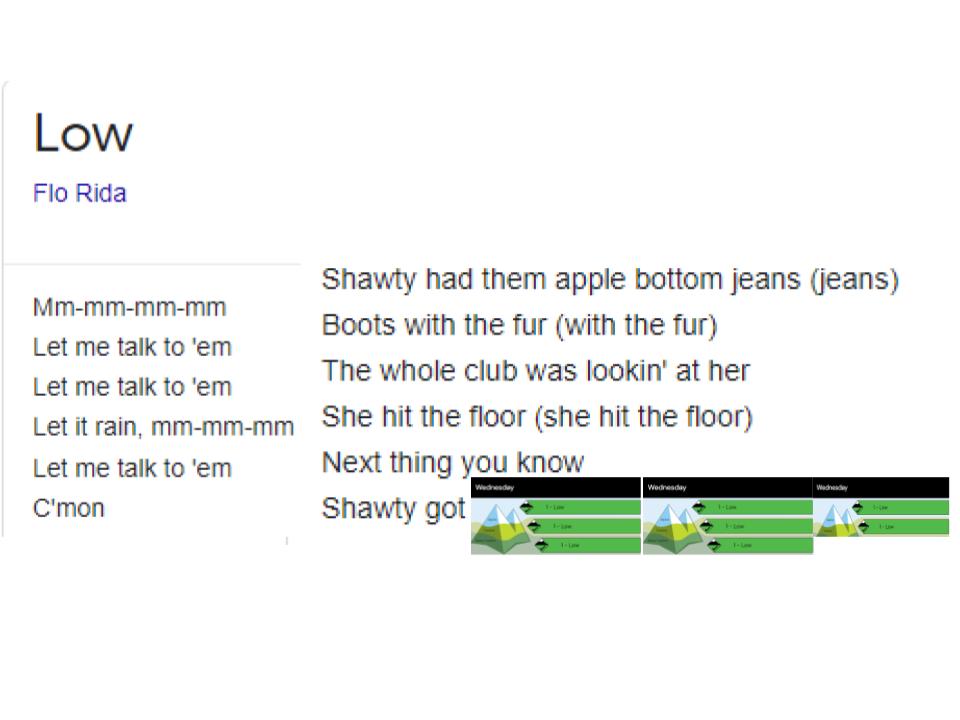 A meme based on the day’s unusually low avalanche conditions. In fact, no avalanche problems were listed for the day. (Photo by Emily Wood)

As someone with only 3 hours previous ski experience (indoors) and no idea how resorts actually worked, but being desperate to get out on the slopes before the season ended, this trip was an absolute godsend. I got to learn how to navigate chair lifts/outdoor ski runs whilst being shepherded around by someone who actually knew how it all worked and had 4 hours of ski tuition from an excellent instructor – all without having to stress about organising anything myself. Thanks so much to Melissa and co for taking on that burden! And an extra big thank you to Kyra for the incredible amount of patience combined with great ski tips you gave us on the slopes (and for the history lessons on the way back)! As a newbie skier + exchange student this trip provided the perfect combination of learning safely whilst also making new friends. Despite feeling like I spent the whole evening getting beaten up (after the 10th time falling over it does start to hurt), when I finally made it down a green run without falling over for the first time I knew I would be back as soon as possible to feel that thrill again. And the feeling of getting to the bottom of that green was made even better by the cheers from the other ladies in my group when I reached the end. Roll on the next trip! 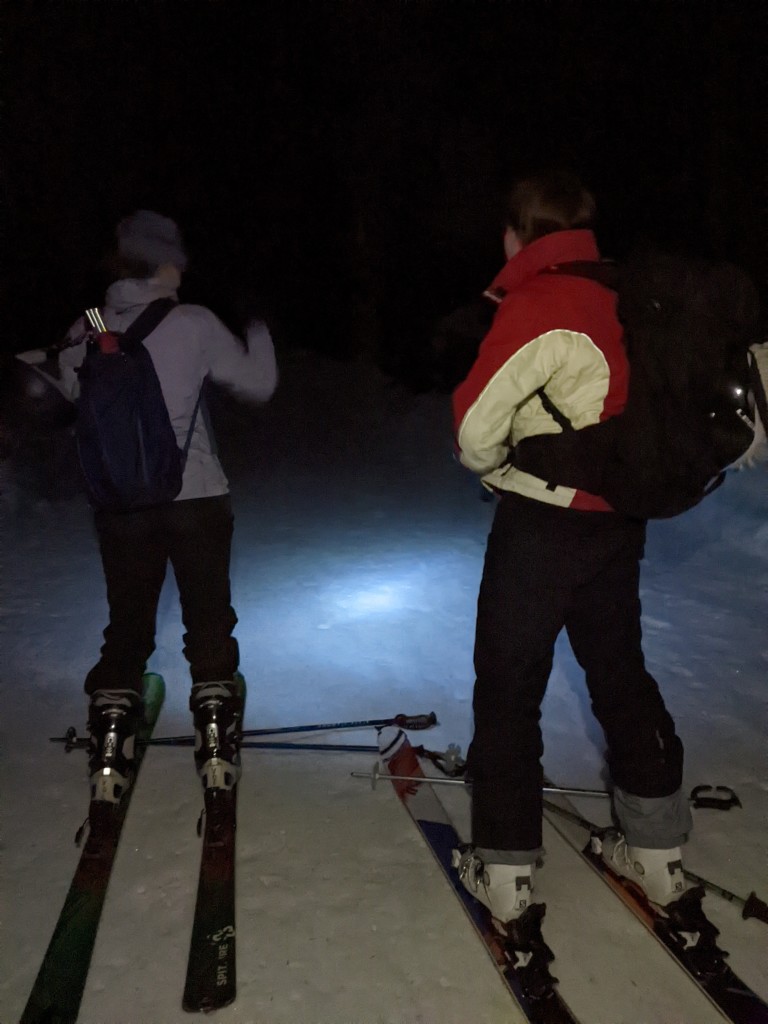 I wasn’t sure exactly what I was getting into when Melissa roped me into signing up to teach a group of new skiers at the resort, but I was surprised at just how rewarding an experience it was!  I basically went into full Coach Mode, and I’m very glad that my group found it helpful rather than annoying!  The blue bird day which turned into a lovely sunset, and then skiing above a twinkling city was a super cool experience.  I had been stuck hunched over a desk with a ton of work before that night, and I had so much fun getting out on the slopes that I had a ton of enthusiastic energy until I finally collapsed into bed that night!  So a big thank you to Melissa for her amazing organizational and wrangling skills for such a huge group!  Also, thanks to the girls I taught for being such a great group and persisting despite all the falls and tumbles! 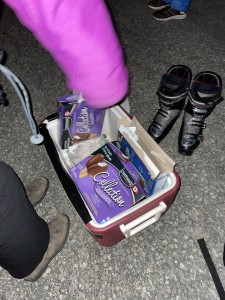 I have this rule or guideline or really aspiration to spend less time planning for a trip than actually going on the trip. It usually doesn’t work out that way for a few reasons: I think a lot, I choose big trips aka big faff trips, and I don’t delegate responsibility as much as I should. This trip I did better on #3, but #1 and #2 didn’t matter when I saw everyone’s smiles at the parking lot after the ladies* Seymour trip. I left UBC at 5 with an Evo full of ladies and only ⅗ skis fitting in the Evo ski rack. Thankfully, Morgan Cooper came to the rescue and took two skis and most of our stuff. She also had the refrigerated treasure box *suspense*.

Faff happened and a reasonable amount of chaos including swapping multiple pairs of skins, and at 730pm I started up the skin-track with first time ski-tourers Jenna Foster and Katrina Lang as well as awesome skier, teacher, and person MJ Weir Weiss. After learning how to use heel risers, we were cruising! At a steep section, I took a tumble and had a fun slide down one of the many butt-paths on the trail (trip idea – hike to Brockton Point or Pump Peak and butt slide down – it might be more fun than skiing!).

My group turned off half-way up and transitioned. A middle aged man was taking his father out for his first time ski touring. We enjoyed some pleasant words of encouragement as we transitioned together. He was having a great first time and he hadn’t even gone downhill yet!

My group got down to the trailhead and I went right to the car to unpack the treasure box of goodies – ice cream bars! Folks trickled down, enjoyed a cold treat on a very cold night (I’ve camped at Seymour 3 times and this evening was colder than any of my nights camping), and then headed out in our respective cars.

Thanks to all the drivers and helpers who made this trip happen! I got some valuable feedback after the trip of remembering the objective is less to get a lap in and more to learn how to ski tour – including how to put on skins

I was so caught up in the logistical chaos that was this trip, that I forgot the main purpose – to teach people the basics – and getting a lap in would be an added bonus. But everyone seemed to say they overall enjoyed it and learned from the helpers and can’t wait to try again

For those wanting to lead a trip like this in the future, I would say to delegate responsibility onto drivers and helpers as much as possible and to even outline a list of concepts to talk over (kinda like glacier school manual table of contents) so that knowledge can be shared as much as possible. I look forward to helping to organize/lead more trips in the future, probably in a smaller capacity next time.

In all, getting more people stoked about outdoorsy things, especially those that don’t feel comfortable due to systemic barriers, makes my heart so full! To more folks on skis!

2 Responses to Ladies* Night at Seymour: A collaborative trip report