Girlz Ski Gin: Narrowly avoiding disaster while everyone else has a lovely time

That morning as I drove up the Sea to Sky, my car packed with skis and a couple other ladies, I breathed some sighs of relief as I enjoyed the view and blasted some road trip tunes.  I thought that my worries were over: I had picked up my car from the shop just in time the day before (my pick up time kept getting pushed back and I got lost trying to find the shop in the pouring rain), and we weren’t running late (at least not that late).  However, despite the beautiful weather and my sunny disposition as the trip began, it turns out that I was terribly wrong in that belief.

After plenty of email faff and some last-minute changes in plan, a group of 3 carloads worth of VOC ladies were heading out to Hanging Lake and Gin Peak to ski for the day. This location is on the lands of the Skwxwú7mesh-ulh Temíx̱w (Squamish), Lil’wat, and St̓át̓imc Tmicw (St’at’imc) peoples, and I’m so thankful to be a visitor on their beautiful land (https://native-land.ca/).

As we approached the turnoff to the Callaghan Valley, I missed it because I was too busy talking. I tried taking the road off the next exit, which Google Maps assured me I could use to connect back up to where I needed to go.  Instead, it brought us to the snowmobile parking area, which was explained to me by an attendant who was confused by my questions about a VOC trip.  We turned the car around and trundled back down the pothole-filled road, and made our way over to the proper parking lot where the other ladies were waiting, not too long after the agreed-upon meeting time. 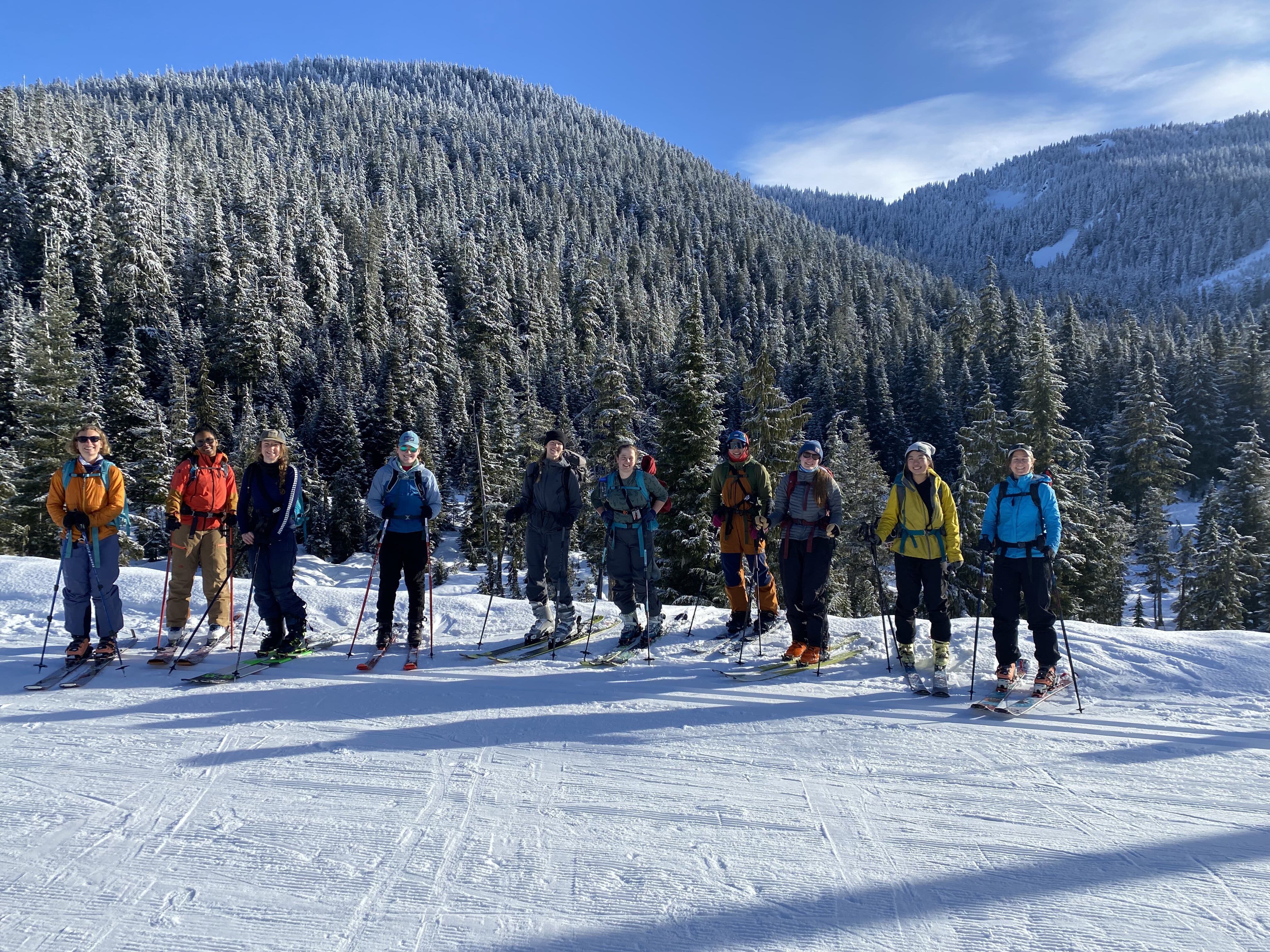 After the prerequisite faffing and beacon checks, we headed off and up the most horrendously icy skin track I have ever encountered (and I’ve been up my fair share of icy skin tracks!).  I ended up in front, slipping and sliding all the way as I tried to lead our now spaced-out group.  There were dramatic backwards slides, topples, and exasperated sighs as we kept on encountering sections that seemed even icier and steeper than the last.  There were at least a couple times that I relented, taking off my skis and hiking, desperately wishing for ski crampons.

It all became worth it though, when I finally emerged from the trees into a beautiful open field of snow that blanketed Hanging Lake.  Fluffy, fresh powder was perched upon the trees and rocks that populated the slopes rising up above the lake.  There was hardly a cloud in the brilliantly blue sky, and sunshine shone down upon us – the perfect bluebird day!  Bree and I plopped down on top of one of the fluffy powder pillows on the far side of the lake, and we drank in the sun while we waited for the other gals.  As the others showed up they marveled at the beautiful weather and surroundings as they joined us in sitting down and eating lunch, however that joy was soon dampened as clouds rolled in and stole our sunny rays.  We also met a dog, which was of course, absolutely lovely. 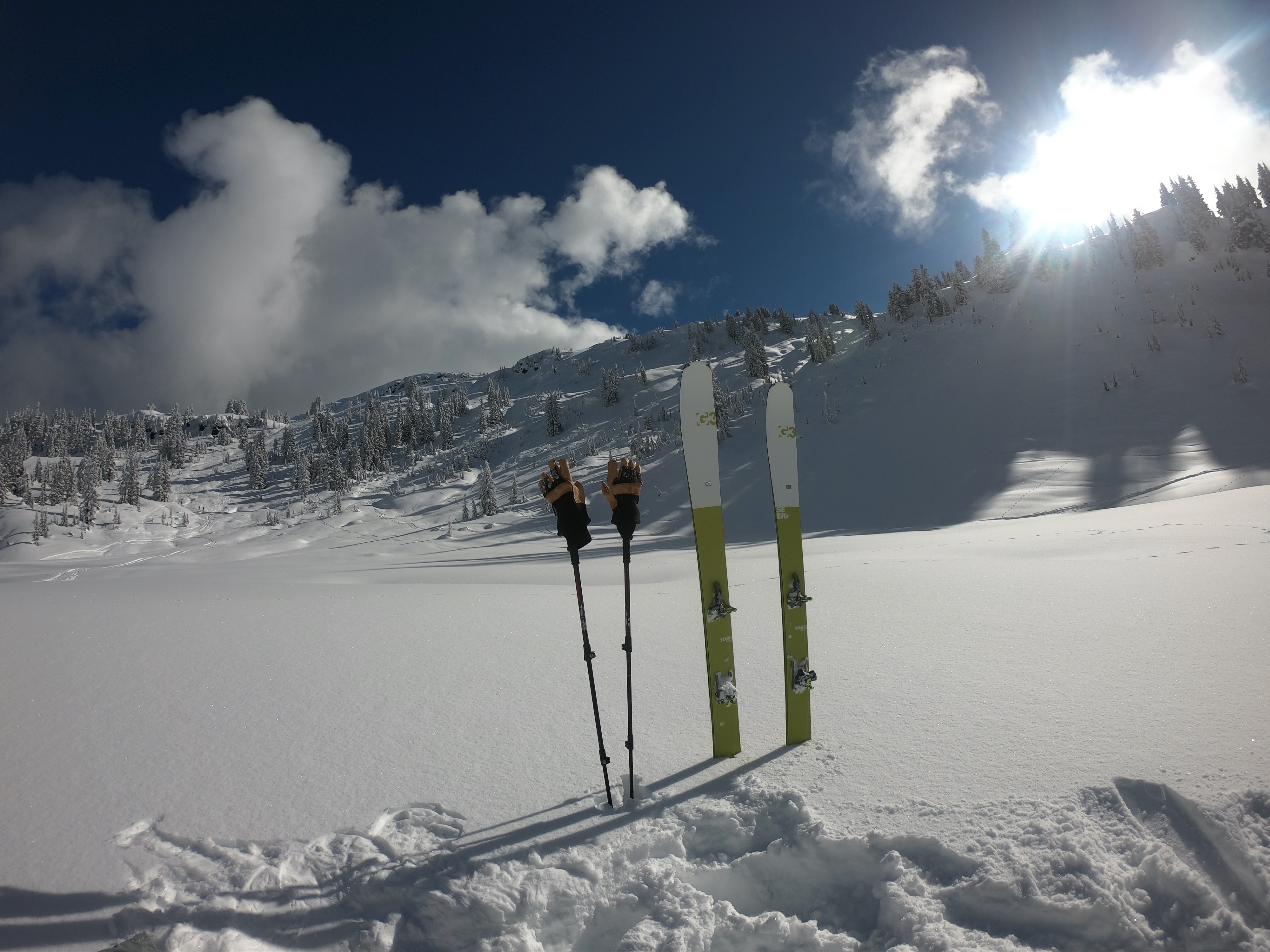 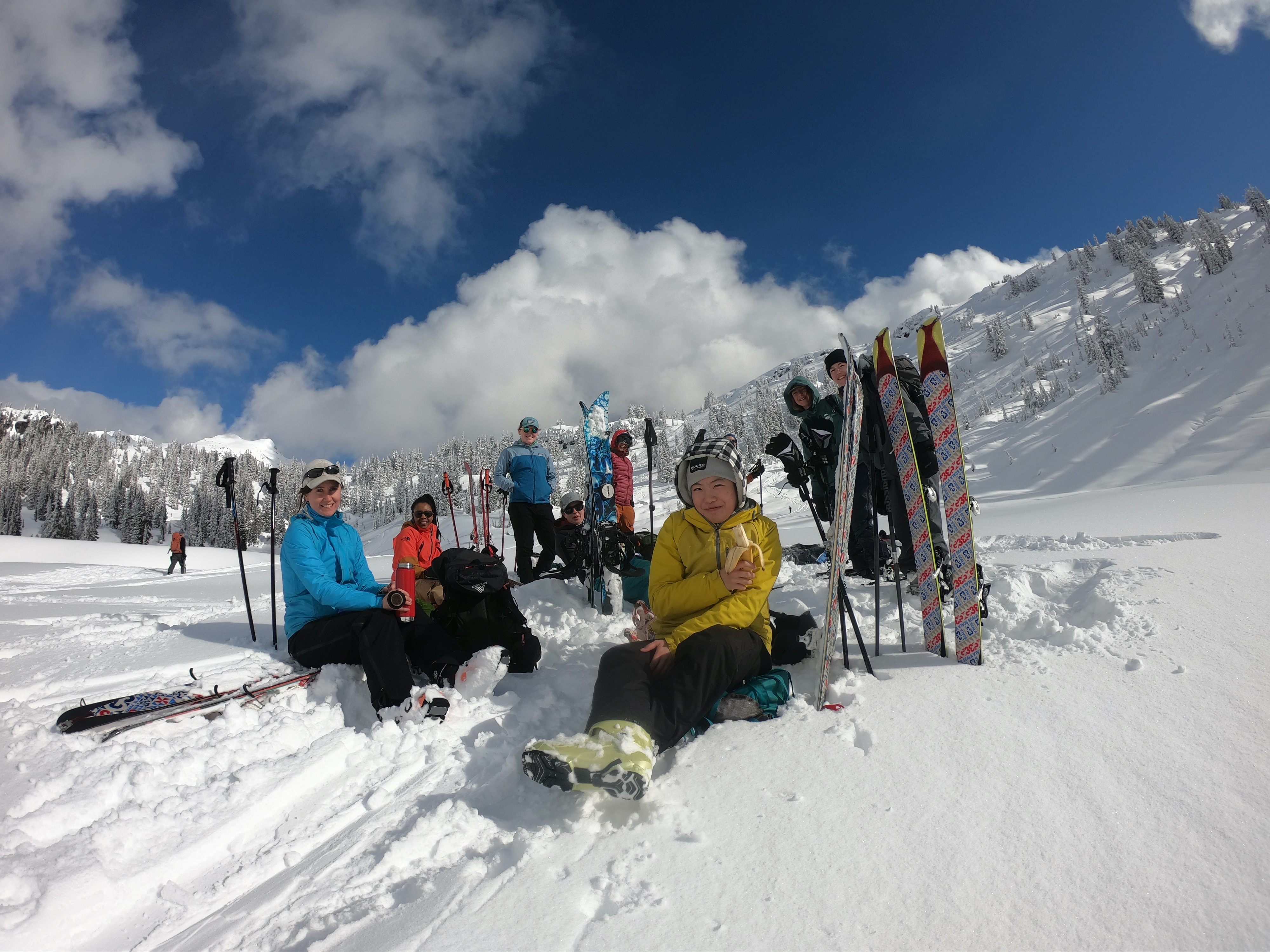 The group at Hanging Lake – photo by Kyra Przybylski

After the dog was pet and lunches were eaten, we split into two groups: one group staying to ski the mellower slopes around the lake, and the other to summit and ski down Gin Peak.  I went along with the summit-seeking group, and as soon as we made it above the slopes of Hanging Lake and into the rolling meadows of pristine snow, a sudden snow squall hit!  Undeterred, we headed onwards up Gin, and I layered up.  Soon afterwards, as I struggled up the last push to the summit, I regretted my extra layers, as the snow squall ended as quickly as it began and the sun reemerged. 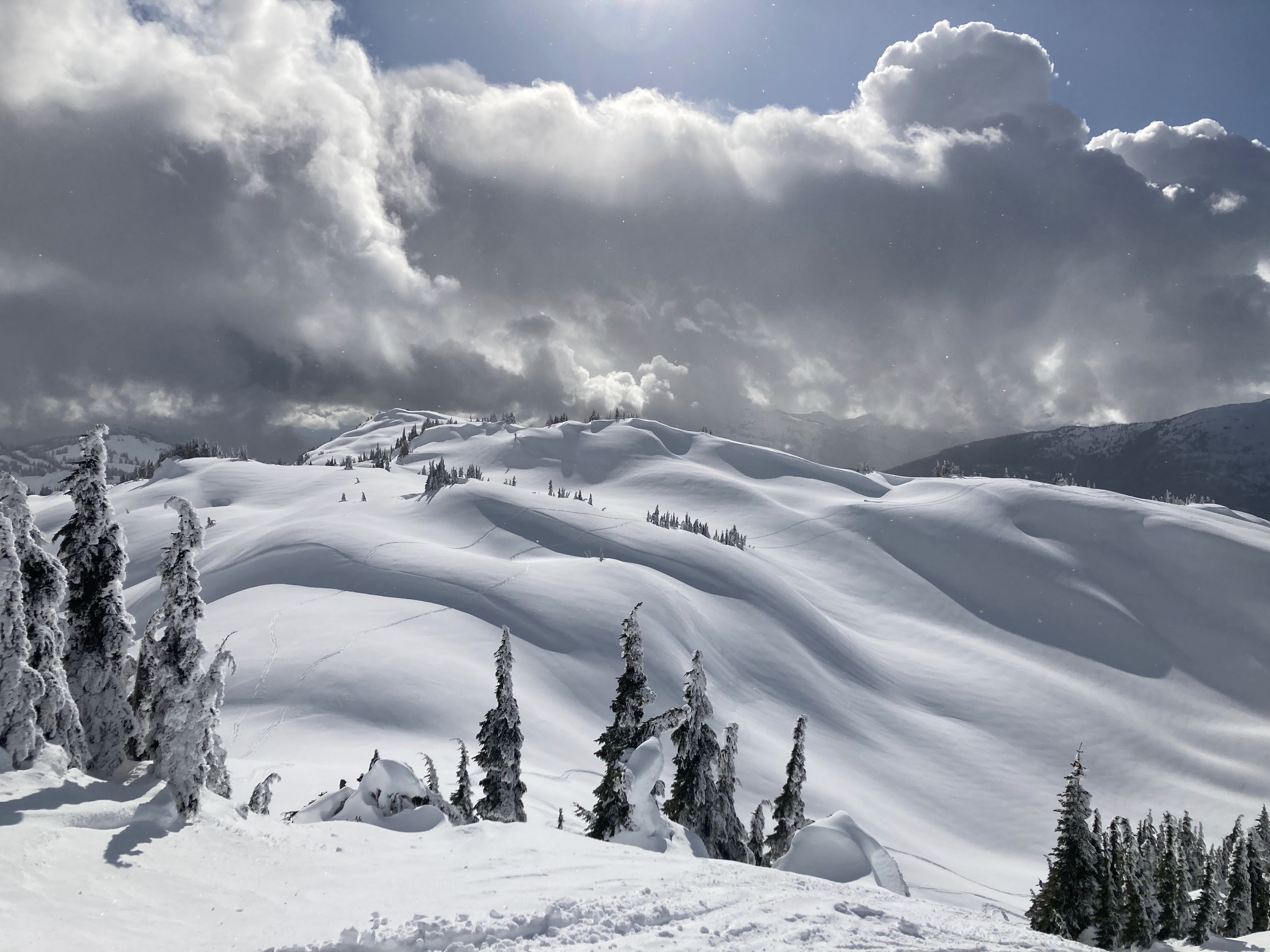 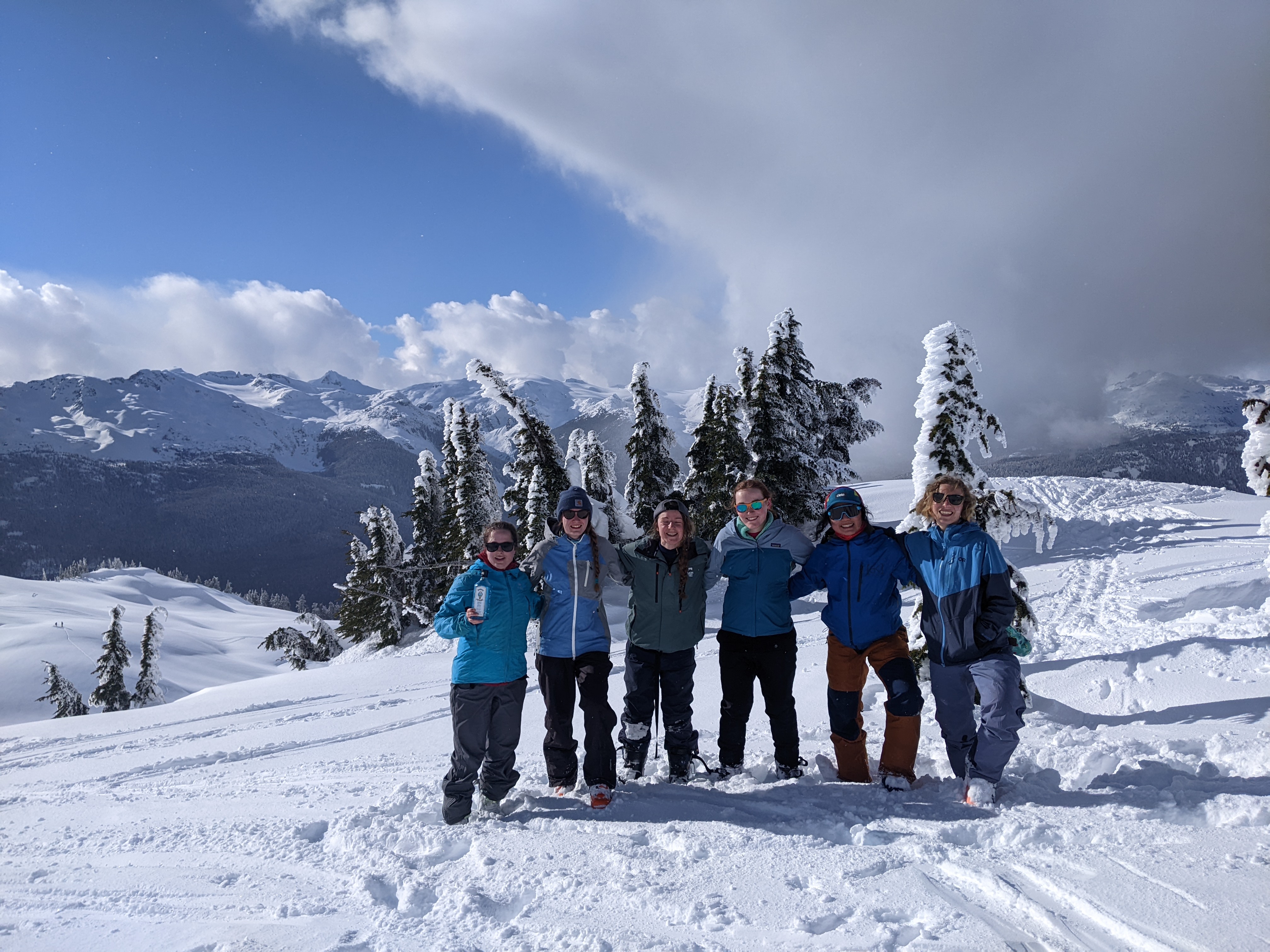 Atop Gin Peak there were lots of yips and hollers, posing for pictures, and some swigs from a bottle of gin that Melissa hauled up there (Get it? Gin on Gin Peak??).  And so it was time to descend.  Spirits were high, and I split off as I followed tracks further to the right through some steeper gladed terrain, keeping in mind that I’d have to traverse back in the skier’s left direction to make it around some cliffs I had scoped out from below.  The terrain was sick, and I had a smile plastered on my face, until I realized that the tracks I was following were heading further right than I wanted to go, so I hung a sharp left sneaking through the trees.  My stomach dropped as I hit the edge of the cliff, which continued upwards, cutting off my exit.  Oh well, I could just head back to the right, going around the large cliffs on the opposite side.  I made a sketchy turn on the steep slope and headed back the other way, until it happened again – I met the cliff as it continued from below me and upwards to the right.  I had gotten stuck right in the middle of the cliff band in my attempt to avoid doing just that.  I was cliffed out.

For a minute I just stood there, considering my options.  I could try to huck it down a very steep chute, but they were all scattered with small trees and I’d probably end up skewering myself, or crumpling as I hit the gentler slope below the cliff.  I managed to get the attention of some of the other girls, who had already skied down from the peak and luckily spotted me up in my perch.  They were able to yell up to me and confirm what I had feared: my only way out was to hike back up.

Less than a meter above the (in my opinion) pretty significant cliff, I carefully and fearfully took off my skis and strapped them into an A-frame on my pack, worried the entire time I was going to drop a piece of gear over the cliff’s edge.  Then I turned around and found myself climbing back up the slope on my hands and knees, not by choice, but because the slope was so steep that I was crawling as soon as I faced back towards it.

As soon as the adrenaline faded as I made my way up from the cliff’s edge, I found myself exhausted.  Luckily, the girls below were cheering me on and yelling words of encouragement, and I eventually made it up high enough where I was able to put my skis back on, and I traversed left into the gully that the other gals had skied down.

Finally, I was able to take a breath and enjoy cruising down the open slope, making turns in the amazing powder.  But, I was still a bit shaken up from my ordeal, and in a split second my ski tips crossed and I tumbled forward over myself.  Not a bad fall by any means, it was gentle terrain, soft snow, and I had been going at an easy speed; what worried me was the sickening crunch I had heard as I fell forward.

No, it wasn’t the crunch of a broken bone or snap of a torn ligament, but rather the crunch of a snapped ski!  I had heard tales of G3 skis snapping before, but was still incredibly surprised to pick up my ski and find that about halfway between the tip and the toe piece, the topsheet and core were completely snapped.  Luckily, the sidewalls, edges, and base of the ski were all still intact, so I gaged that it was still possible to ski on it, and I made my way down to the other girls.

I don’t think they believed me at first when I said “I snapped my ski,” until I took it off and demonstrated that the top quarter was visibly floppy.  I assured them that I could (probably) make it down just fine, as long as I took it easy.  So we continued, and we descended back to Hanging Lake, while I made gentle turns at the back of our group.

At the lake we met up with some of the others, and Melissa assigned me to sweep the rear as we headed down the icy skin track, since I had an InReach.  We made our way back down to the cars, thankfully without any further incidents, though I grimaced every time I went through a compression in the track, trying not to do any more damage to my ski.

We arrived back at the parking lot just in time before the gates closed for the day.  There we made plans to stop for tacos in Squamish, and shifted car groups around so that the people who wanted to go straight back to Vancouver could do so.  After the end-of-day faff, we departed the parking lot, much to the relief of the Whistler Olympic Park employees who were waiting for us to leave so that they could close the gate. 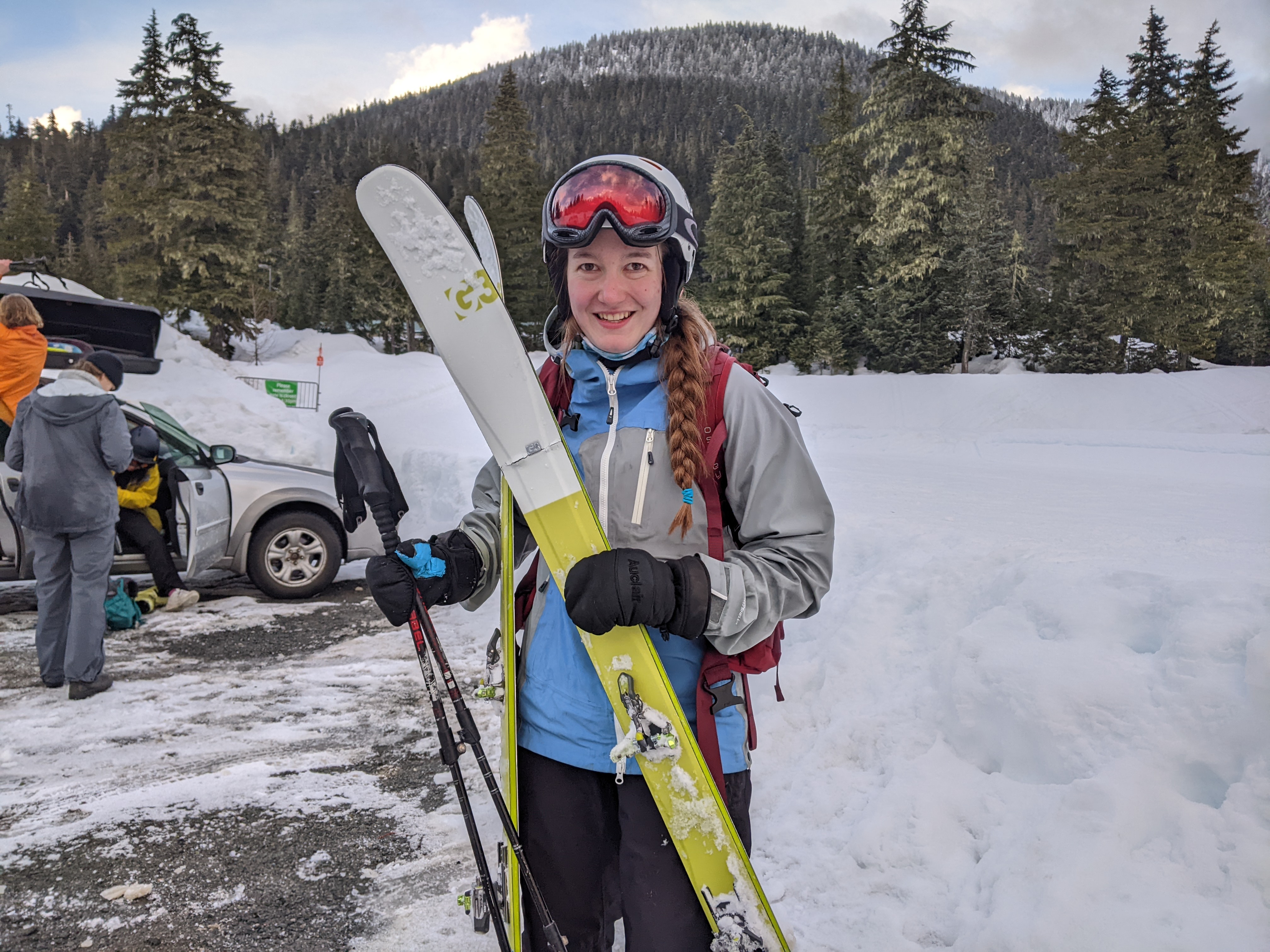 Tired and hungry, two of the cars (one of which was mine), made it to Luz Tacos in Squamish.  There we sat out on the benches in the parking lot and inhaled the delicious tacos and churros (thanks Melissa for sharing!), laughing about the day and throwing around ideas for future outings.  All in all, it was the ideal ending for a day that was truly a blast, despite the broken ski and the many predicaments I found myself in throughout the day.

Thanks to all the lovely ladies that made this trip so fun and memorable, and of course a big thanks to Melissa for organizing!