While the original plan for the trip was to visit Mt. Price, a string of weird weather this year dictated that snow conditions would likely not be safe there. Instead the call was made to switch to Brandywine Mountain. This trip was a celebration of Ross Campbell’s 10 year anniversary in the VOC, with his first trip being in June of 2012. 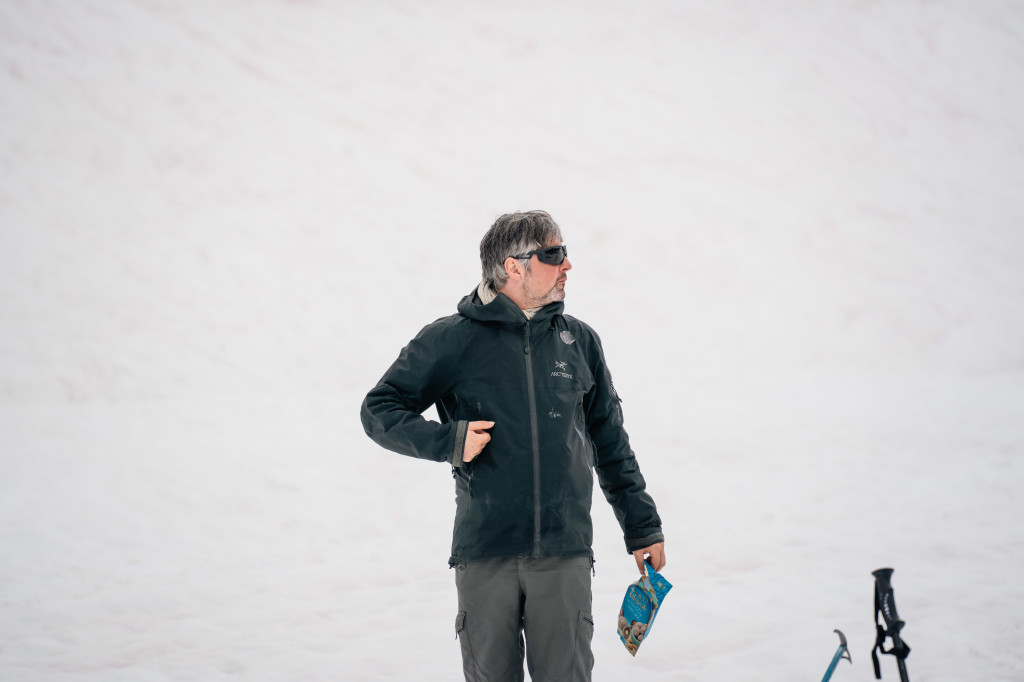 We left Saturday morning, crossing the Lions Gate bridge at 7am, full steam ahead through the classic Vancouver rain. We met up just after the waste transfer center near Whistler before convoying to the lower parking lot. Ed and Anton helped shuttle everyone’s rucksacks up to the upper parking lot in the back of their cars, saving the rest of us the struggle of making the hike to the trailhead with our fully loaded packs. Some deep snow and steep inclines meant that the upper lot was 4WD access only. We left the lower lot at 10am, and after congregating at the upper lot we continued on towards the meadows.

The road leading towards the meadows was mostly snow covered, and our large group of roughly 20 people moved at a reasonable pace. We made it to the meadows at 12:45pm having covered 6.5km from the lower lot, with a 650m elevation gain. After everyone dumped their packs, everyone broke into some lunch, after which we all set up tents. 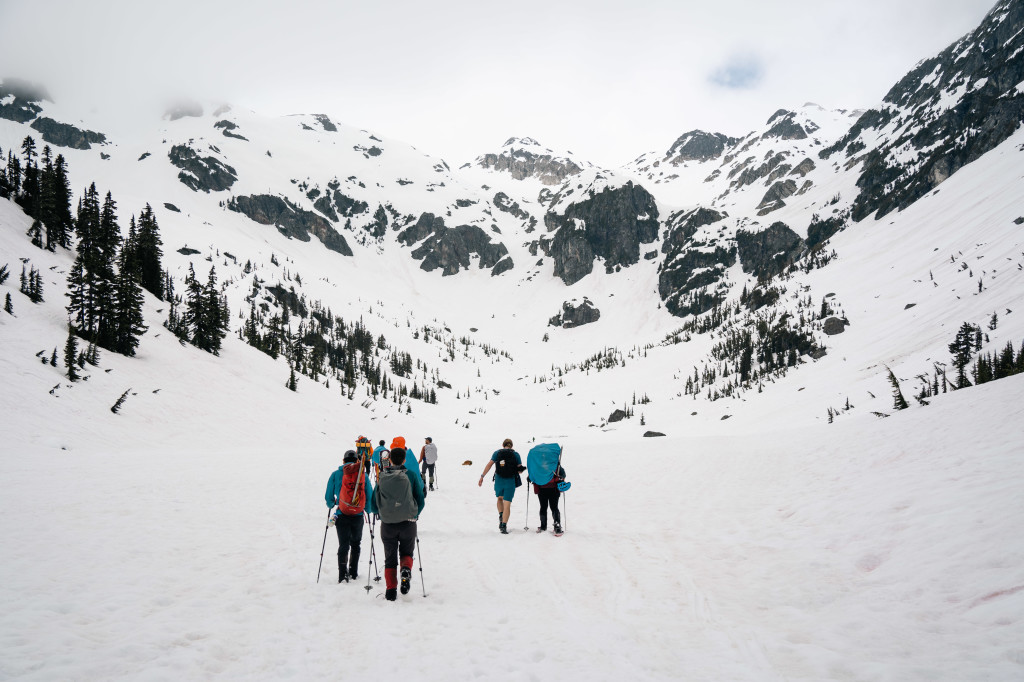 It was at this point that a camp wide effort to construct a communal seating area began. Taking turns, we excavated enough snow to build a ski hill, with some notable features being Ivan and Paul’s ice throne, Estefanny’s cold couch and Ketan’s slippery stairs. Ross, Anton and Duncan also dug a staircase down to the nearby stream for access to drinking water.

After shoveling for a while, around 3pm, the group still had plenty of energy to spare. Anton and Haley decided this was a good opportunity to run an impromptu training session on how to self arrest with an ice axe. I can only imagine the views as a group of us threw ourselves down a hill repeatedly in an effort to practice different self arrest situations. After 45 minutes of practice, the adrenaline wore off and the cold set in so we headed back to camp to warm up. Jacob set up a beacon search and rescue scenario for people to learn and practice with their avalanche beacons. 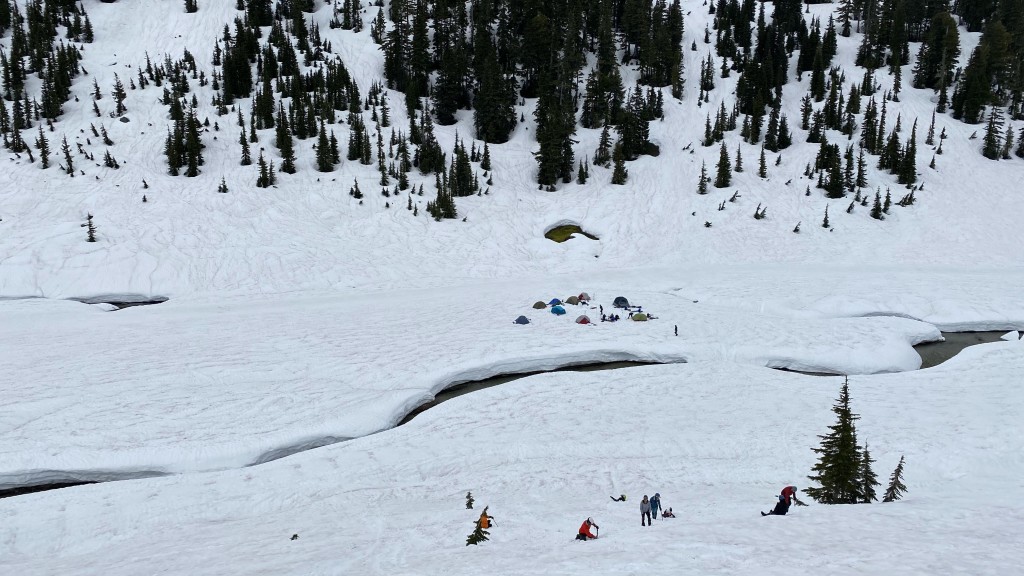 Around this time, we began preparing dinner, congregating in our newly constructed seating area. Dodging the occasional rain shower, everyone managed to get their meals together, most notably Duncan, who brought frozen Borscht. 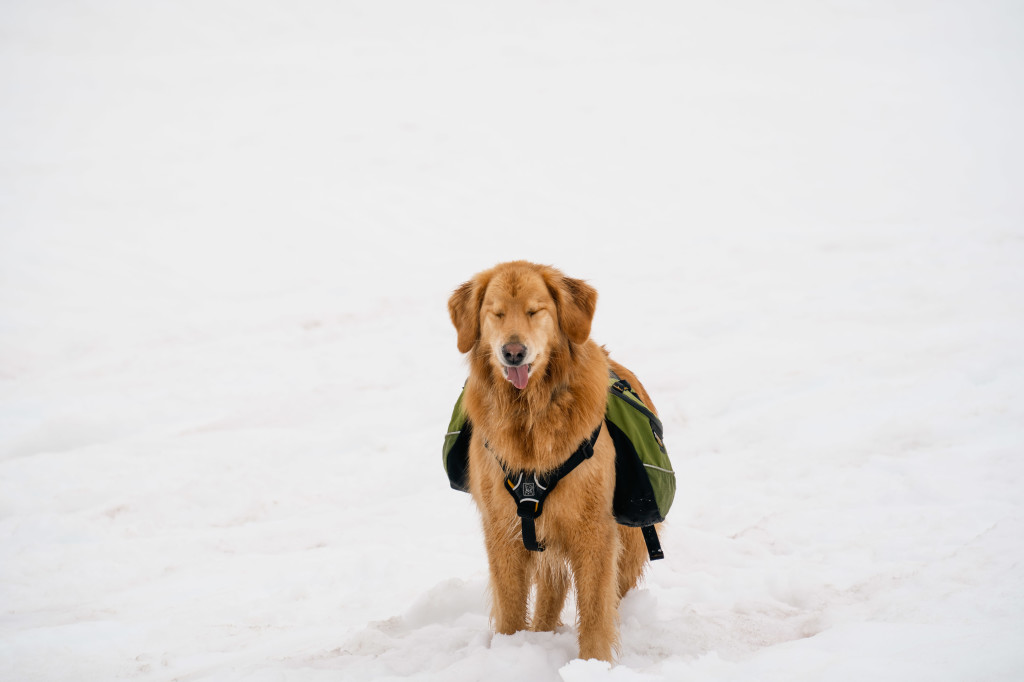 After dinner, a couple bottles of whisky magically appeared. This was no problem for our group of magicians as we rapidly managed to make them disappear. After we’d all finished our magic show, Ross surprised us with some VOC song books. Morales were high as we belted out the classics. Simultaneously, a game of frisbee with the group’s mascot Buddy began. After successfully burning off all our excess energy, we headed to bed around 8pm, preparing for the early morning ahead. 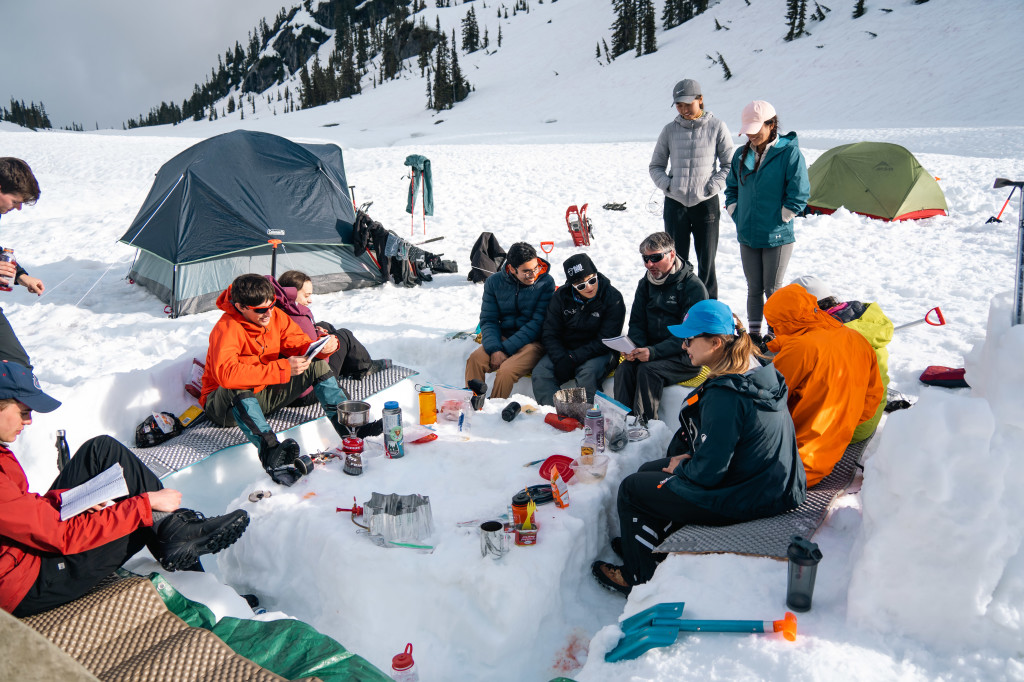 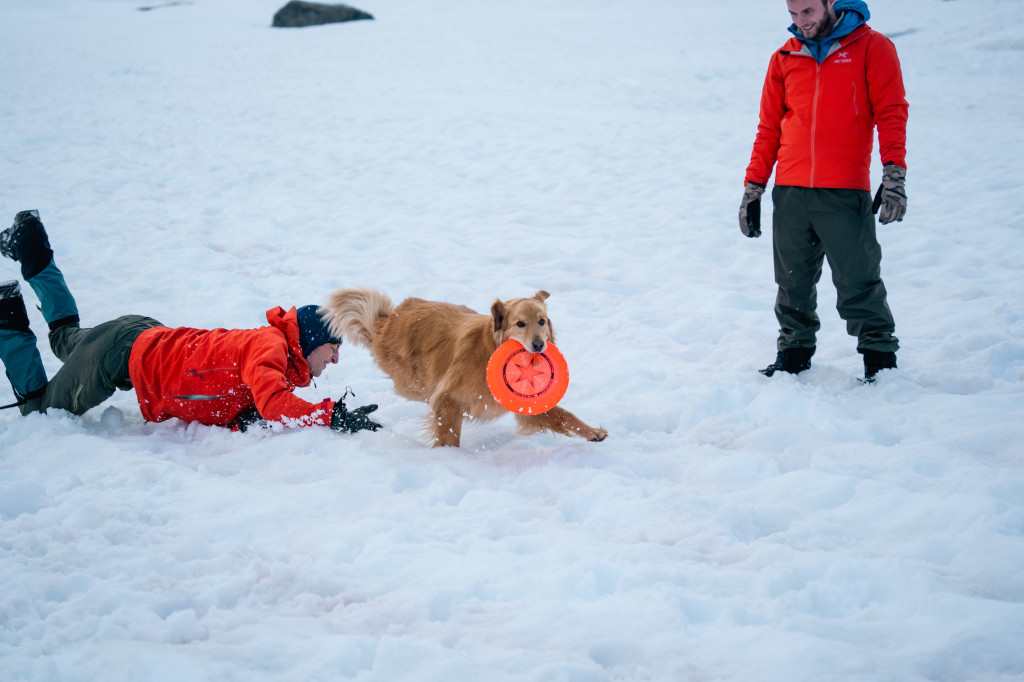 Ross woke us all up at 4am (positively luxurious compared to the original plan of 2am). Hazy and excited, we ran a beacon check and started our way up towards the peak around 4:45am. After making our way out of the clouds we found ourselves bathed in sunlight. Ross called the cut off time at 11am, while we continued to monitor the snow conditions on our way up. 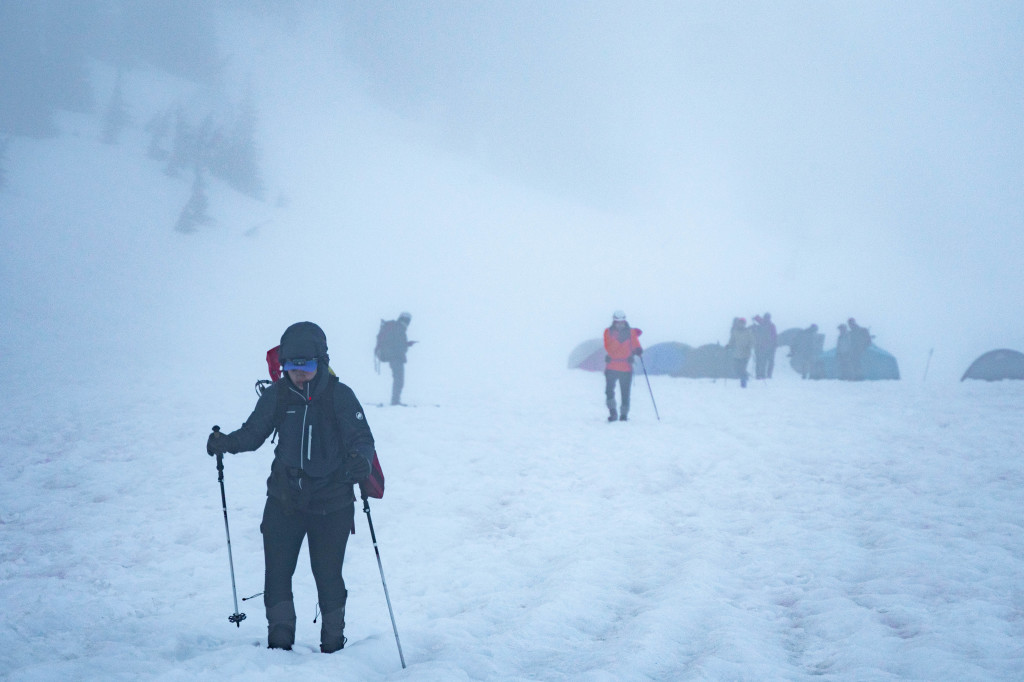 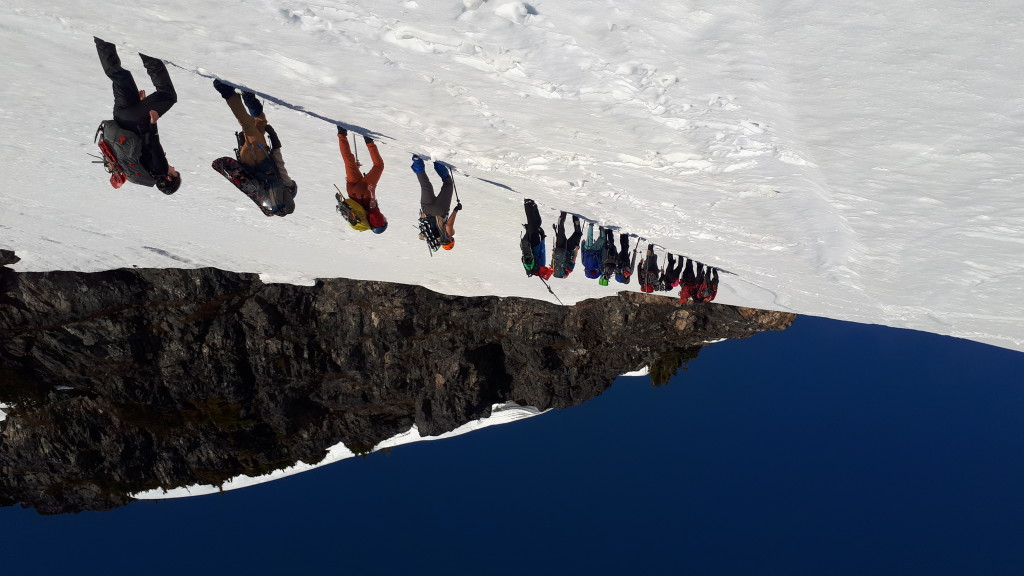 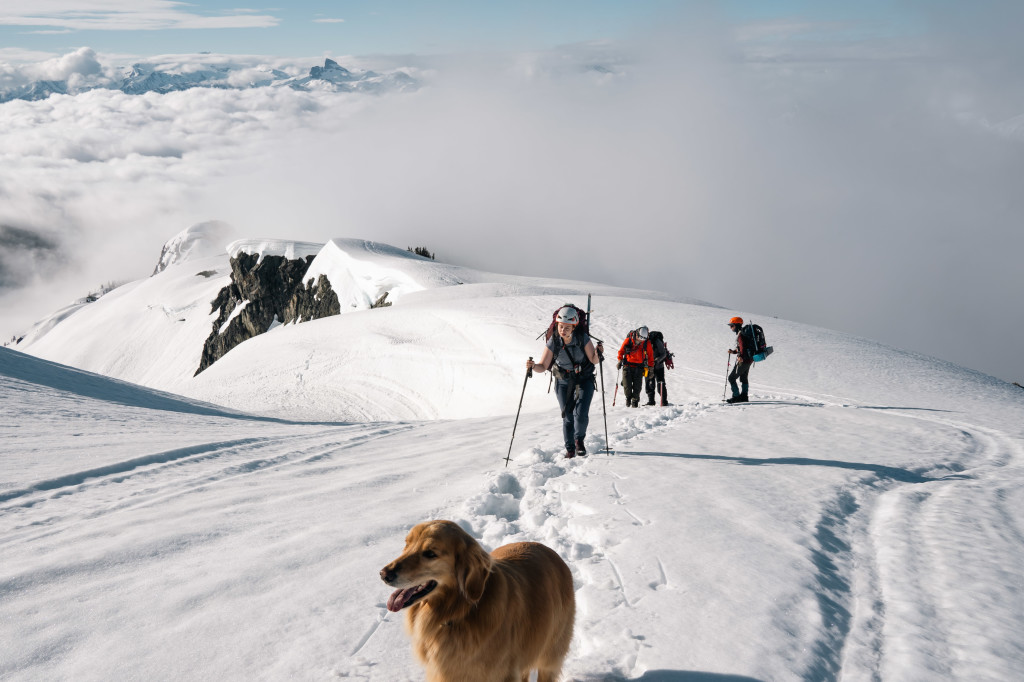 Around 8am we were on top of the ridge, somewhere around the 2000m elevation mark. The ridge was somewhat exposed, with some large cornices on the Eastern face of the mountain. On the ridge it became apparent that the group was split into two groups about whether to continue. A group of ~8 moved past the ridge to evaluate the conditions and the rest of the group moved back to a safer spot to figure out the next move. After a few minutes, it was decided that the group should turn around and head back down. Slushy snow and warm conditions meant that this was the safer option. 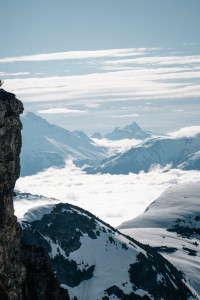 The view from above the clouds, Credits: Matthew Drenth The view down to the meadows, Credits: Matthew Drenth

The trip down the hill was significantly shorter than the way up, but significantly more enjoyable. Most of the way down turned into a giant slide. Following in each others paths the slides got faster and faster. It took roughly an hour to get down with us reaching the tents around 10:15am. After a quick breakfast, we packed our tents, filled our water bottles and headed towards the cars. We left around 11:30am, making it to the cars around 1:30pm. After some fresh socks and some shuffling of gear, we agreed to meet at Mags 99 in Squamish for a quick bite.

Overall I’d say we had a successful trip. For some, this was their first backpacking trip, for many this was their first time camping on snow, and this was my first VOC trip. While we did not get a chance to summit Brandywine, we did meet some new people (and Buddy), share a fun experience and capture plenty of pictures.