Posted on December 13, 2011 by Samuel Belanger-McKoy

Dec 12, monday morning I’m awake much too early watching Breanne and Merick take off for another adventure. Disappointed I can’t join, I start trying to console myself with the reasoning that this past weekend was more than enough to satisfy my addiction to skiing (for now).

My argument starts out in an attempt to convince myself but it becomes more and more legitimate the more I reason. The moon, the dogs, the skiing, the songs and the people. 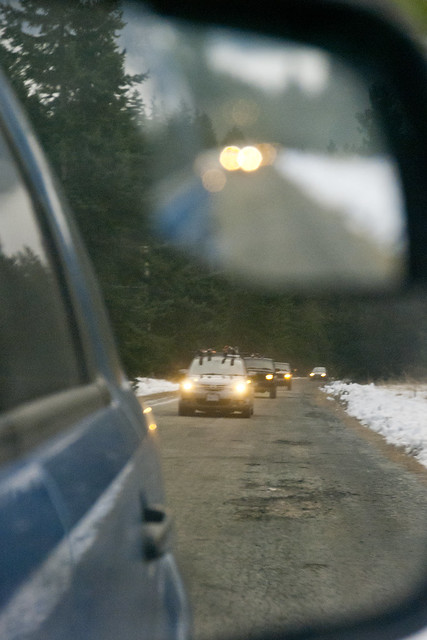 Our squad of cars coming up. Photo Ran Zhang

22 of us gathered saturday morning at the Petro-Can in Pemberton with 3 more joining us later at the hut. I, the birthday boy to be, came running along a few minutes late but Kathrin, the birthday girl to be, was there with everything organized and under control. It was a quick chance to say hello and learn names that I would forget at least 5 times more. As the last car pulled in we rushed off to the trailhead. Fast forward 45 minutes and the excitement has exponentially risen as we fumble with our skins. Some were complementing their heavy packs with happy thoughts of what the weight implied: food, chocolate and alcohol.

As the front group started making their way up they were followed by a couple of excited dogs that had greeted us while we skinned up. Unsuspecting that they would follow us to the end of the world (or at least deep into the mountains) no one bothered to usher them home. Without too much hassle we made our way up the skin track and regrouped at the last creek crossing.

On the way up we couldn’t help but notice the large craps on the side of the skin track, some of which someone had tracked through. At first we thought they were too big to be the dogs but they were way too frequent to be human either. This implied the dogs came up there a lot and obviously eat hefty meals. 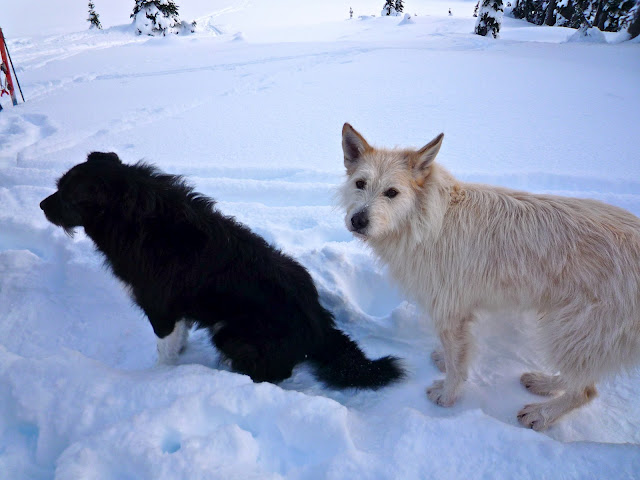 We reached the switchbacks and as Tim Blair had warned they were icy. Luckily we reached them at a warmer time of day and it wasn’t too bad. Ran and Merick played hero in the back helping out Emma and Adam having a hard time split-boarding over the icy sections. We would later find out that they had brought food worthy of the effort.

It wasn’t long before the snow softened and progress quickened again. The lake came in sight at two and we (literally) raced across in excitement. After catching up with the front group already unpacked and ready to ski, Nick and I dropped our packs to go back and help out our split-boarding friends. While taking off our skins we realized this would be our first legitimate run together. Nick’s glissade down the Aussie didn’t count. To our surprise Emma and Adam weren’t far so we worked our way back up together and once at the hut, we enjoyed some pre-dinner snacks, laughs and discussion. Those who had gone out to ski cabin hill trickled back in with a good snow report.

Dinner proceeded. Everyone had a variety of meals but overall the smell of the hut was intoxicating. Thomas (or was it Tom? or Julien? or Martin?) was playing the guitar, forgive me I forget who it was. All I know is that everyone took part in some pretty good singing and this is where one could nod, tap their feet, look at all the chocolate and alcohol on the table and think “This is going to be a good night.”

But before many of us could even touch the alcohol, it was time for a few more runs under the moonlight. If the snow was in school it would receive a smiley face sticker on that white surface. We definitely wrote on the slope in an A+ fashion.

After returning to the hut with smiles as bright as that full moon, drinking ensued. Accompanying the music, more chocolate kept making it’s appearance on the table to my dismay. David, Jessica and Christian H. arrived after leaving later then the rest and they were just in time. The music became louder and I even sang a little to music like the Beetles, House of the Rising Sun and the vocal goodness of Great Big Sea. Concoctions of rum and hot chocolate, moonshine, fireball and who knows what else were passed around. I also had to embarrassingly admit to my chocolate addiction after pulling out a mountain of Lindt chocolate wrappers out of my pocket. Merick,  to my surprise, laughed after having hauled these chocolates up.

Ah but I had forgotten the dogs. As the party ensued, the dogs kept to themselves outside but near the hut bundled and comfortable in all their fur. When we would later invite them in after food had been stowed, they came hoping for a meal and would continue outside after fruitlessly sniffing. Very calm nice dogs.

By 11pm waiting for December 11th was hard but we passed time in wait of midnight. When the clock finally struck 12 it was big hugs and a last bit of celebration before hitting the hay. Kathrin and I, although 10 years apart were both incredibly happy to be celebrating up at the Brian Waddington hut. Resolved to ski one last run, I yelled about to scout for interest. Jessica and Artem were in and gone were the tired eyes after seeing the brightness of that moon. Artem did make a little bit of a mistake here but I’ll get to that in just a bit.

We made our way across the lake but halfway across something seemed to hit Artem. He fell over on the flat ground and after getting up seemed to be a bit wobbly on his feet. Oh alcohol. Artem had decided to have one last (but excessively large) drink of rum before heading out and needless to say it hit him like a wall. As soon as the uphill started, he didn’t make it 5m. Evidently it was the skins so Artem sensibly decided to wait on the lake. Jessica and I made our way up and although the snow was the “nice try”-sticker type the both of us enjoyed a relaxed run through the long moonlit shadows cast by spaced trees. I also had the chance to apply my newly acquired ski instructor skills. At the lake we had noticed Artem had returned to the hut and as we arrived back at the now quiet party venue we found Artem in an awkward ball in front of the door skis still strapped to his feet. Jess helped out, carefully avoiding Artem’s repeated ski javelin throws. In the hut she continued to help him with his boots as I fished scraps for the dogs. When it was time for bed, Artem wouldn’t move from the bench so Jessica and I headed for the loft. As I carefully made my way in between two sleeping bodies, Artem came stumbling in nearly stepping on heads and collapsed in the fetal positions in between two others. Thank god he was near the window because moments later he got up and fumbled with the curtain. I can’t remember who it was but this person helped Artem open the window before he burst all over the birthday girls head. Applauds to you for getting that window open. Our drunken fellow head butted his way through the mesh and continued to puke over on the solar panel for a solid half hour. After all the commotion was over, he passed on on his un-inflated mattress without a sleeping bag. At 5am he would wake a few when finally inflating it. Artem you may have interupted some people’s sleep but it sure makes a good story and an even better way to end the night. 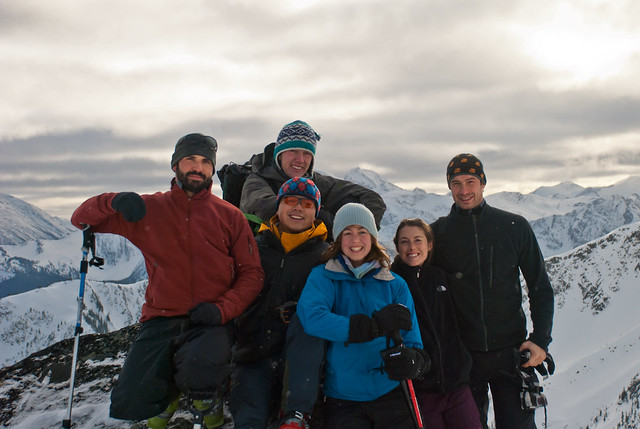 A nice group shot, the other 19 were busy skiing. Photo Ran Zhang 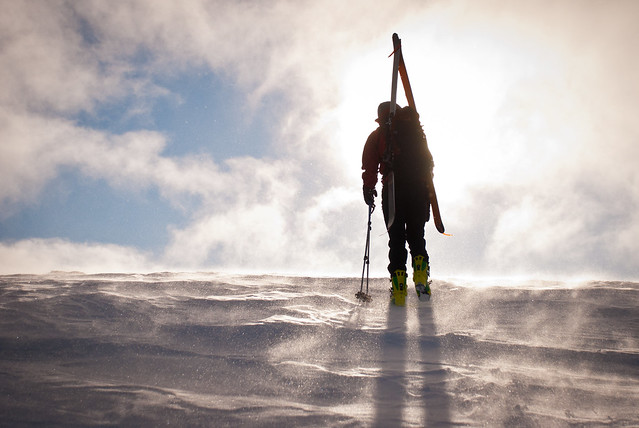 The next day the grand majority of us went out for some skiing. Although we all went at our own pace, everyone headed for Peregrin Col following Tim and Scott Nelson’s tracks from the previous weekend. When I say everyone, I should also say that the dogs continued to follow us as well. But surprisingly, here the dogs split up. Some continued to ski directly down from the col while other went for Return of the King. I missed seeing the siege of skiers upon snow but the black dog stuck around guiding the larger half. Nick, Christian S, Will, the white dog and I proceeded to ski the south side and work our way west and back around over the col near Gandalf. The south aspect had a bulletproof crust that made the metal edges go ouch but the views from that little valley were astounding. Being that it was my first time to that neck of the woods, I couldn’t help but marvel at all the different types of mountains I have surrounding my home in Pemberton. The area will need revisiting. We continued to contour around the backside of Peregrin peak with the dog effortlessly following. We then boot packed along the ridge following our white wolf as she led the way up the rocky spine. Stopping for lunch I forfeited my tuna and granola bar lunch to the dog for her guiding. She then sat staring into the distance looking at the mountains. Her back to us I watched her for a bit and it was just one of those moments. Long white and beige fur flicking in the gentle breeze, quietly sitting, completely still, staring out into the majestic landscapes. At that very moment probably the most beautiful dog I’ve ever seen. I would steal her but I know all too well her spirits’ too free. I want her puppies… 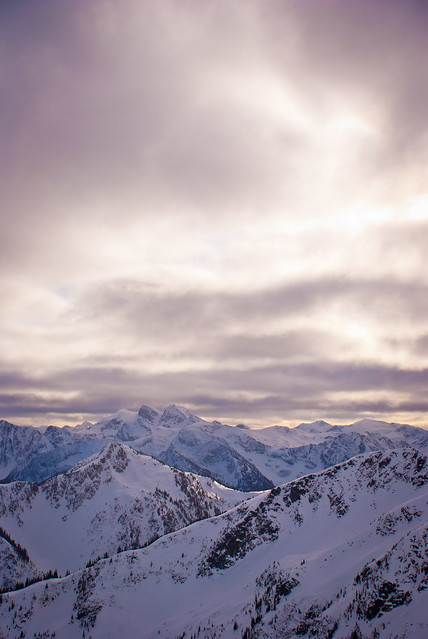 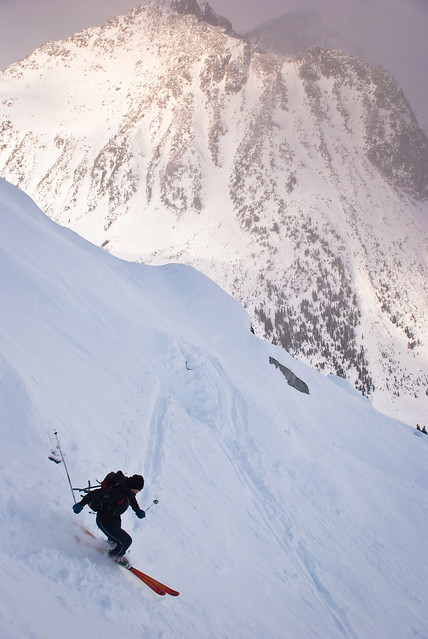 Artem making some nice turns with Gandalf in the background. Photo Ran Zhang

After eating we reached the top of our line and then skied the north aspect of Peregrin Peak back towards the hut making some nice turns. Nick and Christian proceeded for one last and apparently the best run of the day while Will and I joined those ready to leave.

Most people had taken off earlier and I made my way down with Ran, Christian H. and Olek making an initial sweep. Later I caught up with Kathrin and Jessica and we continued to casually make our way down. Ryan Nick and Christian S. would come a bit later but without any problems. And so, without much more to the story, our weekend ended there.

The majority headed to the Pony for a large dinner and final happy hour before heading home while a few of us ski bums went to join my family for a birthday dinner and to watch All.I.Can followed by more dreams of more skiing.

Looking back on this two thousand word summary of the weekend, I think I’ve managed to convince myself that this weekend has temporarily satisfied my addiction for both skiing (and apparently chocolate). In other words, it was an amazing time and my 19th birthday will go down as my best birthday to date. Thus concludes the 19 reasons to host two birthdays in a VOC hut.

Forgive me if your name isn’t up there and part of the story (maybe you should pull an Artem), but this trip wouldn’t have been what it was without Kathrin, Nick, Gordon, Brianne, Jessica, Martin, Julien, Ryan, Jeff, Thomas, Christian S., Diego, Olga, Ran, Merick, Artem, Breanne, Will, Tom, Emma, Adam, Christian H., Olek and David. Thanks everyone for joining.